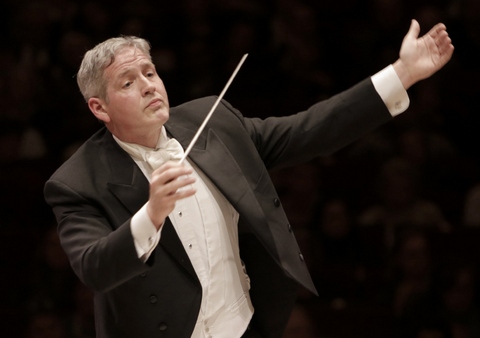 Led by David Hayes, Music Director, the New York Choral Society and Orchestra, together with first rate soloists and the Princeton Girlchoir, presented a magnificent performance of Felix Mendelssohn’s magisterial 1836 oratorio St. Paul on January 25, 2015 in Carnegie Hall. Mendelssohn’s oratorio is a huge work; on this afternoon, the work’s sweeping monumentality was fully realized without any loss of musical subtlety, nuance or detail. From beginning to end, chorus and orchestra alike presented the music they cleared loved with unflagging energy and endlessly renewed, fresh passion.

St. Paul tells the dramatic story of Saul of Tarsus, Jewish judge and prosecutor, and his conversion of heart to the teachings of Jesus. The work opens with the execution of Stephen, Christianity’s first martyr, presented as one of Saul’s judicial triumphs, then shifts to Saul’s experience on the road to Damascus, moves to the now-Paul’s triumphant teaching in the face of paganism and his final commitment to peripatetic preaching and what the audience and chorus know will be his ultimate martyrdom. St. Paul’s German text is taken largely from Biblical passages chosen by Mendelssohn himself. The oratorio’s direct theological and musical lineage comes from Bach’s great Easter Passions: using as many references to Bach as he does, Mendelssohn aligns his own musical inspiration from Bach just as the oratorio tells the story of Paul, the first Christian convert, whose own rebirth resulted from Jesus’s death and resurrection.

The oratorio is divided into two sections; in this performance, there was one intermission. As is typical of New York Choral Society performances, all the singers’ enunciation of the text was exceptionally clear and crisp, but the English supertitles over the stage were nonetheless very useful. In a brief technological glitch close to the beginning of the concert, the supertitle screen malfunctioned; Hayes waited for almost two minutes of silence as the problem was resolved so that for the rest of the concert the English text appeared exactly when it was supposed to.

Throughout the work, the chorus serves several functions. They are sometimes participants in the narrative as instigators or witnesses, sometimes carriers of human reactions to the dramatic story, and sometimes messengers of prayer, lamentation, supplication and praise. Under Hayes direction, the chorus as a whole and in all its sections and parts, was clean in attacks, entrances and cut-offs. Complex fugues were rhythmically and harmonically clear. The New York Choral Society chorus has a large and subtle range from pianissimo to fortissimo, well suited for the demands of Mendelssohn’s score.

Like the chorus, three of the four soloists had multiple functions. Only the baritone had a distinct “role,” singing as Paul.

Soprano Sarah Shafer, mezzo-soprano Haejung Shin and tenor Vale Rideout each had responsibilities as narrator, as individual character and as embodiment of meditation and imprecation.

The greatest narrative burden was Shafer’s. Her rich, expressive voice made her a deeply empathetic reporter; her prayers were both unsentimental and trustingly intimate.

Tenor Rideout also narrated parts of the story effectively, but was even more compelling when he sang briefly scored individual roles such as Stephen and later Barnabas. Rideout’s flexible, strong voice was well suited to a wide variety of emotions from horror, lament and despair in the face of fanaticism’s violence to companionability in apostleship with his spiritual brother Paul to joy in the depth of his faith.

Mezzo Shin sang only once in the performance, in the first part: Mendelssohn’s reasons for writing so little for this voice in this work are unclear. Singing without a score, Shin told her small portion of the story with unshakeable authority. Her splendid, lush declaration that “God will forget not his own” was both imploring and majestic, a passionate assertion of the identity of both past and future in God’s capacity for salvation.

Because baritone Mark Delavan had the only “role” in the oratorio, he was the only principal who had any opportunity to develop his character. Delavan’s Paul was an earthy, vigorous man, monolithic in his wrong-minded judicial certainty, undone by his blindness and crisis of identity, and endlessly, vigorously grateful in his newly birthed faith as a follower of Christ. In fact, the libretto of the work does not leave much room for psychological growth in Saul/Paul, but Delavan sang the role with conviction, making his apostle a man whose faith could quite plausibly be a guiding beacon to all who might follow him.

One of the most surprising and rewarding moments in the whole work comes in the middle of the first part. When Saul – soon to become Paul – first hears God’s voice, it is a treble choir. In this performance, the Princeton Girlchoir, high up in a Carnegie balcony, embodied the divine: this fine choir’s secure, sweet sound made the rich revelation of God’s truth at once ethereal and entirely plausible. Particularly in this performance, the shimmery delicacy of the trebles constituted a fine dramatic balm to Delavan’s rumbling baritone anguish. Applause for the Princeton Girlchoir and their director, Lynnel Joy Jenkins, at the end of the concert was well deserved.

The conclusions of both the first and the second parts of St. Paul are scored with breathtaking grandeur … and were gorgeously presented in this performance. The appropriate, happy and enthusiastic Bravos of the almost-fully-packed Carnegie Hall audience at the end of the almost two-and-a-half hour long concert felt just right; and in the hours and days following, the memory of the performance, centering on the full-hearted passion and unerring musical integrity of all the musicians remained strong.

But Mendelssohn’s St. Paul is a complicated work, and there are many reasons for which it is less well known and less frequently performed than other similarly large nineteenth century sacred choral-orchestral works.

It is indeed a dramatic work: martyrdom for faith, radical religious conversion, an assault of blindness and then redemption of sight are all certainly among the most dramatic possible human experiences. Yet the dramatic content and pace of St. Paul are uneven. The opening movements, in fact, would lead one to believe that this is going to be an oratorio about St. Stephen. In the second part of the piece, the pagans’ identification of Barnabas with Jupiter and Paul with Mercury falls in some awkward place between limp satire and unamusing pedagogy. Frequently throughout, psychological woodenness dulls the subtleties of some human calls to God.

There is beautiful music written for the soloists, but the most marvelous passages are those orchestral and choral passages that identify the deeper subject of the oratorio whose topic is an examination of the conversion experience of a Jewish judge who becomes a Christian apostle.

St. Paul is about ancestries and inheritances. It is an historical account of Judaism as ancestor and progenitor of Christianity, about Saul/Paul as the single figure who most embodies that ancestry. The socially expedient and sensible conversion of Mendelssohn and his family from Judaism to Christianity had little to do with an experience of the soul like Paul’s, but it made visible the convergence of intellectual traditions which Mendelssohn inhabited and which constituted the some of the context of his creativity.

The ancestry most deeply explored in St. Paul is not that of Judaism and Christianity but of Bach and Mendelssohn. The most gorgeous choral and orchestral writing in St. Paul is that which Mendelssohn inherited from Bach. When Mendelssohn quotes Bach directly, he does so openly and with spacious gratitude; even when the quotations are not direct – even when, in a few passages, they are almost unconscious – they are both proud and obeisant.

If the oratorio is uneven in its theatricality, it is nonetheless successful as a celebratory transmission of ideas from one musical genius into a future era through the gifts of a differently gifted composer. In both plot and musical content, Mendelssohn’s St. Paul is the child of Bach’s great Passions.

A marvelous performance of St. Paul, such as the New York Choral Society and Orchestra gave, lingers in the imagination not because the work transformed our understanding of the conversion of Paul or deepened our apprehension of the Christian God, but because it illuminates Mendelssohn’s sense of himself as an inheritor of Bach’s genius.