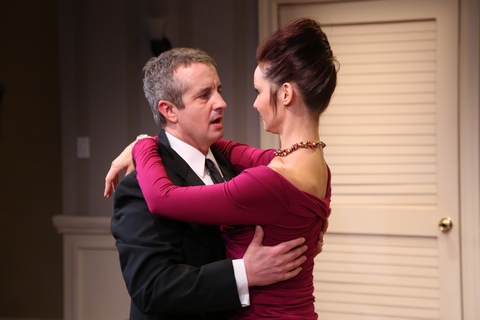 On the surface, Maggie Bofill’s Winners appears to tell a familiar story of middle-class suburban misbehavior. Father Brian (Grant Shaud) has been laid off and mother Mabel (Florencia Lozano) has become the breadwinner. Son Tommy (David Gelles) is in high school and has been fired from his stockroom job; daughter Gabby (Arielle Goldman) is in middle school and a semi-permanent sulk. It opens in their eat-in kitchen, so at first it appears we have literally kitchen-sink realism…except we also have their dog Buck (Curran Connor) and their cat Marie Antoinette (Stephanie Hsu) who talk to us and to each other. (They’re neither chorus nor omniscient narrators, they really are a dog and a cat doing dog and cat things and expressing dog and cat thoughts.)

Other than the funny animals (and they are truly funny), the most interesting embellishment is that Gabby is a fledgling playwright. Thus for the annual Christmas pageant, she decides that Christ’s Three Wise Men are kind of like superheroes, come to rescue the babe from the Massacre of the Innocents. It’s a great riff, nicely expressing how she feels abandoned by her self-pitying parents without being too blunt about it. Director Pamela Berlin comes up with some excellent stage pictures for this, too.

Now about those parents. Brian has no surprises for us, even though he’s at the center of the story he’s almost entirely passive and predictable. And Mabel, well, that’s where things get interesting. She’s very unhappy about being the breadwinner, and has been acting out, first by withdrawing emotionally from Brian, and second by starting a fling with her boss. As she explains it, her boss “is someone who makes it clear that he respects what I have to say. Who makes me feel like I have potential – a kind of potential he can not only match – but top. And I like to be topped, Brian. Okay? I like to be topped.”

This is unexpected. Is she really saying that she needs to be…dominated?

That hypothesis is indeed supported by an earlier sequence. Brian’s old buddy Bill (Scott Sowers) suggests, apropos of Mabel’s coldness, “You know what you need Mackey? You need to give your woman a good hard smack in the ass. Let her know the bull is back! She’ll love it!” And here’s the surprise: Brian tries it, and she does seem to like it. So when that other speech comes, it’s clear that she’s instinctively submissive, but doesn’t realize that her narcissistic insistence on it is destroying her relationship to the people whom she says she loves.

So far, so good. Her blindness to this is effectively the engine of the play, the thing which disrupts the status quo before the curtain rises and which needs to be resolved. Unfortunately, as Brian never recognizes it for what it is, and neither does Mabel, it never does get resolved, or even clarified. By presenting Mabel’s actions as sinful but understandable we’re left with the odd and uncomfortable thought that the playwright doesn’t see Mabel’s problem for what it is.

This seems unlikely, and yet the writing of the adult characters is consistently less interesting and effective than the rest, which does imply a problem of authorial perspective. Right off the bat, the long and talky second scene (between Brian and Bill) could be eliminated entirely by adding a line or two to the next one. (It’s not clear why the director didn’t suggest big cuts here.) Their other scene together isn’t much better, and because Brian and Mabel never really make any progress in understanding what’s gone wrong between them their scenes tend to be arguments that circle in place. 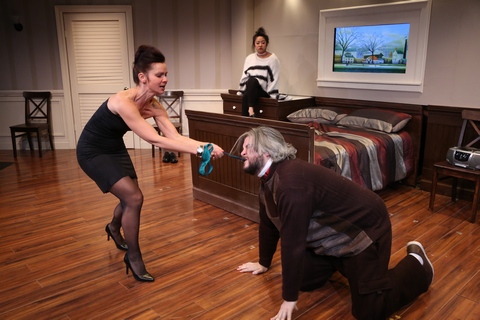 Although I was never bored, at 135 minutes (including intermission) the play is quite long for the story it’s telling. The animals, as fun as they are, get a considerable amount of stage time but never move the narrative forward. They even get solo spots where they recite beat poetry, which are brilliant and amusing but stop the show dead. Even money says that if the parents’ through line was clarified and strengthened this play would slim down easily to a more appropriate length.

Shaud’s performance as Brian is terrific, so clean that it’s transparent, the kind where you start assuming the actor is simply being himself (which I’m sure he isn’t). Ms. Goldman plays Gabby with a wonderful piercing stare, but the actor (who appears to be at least of drinking age) doesn’t really get close to showing us an eleven-year-old, even a precocious one. Ms. Lozano does what she can with Mabel, and cannot be faulted if the character doesn’t add up. (She might have gone for broke and let Mabel’s narcissism run riot, but that might not have improved matters either.) As Tommy, David Gelles does a good job of breathing life into what is basically a nicely imagined stock character. Connor and Hsu steal every scene in which they appeared, comic relief personified.

Although this play is ultimately less than the sum of its parts, Bofill has created a few great characters and shows a knack for plotting. I do look forward to whatever she does next.

On the production side, scenic designer Jason Simms and lighting designer Seth Reiser made such good use of the L-shaped EST space that for once I didn’t notice its inherent awkwardness. Kudos to them both. A TV screen usually seen in the EST lobby was cleverly repurposed as a pseudo-window (video design by John Erickson).

Alas, the costuming (by Sydney Maresca) had some problems. The dialogue makes reference to Gabby wearing many layers of clothing, but we couldn’t really see it even when it was pointed out. A big mention is made in one scene of Brian wearing “black tie,” but it didn’t look like a tux at all, just a gray business suit. (On the other hand, Marie Antoinette’s “fur coat” was perfect.)

Sound design (M. Florian Stabb) was fine. The dialogue calls for the Beatles song “Because” which is a mistake; as is usually true in such cases, the author feels that some favorite song of theirs will have a similarly rich resonance for the audience, but in reality it’s just another pop song to most of us.