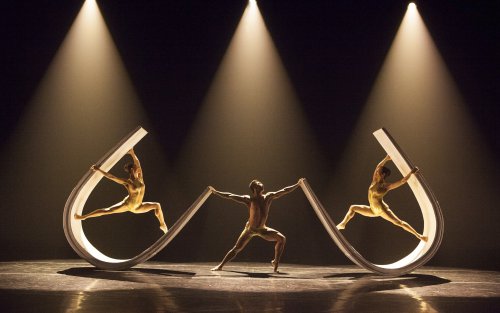 Moses Pendleton’s Momix has returned to the Joyce Theater for a month-long season.  Pendleton’s 90-minute Alchemia is a theatrical fantasia about inchoate myths of creation, at least according to his extensive program notes.  It’s his version of a cosmic fairy tale brought to life with his usual astounding command of stagecraft.

The suite of discrete scenes, distinguished by quasi-poetic lines in the program notes and a series of obvious theatrical gimmicks—tall columns that become ancient weapons; ultra-violet light revealing intricate patterns of blood vessels; women gliding about in floor-length gowns that later cocoon them; young lovers floating about each other; mirrored booths that confuse who is where; etc.—paints a vivid portrait of a constantly shifting land populated by gorgeous creatures dressed in astounding costumes by Phoebe Katzin.

Putting aside Mr. Pendleton’s penchant for pretentious over-explicating and mythologizing, what is left is an entertaining hour and a half of muscular performance art that lies somewhere between Cirque du Soleil in its Las Vegas Mode and artsy exercise classes.  Pendleton’s movement themes are simple—running, rolling, lifting—performed with a surprising combination of robustness and delicacy.  These dancers, whose identities are too-often hidden beneath layers of cloth and plastic, are sensational.  That they all emerge as individuals despite the dramatic camouflage is a tribute to them and to Mr. Pendleton’s eye for talent.

Movement themes, simple as they are, are often repeated well past their effectiveness.  After the initial pleasure of watching the women sliding silently back and forth in their long dresses in the section “The sisterhood of the Moon at the alchemical wedding,” it becomes too much of a good thing, not taken to the next level.  Even after the aforementioned columns make their initial appearance as eerie, magical icons, Pendleton won’t let them go and has the men blow into the tubes, carry them across their shoulders, make little constructions out of them, etc., proving his cleverness. 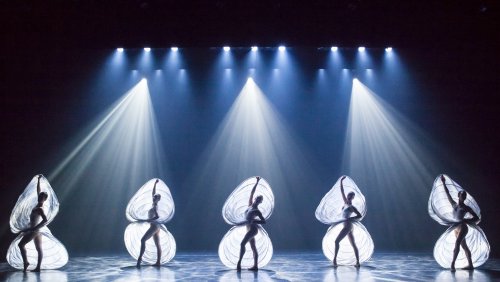 There were some exquisitely constructed moments such as a gloss on Adam and Eve in which the suspended Eve’s wind-tossed movements provide some real emotional depth and a gymnastic free-for-all in which huge U-shaped set pieces become a playground for the dancers, bringing Alchemia to a boisterous conclusion.

Throughout the show, Michael Korsch’s lighting provided mind-blowing imagery.  The music Pendleton chose was taken mostly from film scores, and, though overwrought, provided aural support for his ideas.

Momix, for better or worse, is an established and much-loved presence in the dance world.  No matter what brings you to the theater—the overblown mythology or the stagecraft—you will be in the presence of exciting—portentous?—theater that will often amaze and overwhelm.