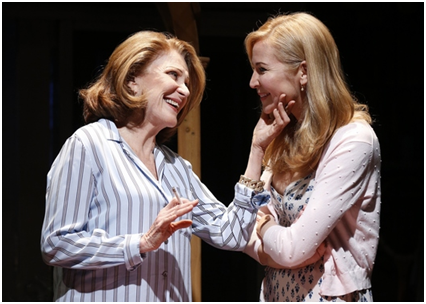 Linda Lavin and Jennifer Westfeldt in a scene from Too Much Sun (Photo credit: Carol Rosegg)

“People surprise you. All the time. Just when you think you have them all figured out,” are lines of dialogue that encapsulate the poignant theme of Too Much Sun, Nicky Silver’s intriguing and finely realized new play.

“I don’t know what the fuck I’m doing up here. I mean I don’t know what the hell I’m talking about,” exclaims Audrey Langham, “a little bit famous” aging actress having a meltdown during a technical rehearsal for a soon to open Chicago production of Medea, “at an important theater.”

Garbed in a flowing rust-colored gown and cape and with an elaborate crown, she can’t remember her lines and lashes out tempestuously at her director. After this hilarious opening set piece, the action shifts to a Cape Cod deckhouse rented for the summer by her estranged teacher daughter Kitty and advertising executive husband Dennis. Their next-door neighbors, retired WASP grandee Winston, his gay 20’s pothead son Lucas, and Gil, the hapless young assistant to Audrey’s agent completes the cast of characters who all surprise.

Over a 25-year career as a playwright, Mr. Silver has become known for his eccentric black comedies with abrupt shifts in tone. This one feels like a breakthrough being his most ambitious and successful on many levels. Seemingly a conventional performer mother versus angry abandoned daughter family conflict, it goes way beyond the expected with great aplomb. The witty characters all converse naturally in sharp one-liners and zingers but also are volatile, exploding with fury. The often astonishing plot twists and dark revelations unfold with searing believability.

“Cancel the swans… And the boxes of butterflies too,” sighs Audrey while planning an event. Spoken by Linda Lavin with her sublime comic timing and glorious facial expressiveness, this role joins her gallery of triumphantly memorable New York stage appearances. These have included Broadway Bound, Death Defying Acts, The Tale of the Allergist’s Wife, Collected Stories, Other Desert Cities and Silver’s The Lyons. Here she not only gets to act ferociously but gets to display her considerable musical talent by singing “Blue Moon” and “Surabaya Johnny.”

Jennifer Westfeldt conveys the daughter’s wounded psyche with her characteristic offbeat comic sensibilities that make her angry outbursts even more effective. As the patrician neighbor whose favorite movie is A Passage To India, Richard Bekins is a marvel of upper crust courtliness masking eruptive rage. Matt Dellapina brings the right amount of frantic energy to the role of the reluctant show business pawn that is Audrey’s chief foil. Ken Barnett moodily offers a sharp portrait of middle-age angst as the burnt-out corporate husband seeking fulfillment. Matt Dickson enacts the typically disaffected loopy young man with winning charm and depth. 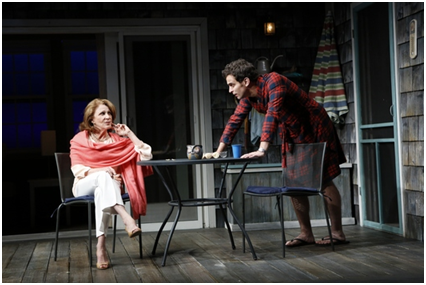 Linda Lavin and Matt Dellapina in a scene from Too Much Sun (Photo credit: Carol Rosegg)

Director Mark Brokaw superbly modulates the excessive comic and dramatic tones and narrative upheavals with visual and emotional cohesion. His imprint makes the production feel like a seamless journey of discovery.

The unison of remarkable writing, grand performances, and assured direction make Too Much Sun a highly outstanding play.