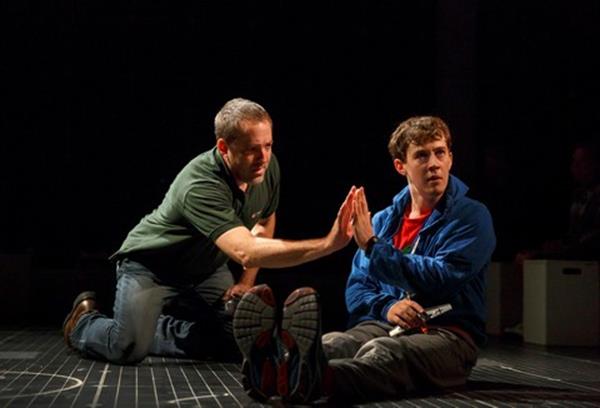 Ian Barford and Alex Sharp in a scene from “The Incident of the Dog in the Night-Time” (Photo credit: Joan Marcus)

After reading Mark Haddon’s best-selling first-person narrative, “The Curious Incident of the Dog in the Night-Time,” you would be likely to say that this story is impossible to stage as a play. However, you would be totally wrong. The National Theatre of Great Britain’s production now on Broadway with an inventive script by Simon Stephens and brilliant video design by Finn Ross, enhanced by Paule Constable’s lighting, is a magical, engrossing, unforgettable work. Alex Sharp who graduated from The Juilliard School this past May makes an astonishing Broadway debut as the 15-year-old autistic boy Christopher Boone who in trying to solve a mystery expands his horizons and ultimately his world. Marianne Elliott, an Associate of the National Theatre, who previously co-directed the remarkable “War Horse,” has done it again with this mesmerizing play.

The prolific playwright Stephens was introduced to New York with the Atlantic Theater Company production of “Harper Regan” in 2012 while MCC Theater will begin previews for the NY premiere of his “Punk Rock” on October 29 of this year. In adapting “The Curious Incident of the Dog in the Night-Time,” Stephens has cleverly solved the problem of the first-person narration by having Christopher’s special needs teacher Siobhan read Christopher’s diary out loud as though marking a school assignment, while at other times Christopher and additional characters narrate from the diary. All of these devices help keep us inside of Christopher’s head which was one of the book’s great strengths. In addition, designer Bunny Christie’s unit set looks as if the stage is made up of graph paper (which is used in various ways) helping to create the world that Christopher lives in.

The play begins, when one night after midnight, 15-year-old Christopher discovers the neighbor’s dog Wellington dead with a pitchfork in its side. Arrested for attacking the policeman who comes to investigate, Christopher decides to solve the mystery of who killed the dog even though his father forbids him to play detective. In any case, this will be a stretch for Christopher who is suffering from Asperger’s syndrome: he can’t bear to be touched, cannot make eye contact, hates the color yellow, is a whiz at math, won’t talk to strangers, and can obsess over a computer game for hours. He also takes everything literally and does not show his emotions, making social interactions difficult. In the course of his adventures, Christopher (who lives with his understanding but volatile single father) decides to find out what happened to his mother. This adventure takes him to London, his first ride on British rails and later the London Underground, all of which he finds frightening, confusing and scary. 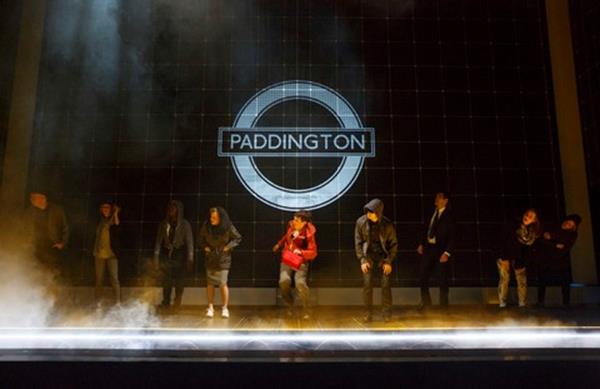 Alex Sharp (center in red) and Company in a scene from “The Curious Incident of the Dog in the Night-Time” (Photo credit: Joan Marcus)

Except for Sharp as Christopher, all of the other actors play more than one role, and remain on stage most of the time as observers. Part of the fun is recognizing the actors in different roles, some similar and some antithetical to their other appearances. However, the dazzling part of the play is the visual aspect. As Christopher is bombarded with signs or numbers we are too. How the stage is turned into first the Swindon railroad station, then the train, and later the London underground using the small elements that have been on stage all the time is truly remarkable. Each act ends with a breathtaking coup de theatre that would be a shame to give away.

As the autistic 15-year-old, Sharp is totally convincing, speaking in the flat tone of voice typical of people with Asperger’s but allowing us to see the swirling emotions just below the surface. And although Sharp is a college graduate, as an actor he has no trouble playing a teenager who is antisocial and frightened by most things in his everyday world. Aside from the four-person ensemble, all of the other ten actors make memorable characters out of their many roles. Francesca Faridany’s special needs teacher is always compassionate and attuned to Christopher’s particular difficulties. As his father Ed, Ian Barford is a man repressing his emotions that are about to boil over at any moment.

Playing Christopher’s mother in both the flashbacks and later scenes, Enid Graham makes us feel her frustration living with an autistic young man while she has unfulfilled needs of her own. Helen Carey is charming as the older neighbor who tries to become friends with our young hero. Jocelyn Bioh is amusing as a series of young women that Christopher meets who are sure that he is putting them on by pretending to misunderstand seemingly simple things. David Manis is fine as several older male authority figures. Mercedes Herrero demonstrates her versatility from the angry neighbor to the supercilious headmistress to the peremptory shopkeeper. The continual movement of the characters is the outstanding work of choreographers Scott Graham & Steven Hoggett for Frantic Assembly.

“The Curious Incident of the Dog in the Night-Time” is the sort of very special play that only comes along once in a very great while. It is a play that will not only astonish you while you are in the theater but will also stay with you for a long time after you have left. In addition, you will come away with a much greater understanding of people with autism and how their minds work.

“The Curious Incident of the Dog in the Night-Time” (through September 4, 2016)

Running time: two hours and 25 minutes including one intermission plus an after-curtain coda