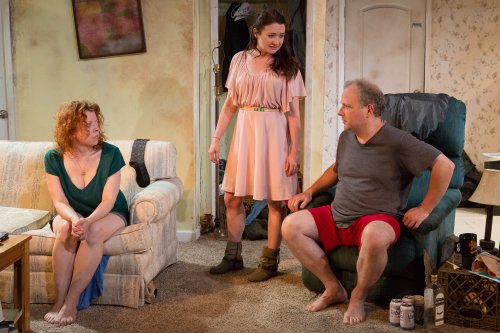 Probably because I peed in it.

We slap each other.

These are among the choice zingers in playwright Anne Adams’ emotionally raw, earthy and often very funny contemporary dysfunctional Texas-set, family drama Strange Country.  This entertaining piece of Americana has the humanity of Lanford Wilson, the quirkiness of Beth Henley and the unruliness of Sam Shepard.

When the audience arrives they are greeted by the atmospheric sight of scenic designer Brian Dudkiewicz’s finely realized rundown living room and kitchenette set that’s strewn with beer cans and pizza boxes. 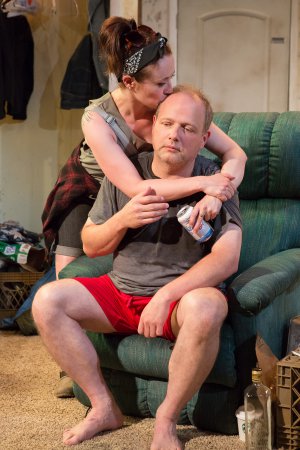 There is also the sight of Darryl, a doughy man in his late thirties, wearing gym shorts and a T-shirt, passed out on a recliner.  Eventually he wakes and indeed urinates in the kitchen sink before passing out on the couch.  He is mentally unstable divorcé with a 10 year-old son he hasn’t seen in seven years and who is supported by his parents.

His stupor is broken by the arrival of his younger gay sister Tiffany, who is a Starbucks barista and her demure, recovering alcoholic, former social worker girlfriend Jamie.  It’s July 3rd and the domineering Tiffany is charged with getting the disaffected and cantankerous Darryl ready to attend their parent’s recommitment ceremony that takes place the next day.

In 90 well–crafted minutes divided into three scenes, Ms. Adams affectionately renders her trio of interconnected lost souls’ plights with biting humor, and intense revelations with a number of plot twists.  Everything leads to a moving, realistic and satisfying conclusion.

As Darryl, the powerhouse Sidney Williams delivers a hilarious and moving performance that vividly conveys the character’s melancholy, humor and optimism.  With his wry, engaging and animated presence Mr. Williams lands every joke and mines all of the emotional fluctuations in the play.

Vanessa Vache’s forceful and charming characterization conveys the feistiness and sorrowfulness of the spirited Tiffany.  It’s a wonderful portrait of a family’s lynchpin struggling to not to unravel. 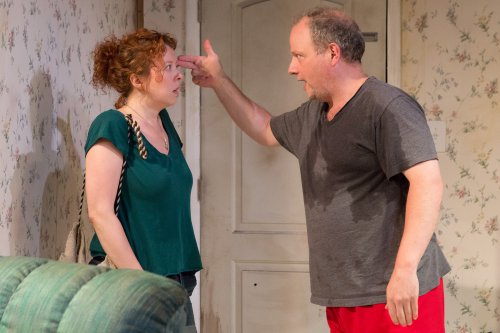 Jamie’s romantic contradictions and complicated life is finely realized by Bethany Geraghty’s subtle and focused performance.  As the catalyst of the trio, Ms. Geraghty perfectly veers from being withdrawn to explosiveness with engaging ease.

Director Jay Stull has inventively staged this one-set play by placing the actors in a variety of areas, rescuing it from becoming static.  Mr. Stull’s work with the actors leads to several dynamic clashes.

Michael O’Connor’s expert lighting design is particularly striking during the sequence wet during the middle of the night with its use of shadows and darkness.  Sound designer Andy Evan Cohen skillfully blends outside sound effects giving the sense of the outside world and punctuates the scenes with bursts of music.  America’s classic song, “A Horse with No Name,” is the cell phone ringtone of one of the character’s and is evocatively used.

Though not in the league of such epic family explorations as August: Osage County, Strange Country is quite accomplished on its small-scale.