Computer technology and the Internet are given the once over in this engrossing and interactive cautionary play starring Daniel Radcliffe. Created by British playwright James Graham and director Josie Rourke, Privacy, this interactive evening in the theater, may just be the most technologically advanced stage play so far. The play which premiered in London in 2014 at the Donmar Warehouse where Rourke is artistic director has been revised for American audiences as well as updated in order to stay current. The play also includes audience participation that means every performance will be different.

Audience members are encouraged to charge their smart phones and leave them ON during the performance where they are asked to Google various Internet sites or take selfies that they then send to Onstage Digital Researcher Harry Davies. There are even smart phone charging stations at various places in and around the theater so that audience members can be sure to use their phone in the course of the evening. The Information provided when purchasing tickets may be used to inform some moments of the performance, but audience members can opt-out of this process. The very serious message of the play is that in the Information Age there is no privacy!

Radcliffe, returning to the New York stage for the fourth time and his first time at the Public Theater, plays The Writer, a reclusive and withdrawn young Britisher who is suffering from a traumatic break-up with his ex. He visits a psychotherapist (played by Reg Rogers) for the first time in order find out how to get on with life and is advised to use the Internet to meet new people. He then moves to New York where his ex now lives as he thinks dating is easier here. 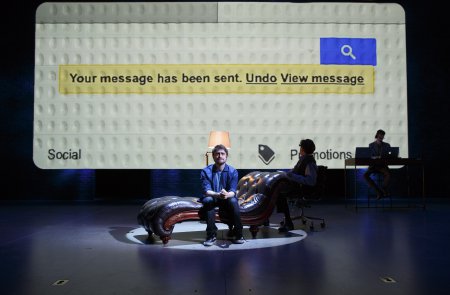 In the course of the evening, The Writer encounters 22 famous high profile technologists, professors, writers, journalists, politicians and sociologists who apprise him of how internet services, corporations and governments are gathering information on us all the time. The versatile and amusing ensemble of five which also includes Rachel Dratch, Michael Countryman, Raffi Barsoumian and De’Adre Aziza as well as Rogers impersonate these public figures whose names are not listed in the program to keep their appearances a surprise but whose appellations and job descriptions are projected as Post-it notes on the huge screen that backs the set. Their stage pronouncements are a combination of interviews they have given the playwright and their published writings, as well as dialogue created by Graham. Inspired by the revelations of Edward Snowdon of WikiLeaks, the play ultimately has him put in an appearance via a video clip.

While the names of playwright James Graham and director Josie Rourke may not immediately ring any bells, he is the author of Broadway’s Finding Neverland and she will be recreating her Donmar Warehouse production of Les Liaisons Dangereuses on Broadway this fall. Ironically, Finding Neverland is the least characteristic of Graham’s 15 plays as they are usually cutting edge and very political – more like Privacy. Since Privacy opened in London in 2014, Graham and Rourke have also created The Vote, a play which was set on the eve of the British general election of May 7, 2015 and which was then televised live on the last night of its run as the polls were closing. 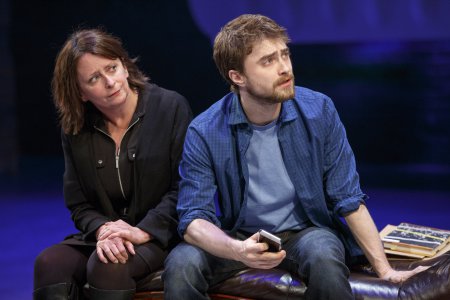 Rachel Dratch and Daniel Radcliffe in a scene from “Privacy” now at the Public Theater (Photo credit: Joan Marcus)

Playing his most mature role to date, Radcliffe, late of Harry Potter, is charming as he begins as an introverted, reticent Englishman and then slowly panics as he realizes the extent to which his obsession with the Internet has left him vulnerable to outside forces. He is particularly fine in the computer dating sequence in which he must do a great deal of quick thinking and ad libbing as the participants change nightly. The mainly British production team includes set designer Lucy Osborne who has created a witty New York apartment for The Writer made up almost entirely of boxes made to look like iconic skyscrapers, and the clever projection design of Duncan McLean.

Privacy is entertaining, educational – and frightening. You probably were aware of the information gathering on the Internet and smart phones but you have never seen it demonstrated to this extent. You will learn about everything from hyperlinks to metadata. The use of information gathered from the audience causes a great deal of laughter but by the end it is no laughing matter: identity theft and other criminal uses are fully explored. At the end of the evening, you may be inspired to never want to use your smart phone again; you will definitely be moved to obtain greater security for your laptop and PC.

The Public Theater and The Donmar Warehouse