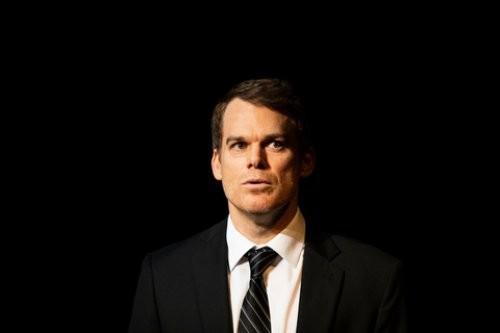 Michael C. Hall lately seems to be specializing in smoothing off the rough edges of bawdy, avant-garde theater pieces.  His recent portrayal of Hedwig in Hedwig and the Angry Inch (Stephen Trask/John Cameron Mitchell) turned the burnt-out, angry character into something out of Kinky Boots.

Similarly, in his portrayal of the title character in Will Eno’s Thom Pain (based on nothing), he becomes the nice-looking, slightly disturbed someone spouting off while sitting next to you on a Central Park bench rather than the troubled, dark, jittery person to be avoided at any cost (unless, of course, you’ve paid good money to sit in a theater for seventy minutes and hear him rant and rave).

Hall is not helped by an overzealous production that, for some reason, turns the Signature’s Irene Diamond Stage into a construction site, complete with drop cloths, ceiling netting and lots of ladders ringing the stage—an odd, misleading choice by set designer Amy Rubin. Jen Schriever’s lighting manages to make this set mysterious. Schriever is also tasked with following Hall/Pain in his travels into the auditorium, using houselights along with stage lights with great skill. 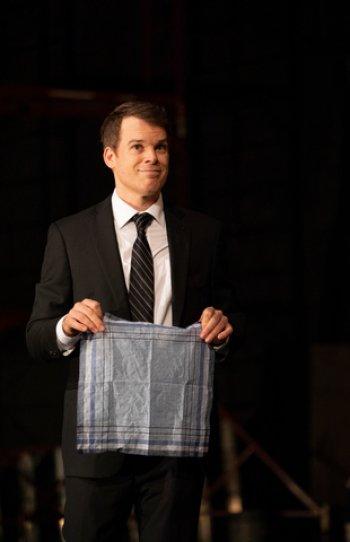 It’s not kosher—and unfair—I know, to compare interpretations of plays by different actors, but the original Thom Pain, James Urbaniak put his indelible mark on the character, catching the bizarre, angry tone that is the subtext of the play.  Urbaniak encouraged crossing the street to avoid him while Hall almost urges you to take him to Starbucks for a heart-to-heart.  (Eno appears to have approved both interpretations or there probably wouldn’t be a Michael C. Hall staging.)

Hall is a fine actor who keeps the audience fascinated, but he turns the play into a standup routine, purposely, rather than inadvertently, joking with the audience members and reacting to their laughter, even after lines that merit only shocked titters.   Every interpretation is valid, but why spend an hour-plus with a pleasant, slightly irritating person when you could just as easily be moved, shocked and titillated by a borderline lunatic (knowing full well that the relationship would last only a finite period).  Which is the better theatrical experience?

Thom Pain (based on nothing) begins in total darkness.  Pain illuminates himself with a cigarette lighter, several times, joking about giving up smoking, segueing into a story about a little boy standing barefoot in a puddle, writing with a stick that becomes a violin bow. This boy eventually lies down with a dog, drawing pictures on his own tummy and wets his bed, and so on:  non sequitur following non sequitur, interrupted by wisecracks. 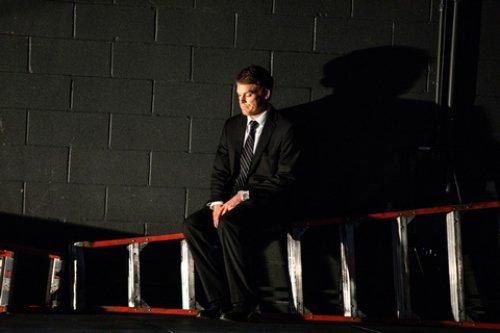 He muses on a hypothetical, painful childhood and even greets latecomers in a moment allowed in the script, despite the appearance of spontaneity.  This spirit of planned improvisation fills a great deal of the play, including venturing into the audience, persuading an unsuspecting audience member to climb onto the stage and stand twiddling his thumbs while Pain ignores him, all the while casually musing on life, love and mathematical probabilities, barely hiding those autobiographical sounding psychic wounds.  That he jokes about his hurts should make him nervously vulnerable, but not in this case.

Are we to believe this rambling, nice-looking man?  Is he high on something and unable to reveal his truth?  Eno leaves this up to the audience.  Even the title is Eno’s joke:  Pain dances around ancient wounds (“pain”) and goes on and on without making sense (“nothing”).  After wandering through all these tales—including stories about a woman—his last line is the ironic “Isn’t it great to be alive?”

Oliver Butler, the director, gives Hall great leeway, making for a relaxed atmosphere, rather than a pacing-in-a-prison-of-his-own-making presentation.