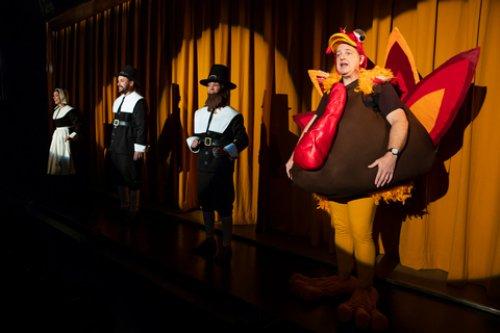 Many comic artists have noted that great humor often comes from great tragedy, though, inevitably, sometimes the latter overwhelms the former, and all you’re left with is a lot of indignation and nobody laughing. As the late Joan Rivers once remarked, “comedy is anger, but anger is not comedy.” It’s a maxim that the Sicangu Lakota writer Larissa FastHorse takes to heart in The Thanksgiving Play, as she manages to keep us smiling while four white characters attempt to turn a half-millenium of genocide into a 45-minute children’s show.

Logan (Jennifer Bareilles), a high school drama teacher, uncompromising vegan, frustrated improv director, and prolific securer of grant money, is the primary force behind this misbegotten passion project, which, in celebration of Native American Heritage Month, she imagines as a “revolutionary,” and wholly devised, statement against the stereotypes and myths of the Thanksgiving holiday. She also hopes it will help thwart a parents’ petition to fire her. Although FastHorse suggests that the campaign is linked to a particularly inadvisable production of The Iceman Cometh, it’s not difficult to understand how Logan’s more-woke-than-thou histrionics could rub anyone the wrong way, especially when she can so easily be convinced that the use of red face might be okay if it were “meta.”

Abetting Logan’s vilely reductive approach to Native American history is Jaxton (Greg Keller), a self-described “actor slash yoga dude” who Logan refuses to call her boyfriend, apparently for gender equity reasons rather than the much more salient problem that he’s an idiot. A couple of small fish in a small pond, they both have lots of politically correct thoughts about what’s wrong with the world, even though neither of them has seen very much of it. In essence they’ve created a two-person bubble and filled it with all of their ill-informed hyper-sensitivities, which they can either abandon or use to judge anyone they deem less informed. Put another way, they’re insufferable. 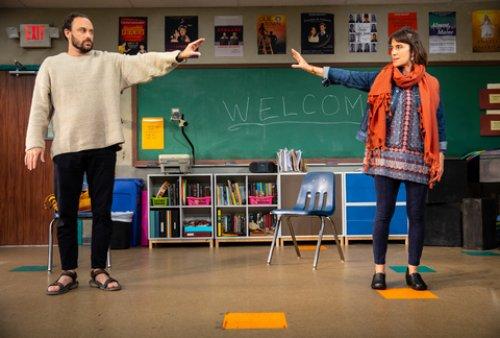 Greg Keller and Jennifer Bareilles in a scene from “The Thanksgiving Play” (Photo credit: Joan Marcus)

Thematically, Logan and Jaxton are all-purpose punching bags, allowing FastHorse to satirize a bounty of worthwhile targets: the American educational system; condescending liberal do-gooders who never do anything liberal or good; actors slash yoga dudes; and, most bitingly, a theater community that has largely ignored Native Americans on its stages. In this last regard, Logan’s own negating solution to the complexity of depicting any of the numerous Thanksgiving stories (yep, there are more than one) is particularly damning for its believability.

Unfortunately, for a few long and aggravating stretches of the play, which takes place on Wilson Chin’s perfectly rendered classroom set, Logan and Jaxton are just allowed to exchange inane beliefs without anyone around to tell them to shut the hell up. In a sense, I suppose, my twitching left eye was the fault of Bareilles and Keller for acting their mostly one-note roles so well. Though, to be fair, they do summon at least a little sympathy for a couple of extremely marginal theater artists who will obviously never receive the respect they so desperately crave.

The Thanksgiving Play works much better when someone else is onstage to distract from Logan and Jaxton’s obnoxiousness, if not actually temper it. Enter Caden (Jeffrey Bean) and Alicia (Margo Seibert), two characters on oppositie ends of the cerebral spectrum. Caden, an elementary school history teacher with playwriting aspirations, has sweet-natured illusions about how much truth an audience is willing to endure, while Alicia, a bubble-headed actress from Los Angeles, is not constitutionally inclined to ever wonder about such things. 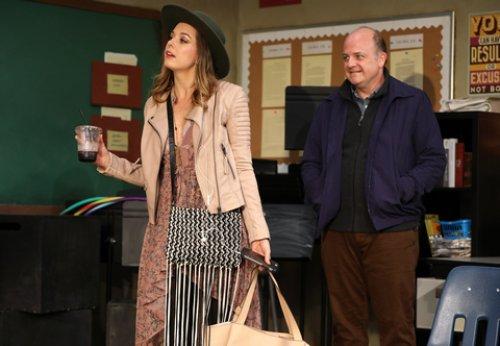 Margo Seibert and Jeffrey Bean in a scene from “The Thanksgiving Play” (Photo credit: Joan Marcus)

Despite sounding every bit as cookie-cutter as Logan and Jaxton, FastHorse invests Caden and Alicia with more depth than their all-too-familiar character types would seem to allow. The simple but not simple-minded Alicia, in particular, requires far more thought than you might initially consider necessary, especially when she starts to seem like the antidote to Logan and Jaxton’s mounting cultural hypocrisies, not because she’s a decent person, but, rather, because she’s so incredibly honest about her lack of empathy, knowledge, and concern for anything unconnected to her career ambitions. It’s like she’s reached an enlightened state of self-centeredness, which Seibert turns into some of the play’s funniest moments.

Breaking up the action are a bunch of children’s skits, a few of them taken directly from the Pinterest boards of real teachers. FastHorse advises that actual kids could fill the roles in these supposed historical lessons, though director Moritz von Stuelpnagel instead chooses to have his actors don the pilgrim hats, Native American headdresses, and gigantic turkey outfit (Bean is a really good sport) that costume designer Tilly Grimes has stitched together with elementary care. As for Grimes’s quartet of headless turkey puppets, they deserve to become a holiday staple.

Comedically, von Stuelpnagel has picked the better casting option, since the skits, which vacillate between well-meaning stupidity and outright offensiveness, would only elicit cringes coming out of the mouths of children. Then again, sometimes embarrassment is good for the soul.

The Thanksgiving Play (extended through December 2, 2018)