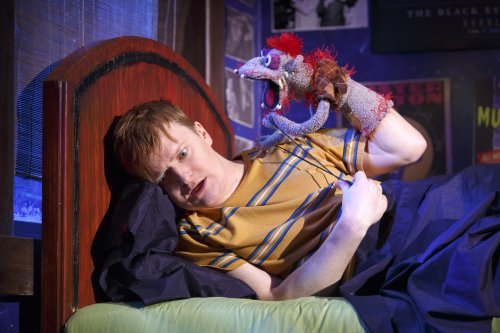 Steven Boyer in a scene from “Hand to God” (Photo credit: Joan Marcus)

Since the birth of Christianity (and certainly before), purportedly good people have been doing bad things and blaming their behavior on the devil. Ever since the ancient serpent enticed Eve to eat the apple in the Garden of Eden, the vaguely dangerous, mysteriously powerful leader of the underworld has taken the fall for many human misdeeds. Hand to God, playwright Robert Askins’ new work currently playing at the Booth Theater on Broadway, offers a fresh, brilliant addition to this longstanding tradition of transgression and absolution. The play is a riotous, profane, graphic, and ultimately poignant story of puppet possession.

Hand to God checks in on a Texas town shortly after one of its citizens has died of a heart attack. As a coping mechanism, the man’s widow Margery turns to the local church for sanctuary and teaches a Christian puppet class, instructing her teenage students on how to make and use hand puppets for worship. Jason, the man’s son, likewise uses the puppet class as a mitigating strategy; forging a bizarre friendship with his sock companion Tyrone, he refuses to so much as remove his puppet from his hand. As Tyrone proceeds to harass women, vandalize property, swear a blue streak, and even hurt people, the townsfolk decide that the puppet is possessed and make inept attempts a exorcizing the demon.

Though operating under the guise of a rather nonsensical comedy, Askins’ play is actually a sophisticated examination of how we handle grief. The text depicts two competing sides of a boy newly without a father and in the throes of puberty: while Jason appears too innocent to ever do anything wrong, the sock on his hand offers a convenient outlet for his bad behavior. Laced in this dichotomy are hints of schizophrenia, allusions to autoerotic stimulation, and a critique of the Christian notion that “unholy” behavior exists outside of the pure self and thus can be forgiven and eliminated. The question literally “at hand” is as follows: is the puppet actually possessed or is Jason mentally ill? If the latter, to what extent should the otherwise sweet boy be held responsible for the evil puppet’s actions? 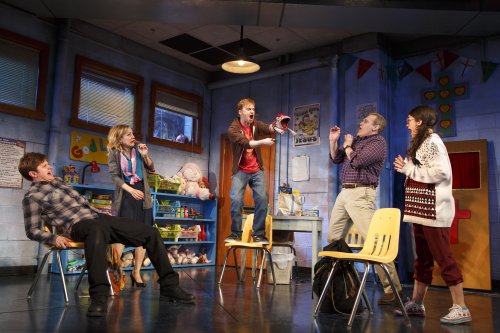 Perhaps even more importantly, Hand to God takes an illuminating look at how we react to the grief of others. Despite Jason’s heinous and dangerous antics with the demon puppet, his reputation as a good person suffers little to no damage. Conversely, Margery’s fragile emotional state prompts her to engage in some transgressive behavior of her own, and she is met with nothing but hostility by the same Christians offering her son compassion. Perhaps this is because she wears no puppet to shoulder the blame, or perhaps this is because the townsfolk are simply predisposed to treat her differently. How do factors like age and gender influence our treatment of other people’s coping mechanisms? Furthermore, should these factors make a difference?

Despite the heavy themes and explicit content, the production itself is a devilishly good time. Moritz von Stuelpnagel’s frank direction is simultaneously too violent to watch with both eyes open and too compelling to miss a single beat. Von Stuelpnagel proves to be a master of comedy and drama, fusing the two together for an evening of laughs and gasps. Likewise, Jason Lyons’ lighting design and Beowulf Boritt’s scenic design work together to subtly provide the piece with whimsical and demonic tones: they turn the church’s daycare room into Satan’s lair with nothing more than the flip of a light switch and the addition of some spray paint.

Traipsing around this well-dressed set is an eminently deserving cast of actors. In what may prove to be a career defining performance, Steven Boyer leads the charge as Jason and his devil hand puppet Tyrone. Switching back and forth between the adolescent’s modest, mellow voice and his sock’s gruff, brash growl, Boyer creates two distinct characters equally worthy of critical acclaim. Additionally, Geneva Carr plays the widowed mother Margery with an expert balance of tenacity and exasperation. Giving similarly excellent performances in the remaining supporting roles are Michael Oberholtzer as the bully Timothy, Sarah Stiles as Jason’s love interest Jessica, and Marc Kudisch as Pastor Greg.

“The devil made me do it” may not hold up as a valid excuse like it did in millennia past. Nevertheless, Robert Askins and his team prove that the notion of possession is still excellent fodder for compelling drama and a unique way to examine the various aspects of a single human’s personality. People are not entire good or evil, right or wrong; however, they are always be responsible for their actions.