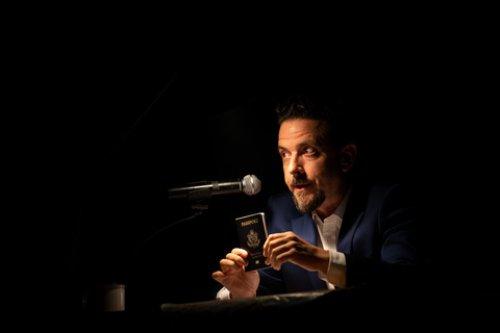 Thaddeus Phillips’ 17 Border Crossings is about just that: 17 encounters the author had travelling from one exotic country to another.  The adventures, humorous and otherwise, overlap with breakneck speed until the show slows down to offer a dark vision of our current complex border morass.

On a misleadingly bare stage sits a table, desk lamps, a chair, a blue suitcase and some visible strips of theatrical lighting.  Phillips, who is billed as The Passenger, appears and begins a picaresque tale of his wanderings opening with a mini-lecture on the origins of the passport back in Henry V’s time.

His first related trip is by train from Prague to Serbia in 1998, the highlight of which is watching a mysterious fellow traveler smuggle a number of suitcases into Serbia and, with a wink, pull our hero into his illegal act. 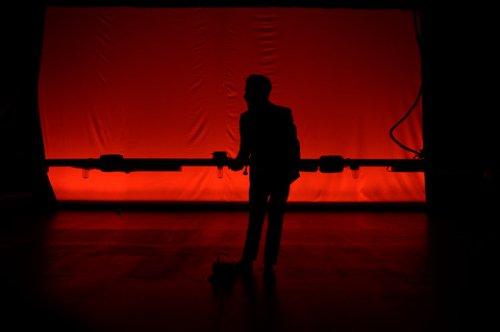 Going from Israel, whose border agents he calls the most beautiful in the world, to Jordan is a hoot as he runs the gauntlet of dimwitted, bribe-demanding Jordanian officials.

A mean-spirited customs official in Cuba makes sure Phillips’ passport is covered with obvious Cuban visa stamps despite the Passenger’s protestations.  In Colombia he rides shotgun in a wonky bicycle taxi en route to a large fund-raising event in a rural area near the Venezuelan border.  Returning from Bogatá, he is held by American customs agents for several scary hours while they investigate spurious suspicions of drug trafficking.

He becomes a “dental refugee” in Ciudad Juárez where he meets Pablo who was kicked out of the U.S. and yearns to return to his family.  This leads to a long reverie about the meaning of borders ending with a bittersweet image that, although it comes out of nowhere, somehow gives depth to an otherwise giddy tale. 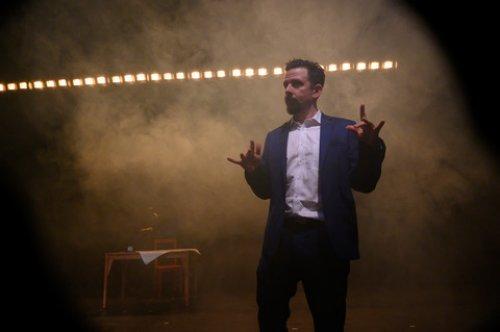 Tatiana Mallarino (Phillips’ wife) has directed with a firm hand and a fine sense of timing.   The tales that come hot on each others’ heels, often overlapping, are clearly delineated and, despite having to run from one side of the stage to the other, Phillips always seems relaxed and eager to tell the next episode.

17 Border Crossings is one of the most technically adroit Off-Broadway shows to be seen thanks to the split second cooperation between Phillips’ spare scenery design, David Todaro’s brilliantly inventive lighting and Robert Kaplowitz’ sound design and occasional music.  How Phillips uses the table alone is astonishing, literally creating multiple angles of observation, including an astonishing simulation of peering at the Passenger from up above.

Unanswered in the play is why Phillips did all this travelling.  Was he doing research?  Is he a curious citizen of the world? Or is he on some unnamed or unnamable business?  This lack of specificity turns the play into a well-performed travelogue, albeit with insights into the panoply of humanity he meets on his trip. 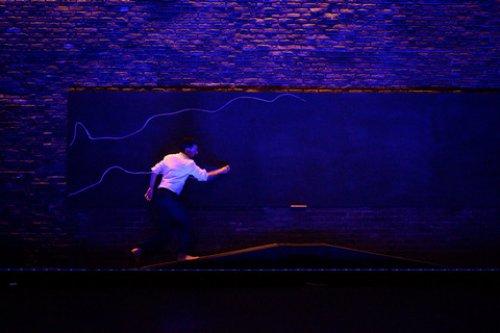 Phillips is not a flamboyant performer yet his technical ease, particularly linguistically—sounding fluent in several languages—helps give the loosely structured show an amusing flow.

17 Border Crossings doesn’t quite achieve great depth, despite its heartbreaking ending, but it is entertaining and impeccably staged.