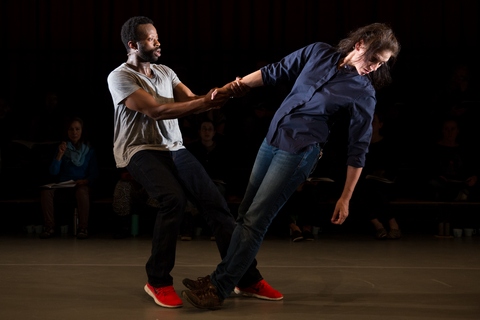 New York Theatre Workshop is hosting Britain’s Actors Touring Company production of Scottish playwright David Greig’s acclaimed Edinburgh Festival Fringe hit, The Events. With the London cast again directed by Ramin Gray, artistic director of ATC, this play inspired by the horrendous massacre in Norway by a lone gunman in 2011, is a powerful drama of communal grief after a mass shooting compellingly depicting the catharsis reached by its leading character, a female Scottish vicar. Unfortunately, where this unusual play falls short is that the audience, while cerebrally involved, does not also undergo a similar catharsis. Among the novel techniques of the production is the use of a different choir at each performance and the use of that choir to play members of the community.

If the name David Greig is not familiar, he is one of Scotland’s leading playwrights since the early 1990’s. However, his only New York productions till now have been limited engagements: The American Pilot at Manhattan Theatre Club in 2006, London’s Donmar Warehouse production of his translation of Strindberg’s The Creditors at Brooklyn Academy of Music and London’s Tricycle Theatre production of The Great Game: Afghanistan (a collaboration by 12 playwrights) both in 2010, and Edinburgh’s Traverse Theatre Company production of Midsummer which appeared at Theater Row’s Clurman Theatre in 2013. Many of his plays are highly political and critical of the status quo. Even his relationship dramas are ‘state of the nation’ explorations.

Claire (Neve McIntosh) has been both a witness and a survivor of an unnamed mass shooting. As the local vicar, she uses her multicultural choir for communal healing. However, she is going through all the stages of grief: unable to sleep or eat, angry, questioning, acting out, trying out ancient rituals as a way of reclaiming the souls of the bereaved, etc. Her partner Catriona, a psychologist, attempts to clarify how the killer will be seen by psychiatry but his state of sanity or madness is too simplistic an explanation for Claire. In order to find answers, she interviews the killer’s divorced father, his school classmate who was also unpopular, the journalist who had written a book on “the decadence of contemporary society,” and a reactionary politician who did not believe in foreigners in their country and to whose party the killer had recently joined. However, in her grief Claire pushes everyone around her too far: she loses her choir and may or not have lost her partner who wants her to get some professional help. 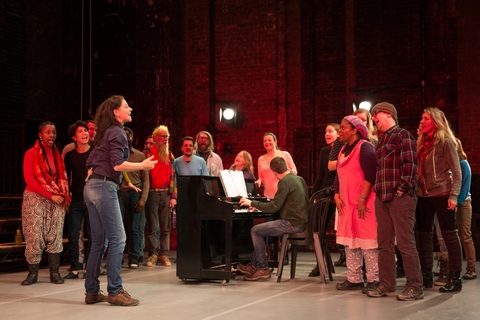 Neve McIntosh and choir in a scene from David Greig’s “The Events” (Photo credit: Matthew Murphy)

The staging of this story is quite unusual and spellbinding. All of the major parts other than Claire are played by a character simply called “The Boy” (Clifford Samuel) who plays the killer, Claire’s partner and all of the people that she interviews to try to get to the bottom of the events. The choir is used both to sing songs such as the hymn, “How Great Thou Art,” as well as the killer’s favorite pop song, “Bonkers” by Dizzee Rascal, and also to read parts as members of the community to question the killer. Claire’s recounting (or reliving) of her experience takes place between rehearsals with the choir who remain on stage through most of this short play on Chloe Lamford’s set that resembles a church vestry. The play begins as it ends: have we reached another day or is Claire reliving her experiences once again in a never-ending cycle?

The play is not entirely success in its obvious goal. The device of using the character of “The Boy” to play all of the other characters works only to a certain extent. Is the author suggesting that we all play every role or that we are all share a common guilt in a national tragedy? On the other hand, no matter how fine an actor one hires, it is a bit confusing to have all the characters other than the protagonist played by one person. Or is this modeled on ancient Greek theater which originally used only two actors -who changed character by changing masks. The actual (off stage) “events” referred to are never entirely described although pieces of what happened are scattered throughout the play. This makes the play challenging for the audience, even regular theatergoers. While the actual choirs may be expert singers, they are only rehearsed in their acting roles for the single performance. And most critical is that while we are impressed and intellectually engaged by the play and its depth of analysis into an unimaginable horror, by not knowing what happened, we are left out of the experience so that we do not have the same catharsis as the protagonist.

Neve McIntosh has the difficult role of Claire and is on stage throughout. While her Claire never loses her temper or breaks down, we gather the depth of her suffering from the extent of her search to find answers. Clifford Samuel demonstrates versatility playing a multitude of characters from victims to perpetrators to bystanders. Magnus Gilljam is the onstage pianist who occasionally enters the action. Charles Balfour’s lighting is often brought up to full brightness, reminding us we are at a theatrical performance and like Brecht’s alienation effect, it continually breaks the mood that has been established. The original music for songs that define various points of view is by composer John Browne who has written the operas based on the film Babette’s Feast, the novel Midnight’s Children and the legend The Pied Piper.

As directed by Actors Touring Company’s Ramin Gray, David Greig’s The Events is a memorable theatrical experience. It misses true greatness by not offering its audience the same release and purification that its protagonist undergoes.