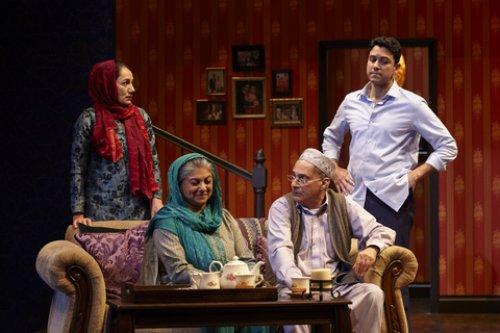 An Ordinary Muslim is Hammaad Chaudry’s first play and he is fortunate that the New York Theatre Workshop has given him a first rate production under the direction of the estimable Jo Bonney.

The trouble is that there is nothing new or daring or particularly interesting about the play despite its intriguing subject matter.  It is an old-fashioned play—think warmed over Clifford Odets with a touch of Chekhov and more than a few hints of Greek hubris—that deals with the treatment of Pakistani-British Muslims in Great Britain, specifically West London, 2011.  It is full of clichéd writing including having characters appear just as their name is brought up.

Azeem Bhatti (Sanjit De Silva), about whom Muslim revolves, sits with his married sister Javeria (a steady, standout Angel Desai) who is visiting the Bhatti household to deal with their father’s violence towards their mother.  Quickly, Chaudry fills in details of Muslim domesticity:  husbands will be violent and will be forgiven; female children are lesser than their male siblings; religion will solve all problems. 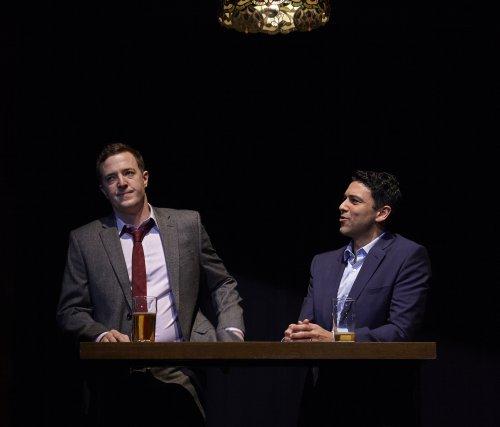 A living illustration is the mother Malika (Rita Wolf, taking the character’s complications in her stride).  She refuses to admit that her husband Akeel (Ranjit Chowdhry, quietly intense) abused her, exacerbating her heart condition.

Azeem is up for a promotion at his bank and needs the help of his Caucasian friend, David (a solid Andrew Hovelson) to put in a good word, but Azeem’s preconceptions and his own anti-white bias doom his chances leading to the emotional breakdown of his family, tediously examined by Chaudry.   Azeem who isn’t even a practicing Muslim—who, in fact rebuffs all efforts to rejoin the fold—wears his religion/ethnicity like a shield behind which he hides to avoid the real issue—his blinding, delusional pride.

Azeem’s wife, Saima (a lovely, passionate Purva Bedi) begins to lose faith in her husband while she re-strengthens her commitment to Islam.  She is also drawn to a young Hamza (a sweetly passionate Sathya Sridharan). 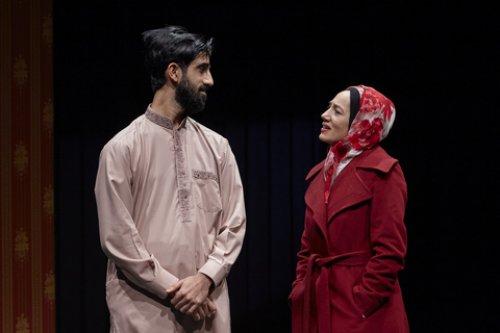 Sathya Sridharan and Purva Bedi in a scene from “An Ordinary Muslim” (Photo credit: Suzi Sadler)

The ending of the play is totally illogical and further displays Azeem’s character weaknesses.  De Silva takes Azeem’s complications in his stride, but is never quite convincing that Azeem is anything but a spoiled brat, self-centered and self-deluded.

Neil Patel’s clunky set does the play no favors, irritatingly splitting apart and reassembling.  To be fair, the set piece for the Bhatti home, when it remained still, did evoke the culture of the family with its colorful wallpaper and furniture.  Susan Hilferty’s costumes are perfect, whether the stiff suit of David or the head scarves and comfortably removable shoes of the family.

Lighting designer Lap Chi Chu’s lighting does the best it can considering the challenges of the set (which also included an unnecessary second story).

What might have been a brilliant dissection of a troublesome social problem becomes instead the study of a spoiled young hypocritical man who could not take responsibility for the harm he has done to his wife, his family, his friends and to the business community with which he refused to cooperate.