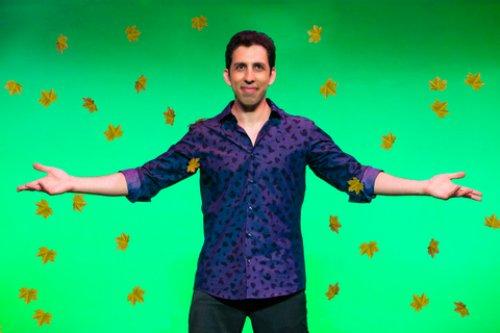 Vitaly Beckman in a “Vitaly: An Evening of Wonder” (Photo credit: Jeremy Daniel)

“We’re all going to speak the same language, the language of wonder,” proclaims illusionist Vitaly Beckman at the start of his entertaining show, Vitaly: An Evening of Wonders. The opening is an entrancing bit with a floating apple.

The youthful, athletic, beaming and unconventionally handsome Mr. Beckman holds forth for 75 delightful minutes with his slight native Russian accent. Though there’s not a big wow factor on display there’s enough cool sequences to make the production quite enjoyable for both adults and children.

The audience is frequently called upon to participate onstage and from their seats with one elaborate portion involving their driver’s licenses. London vacation photos of Mr. Beckman, a guard at Buckingham Palace, and Queen Elizabeth II becomes a hilarious and mystifying routine. Plastic bottles are fodder for visual conjuring. While blindfolded Beckman guesses things that audience members have selected. A Van Gogh-inspired painting exercise is performed to the booming sound of Beethoven. Less successful is a large-scale, convoluted and confusing card trick.

Much of the material uses video projection of the objects onto a large screen so that details are visible up close. Scenic designer John Rios has it surrounded by striking colorful embellishments with a nature theme. Stephen Bulat’s varying lighting design perfectly realizes the drama and creates scope. Appealing and black-clad stage manager Aimee-Marie Holland pops in and out to assist in the machinations. 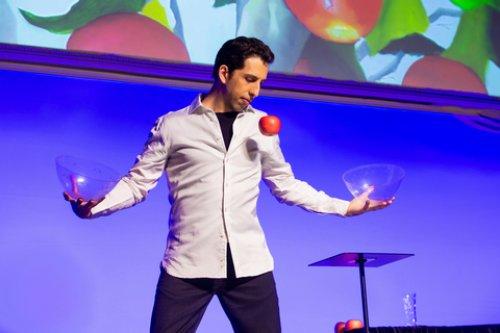 Vitaly Beckman in a “Vitaly: An Evening of Wonder” (Photo credit: Jeremy Daniel)

Co-written by Beckman and Doug Bennett, the show is a crafty program of accomplished trickery and artful patter that Beckman smoothly delivers. He was born in Russia, grew up in Israel, took up illusions at the age 14, and came to prominence after appearing on television on Penn & Teller: Fool Us.

My hope is to rebuild people’s childlike sense of wonder, bridging the gap between dreams and reality.

In Vitaly: An Evening of Wonders, Mr. Beckman wonderfully achieves this goal with his superb feats and ingratiating presence.