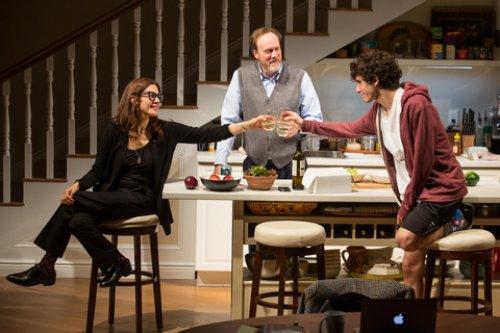 Following his debut plays Bad Jews and Significant Other, Joshua Harmon turns to another play about a young person with an axe to grind. While the two earlier plays were about religious faith and family, and love and sexual relationships, the new play, Admissions having its world premiere at Lincoln Center’s Mitzi E. Newhouse Theater, concerns current ideas about affirmative action and reverse racism in the name of diversity as practiced by white liberals. Elegantly written and well-made as if by clockwork by Harmon, Daniel Aukin’s smooth as silk production will rivet your interest with its twists and turns but may make you very uneasy. After all, which side are you on?

The second play this month to concern a high school in a rarified atmosphere, Admissions takes place at Hillcrest, a tony New England prep school in the New Hampshire woods. Head of Admissions Sherri Rosen-Mason (Jessica Hecht) has worked for the last 15 years to make diversity evident on the campus of The Hillcrest School while her husband Bill (Andrew Garman), the headmaster, has done the same thing in his capacity. When she arrived, the school was 94% white and 6% students of color. Under her tenure, it has risen to 18% students of color on the way to 20% for the following school year. However, she is continually battling her assistant, the elderly Roberta, over the admissions catalog as Roberta doesn’t get that if the photographs only show white students, students of color will not want to attend Hillcrest.

Her real problems begin when her 17-year-old son Charlie (Ben Edelman), a senior at Hillcrest and the assistant editor of the school newspaper, receives a deferred admission to Yale, long the school of his choice, while his best friend since they were three, Perry also on the baseball and basketball teams, is accepted to Yale. Suddenly for the first time, Charlie resents the fact that since Perry is biracial, (his mother Ginnie (Sally Murphy), Sherri’s best friend is white and his father Don, an English teacher at the school is black,) he may have had an advantage in this age of required diversity. 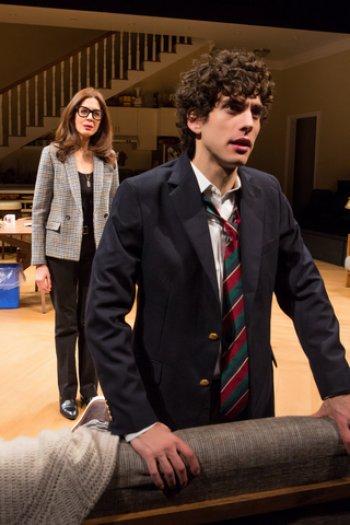 This leads Charlie into a lengthy rant as to how race and gender is now used against him in place of grades, extracurricular achievement and credentials. Charlie also throws up the fact that Olive, a girl, was appointed editor of the school paper even though he was the better choice, after a letter was received by the faculty adviser that a female had not had the job in anyone’s memory. Bill tells Charlie off as a spoiled brat of white privilege and not being true to the way he was brought up by him and Sherri. (Didn’t they give him the middle name of Luther to honor Dr. King?) However, when Charlie has a change of heart and decides to go to a community college, Sherri and Bill find their liberal beliefs called into question. Is it fair for Charlie to sacrifice his future in the name of helping others?

Admissions is often very funny like when Sherri has to try to explain why Melville’s Moby Dick is not being taught anymore (a book about a white whale by a dead white guy) and when Charlie is annoyed that girls in his class object to reading Willa Cather, a woman and a lesbian rather than a person of  color. Although the play is intended to be unsettling to white liberals, it is too neat in its setup. It would have to be Sherri who has spent 15 years creating diversity at Hillcrest whose son may be affected by affirmative action and Charlie and Perry who have been best friends almost all their lives should be divided by Yale’s admission choices. Perry’s picture in the admissions catalog is rejected as he photographs white and does not look like a person of color, but to find a group shot demonstrating diversity it ends up having to be staged. And Charlie’s 180 degree change of heart plunges his parents into a great dilemma: do they use their personal contacts to see what can be done, something Sherri and Bill have not been averse to in the admissions office at Hillcrest for others.

Under Aukin’s direction, the cast of five is uniformly excellent although there is artificiality about the whole production. Hecht, whose desk is center stage throughout, is more subtle and less mannered than usual in the central role of the head of admissions whose liberal beliefs are called into question. McDonough is a figure of fun as the elderly employee who would like things to be the way they used to be. Edelman is most convincing as the teenager who is having trouble with the realities of his world. His almost 17 minute rant on how reverse racism and gender parity is being practiced today is a tour de force. Garman brings authority to his role as the headmaster and Charlie’s father. As the equally liberal Ginnie, mother of Perry and wife to Don, Murphy seems intentionally light-weight. 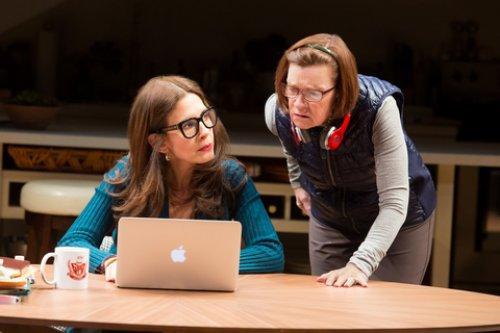 Riccardo Hernandez’s single setting on the thrust stage of the Mitzi E. Newhouse Theater cleverly overlaps Sherri’s office and her home kitchen with the action easily going back and forth between the two. The costumes by Toni-Leslie James for the tony prep school and its three age groups are pitch-perfect. Mark Barton’s lighting makes suitable shifts from the office to the home and back again.

Joshua Harmon’s Admissions with its punning title raises some very pertinent questions about race and gender at this moment in time and is unsettling in the undercurrent of hypocrisy it reveals. On the other hand, it ultimately has no answers and is as intricately worked out as a Chinese box, a dramaturgical coup, but which seems a bit too neat for its own good. However, Daniel Aukin’s production makes for riveting theater no matter how this story of affirmative action and reverse racism strikes you.