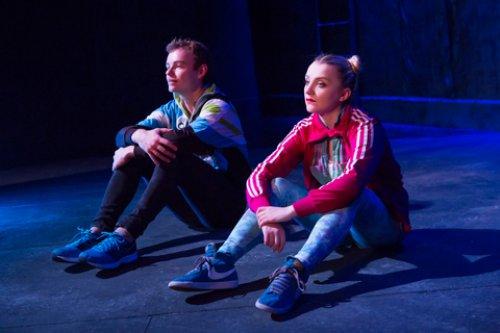 Although Irish playwright Enda Walsh is best known to New Yorkers for his acclaimed musicals, Once and Lazarus both of which started life at the New York Theatre Workshop, he is best known elsewhere for his hard-hitting two, three and four character plays many of which have been seen at St. Ann’s Warehouse. Among these titles are The Walworth Farce, The New Electric Ballroom, Misterman, The Last Hotel, Arlington, and their co-production with the Irish Arts Center of the site-specific Rooms. Currently New York is having a mini-Walsh festival with the American premiere of Ballyturk at St. Ann’s and the 20th anniversary revival of his breakout play, Disco Pigs, at the Irish Repertory Theatre.

Walsh shot to fame in 1997 when he won both the George Devine Award for Most Promising Playwright and the Stewart Parker Award for Best Irish Debut Play for the United Kingdom premiere of Disco Pigs. Debuting in New York in 2008, the current production at the Irish Rep was first seen at Trafalgar Studios, London, in July 2017, and comes to NYC with its original cast and production intact. This two- hander featuring Evanna Lynch (Luna Lovegood in the Harry Potter films) and Colin Campbell follows the night-time adventures of two Cork teens, inseparable since birth, who are celebrating their 17th birthday rampaging through the pubs and discos of “Pork Sity” as they call it. 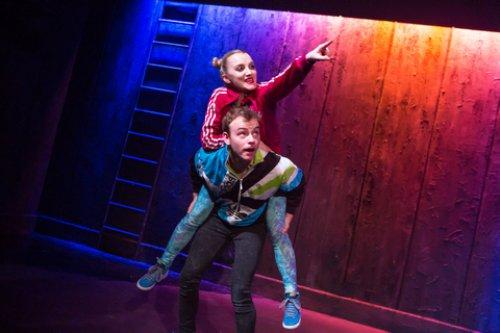 Born at the same time on the same day in the same hospital, Pig (aka Darren) and Runt (Sinead) have been inseparable, speaking in a language of their own, and having created a private world with its own mythology. On the occasion of their joint 17th birthdays, they spend two nights on the town going from pub to disco to home and back again on a drink-fueled journey that gets out of control. They discover that they are no longer the same adolescents they once were when Pig’s sexual urges begin to play a part in their relationship and Runt begins to grow away from him. As in many of Walsh’s plays, Pig and Runt live in a hermetically sealed world that has little or no room for other people and is slowly stifling them.

John Haidar’s energized production turns this material into a tour de force for Campbell and Lynch who are continually moving about spewing volumes of words, almost choreographed by movement director Naomi Said. Deeply in character, they seem to be living their adventures which include humor, fantasy and violence. However, American audiences will have difficulty with the thick Cork accents and Irish slang, as well as Pig and Runt’s private language which often resembles baby talk when it doesn’t sound like street poetry. 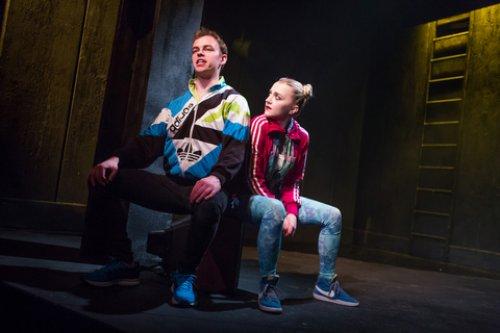 Aside from the monologues which Walsh has in common with many other Irish playwrights, he uses a storytelling technique in which the two characters often narrate their own tale. This makes it more difficult to keep the emotional temperature of the play rising as it continually breaks the fourth wall. As a result the surprising and shocking ending doesn’t seem realized but tacked on.

Just as in the script, the production designed by Richard Kent uses no scenery except a television set and a microphone to set the scene for the bus, the off-license liquor store, the pub, the shore, the bedroom, and the disco. As the play has few transitions it is difficult to know where the characters are at any given time. The most effective element in the production design is Elliot Griggs’ lighting design which is very often used to set the scene. The sound design by Giles Thomas includes snatches of 90’s songs which are in keeping with the 1996 time period when the play was written and takes place. 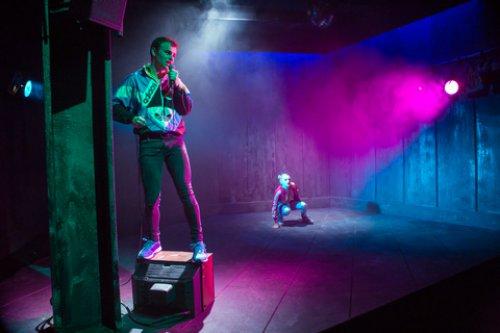 Enda Walsh’s Disco Pigs is an important play from one of Ireland’s leading contemporary playwrights. Aside from his Tony Award-winning musical Once adapted from someone else’s screenplay, it may also be the introduction for many New York theatergoers to this writer’s work. Americans may find it both challenging and opaque, putting a distance between them and the story and characters on stage. Like the work of his contemporaries Philip Ridley, Simon Stephens, Martin McDonagh and Colin McPherson, he takes on big themes. However, this revival of Disco Pigs may be too impenetrable for many viewers.