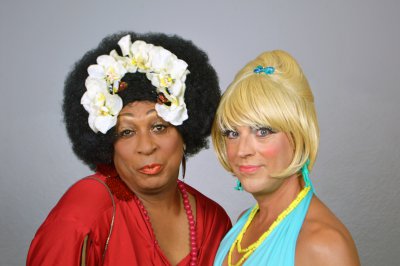 [Note: This is a review of the 2015 production which had most of the same cast.]

This play is called Street Theater on account of it’s all about this bunch of lowlifes.  Juicebums, hopheads, weirdos, oddballs, queers—what you call your “artistic element.”  The usual gutter crud you got to expect to contend with down here in Greenwich Village.

The downstairs of the gay leather Eagle Bar has been configured into a runway-style performance space with rows of white folding chairs.  This setup is for this giddy revival of the panoramic fantasia Street Theater by Doric Wilson.  The play takes place on June 28, 1969, before, during and after the Stonewall riots on Christopher Street in Manhattan.

“Faggots aren’t made, they’re happenstance. That’s why the quality’s so inconsistent,” a male drag prostitute says to his colleague.  “I’m a practicing heterosexual on a leave of absence,” says a closeted older man in a raincoat.  “I can’t work the toilets.  I’m claustrophobic,” says one crooked vice cop to another. “I’m not queer. I just like to fool around,” he later says when caught about to have sex with another man.

The gallery of colorful characters parading around also include a flower child, the straight manager of The Stonewall Inn, gay radicals, a loud lesbian, a gay young man who just arrived in New York City, and a snobbish gay male couple who are parodies of the middle-class characters from The Boys in The Band.

Their authentic and often garish appearances are the result of the outstanding work of costume designer Chris Weikel and wig and makeup designer Zsamira Sol Ronquillo.

Director Mark Finley’s masterful staging forcefully choreographs the 14-member ensemble throughout the action with perfect precision.  Mr. Finley has the action fast paced enough that it captures the comedy, excitement, and drama of those monumental days.  Except for a pole with the signs of Sheridan Square and Christopher Street, there is no scenery and so Finley and the highly talented cast’s work is an impressive feat of pure theater.

Clearly you are unread and unawares of Thornton Wilder whom I am emulating in this my introduction of them to our town here so to speak. (to the audience) He was of your lavender leaning, Thornton Wilder. Bet they never taught you that in school.

Playwright Doric Wilson (1939-2011) was a leading figure of the early gay theater movement.  His career began in the early 1960’s at the fabled Café Cino in The West Village where his first plays were staged.  Street Theater is arguably his masterpiece and has been performed numerous times since its 1982 San Francisco premiere.  Later that year it was done in a downtown New York City theater, then it moved to the S&M club, The Mineshaft, and finally to The Actor’s Playhouse.  In 2002 and 2003 it was revived for six-week engagements at The Eagle under Mark Finley’s direction using the author’s definitive script.

“The incidents in Street Theater are all autobiographical… The characters are based on actual people,” wrote Wilson in the play’s introduction. He created a vibrant time capsule of that era richly detailing each character with biographical facts that are sometimes quite poignant and often earthy witty dialogue.  It is a tremendous historical and theatrical achievement.

The Stonewall Inn was a popular Mafia-run gay club whose clientele were mainly the underclass of the gay world that included drag queens, prostitutes, homeless youths, and very out gay men and women.  Police raids to investigate possible drug sales and other infractions where patrons were harassed and often arrested were common.   During the raid on June 28, 1969, many there were uncooperative with the police and a riot broke out that also involved hundreds of people on the street outside.  There were also clashes with the police the next night there.  These events are considered a landmark in the cause for gay rights and the next year the annual gay pride parade began on the raid’s anniversary.

The Stonewall riots have been the subject of documentaries and two fictionalized films one in 1995 and the other in 2015; both of these were critical and popular disappointments.  This superb production of Street Theater vividly dramatizes the background of those events and the people involved.  It also brings attention to Doric Wilson who did not attain widespread acclaim and commercial success during his lifetime.

TOSOS (The Other Side of Silence)