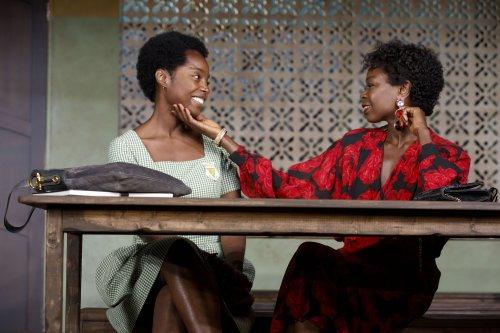 We’re at the Aburi Girls Boarding School in Central Ghana, in 1986.  The imperious and insecure Paulina rules over her clique with an iron hand.  An official will be arriving to select one girl to represent Ghana in the Miss Global Universe pageant.  Becoming Miss Ghana will be her ticket out of poverty. For the competition, Paulina plans to wear her “Calvin Clean” dress that’s a Chinatown knockoff sent to her by her aunt in New York City, who works in the “high class restaurant,” White Castle.

The arrival at the school of a new transfer student from the United States upends Paulina’s assured plan. Erica was born in Ghana, is light-skinned, beautiful and seemingly grew up carefree as her father owns the largest cocoa company in the country. The two become rivals and a series of underhanded machinations are instigated.

Ms. Bioh’s snappy dialogue perfectly renders the rhythms of teenage lingo and the pain beneath the bravado, emitting the universality of adolescence.  Bioh’s construction is meticulous as the events play out over 70 tight minutes.  Besides the foreign setting there’s nothing really “new” about the play but’s it’s so well written and gloriously presented.

The winner of the Tony Award for Best Direction for last season’s Indecent, Rebecca Taichman, brings her focused skills to this cafeteria-set conflict. Ms. Taichman injects many neat flourishes that include a character’s twirling as she exits and a hilarious production number for the girls singing Whitney Houston’s “The Greatest Love of All.”  The pacing is swift, the physical staging is fluidly precise and the performances are all vivid. 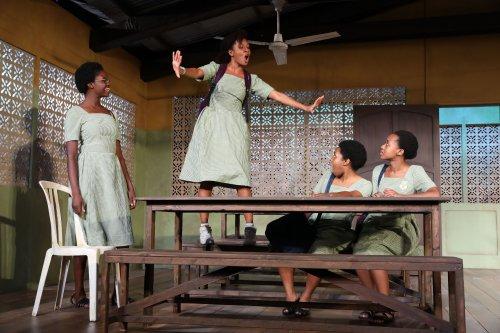 As Paulina, MaameYaa Boafo magnetically conveys the heartache of this sad bully with her fierce though fragile portrayal.  The captivating Nabiyah Be is a warm-hearted and strategically feisty Erica.

With jolliness, tenderness and exasperation, Myra Lucretia Taylor delivers a grand character actress turn as Headmistress Francis, who valiantly struggles to keep the school going and instill proper values in the students.

Zainab Jah is steely and chilling as Eloise, the pragmatic pageant official.  She was a classmate of Francis at this same school and went on to become Miss Ghana of 1966.  Ms. Jah offers a searing portrait of the amoral girl who made good at no matter the cost.

Paige Gilbert, Níke Kadri, Abena Mensah-Bonsu and Mirirai Sithole are the animated and gifted quartet who plays the other students.  Each of them makes the most of their numerous golden moments during the play with their delightful performances.

A corrugated steel roof, ceiling fans, wooden picnic benches, and lattice windows are the components of Arnulfo Maldonado’s fabulous scenic design that instantly imparts the sense of being in another country. 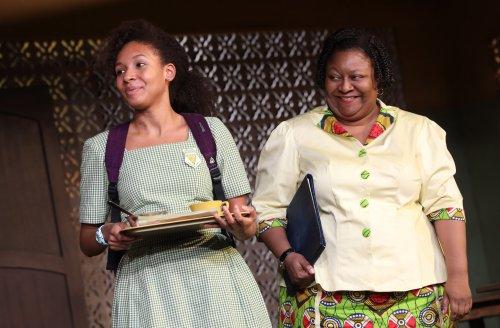 Nabiyah Be and Myra Lucretia Taylor in a scene from “School Girls; Or, the African Mean Girls Play” (Photo credit: Joan Marcus)

That effect is magnified by Jen Schriever’s lighting design with its golden rays replicating the African sunlight streaming through the windows. Ms. Schriever also realizes runway and musical sequences with suitably glaring hues.

Besides authentic looking school uniforms, costume designer Dede M. Ayite has created an array of gorgeous apparel appropriate for a beauty contest that showcases each actress.

The unison of all School Girls; Or, the African Mean Girls Play’s accomplished elements make it vastly entertaining.