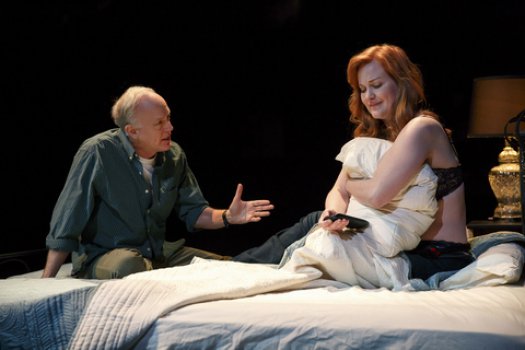 Reed Birney and Heidi Armbruster in a scene from “Man from Nebraska” (Photo credit: Joan Marcus)

The mid-life crisis story used to be a popular staple of literature and drama. Famous examples are the novels, Henry James’ The Ambassadors, Sinclair Lewis’ Babbitt and Dodsworth, George P. Marquand’s The Late George Apley, Saul Bellow’s Herzog, and John Updike’s Rabbit series, Eugene O’Neill’s dramas, The Moon for the Misbegotten and Hughie, and the films Save the Tiger and A Serious Man.

Tracy Letts’ 2003 Pulitzer Prize-nominated Man from Nebraska is first having its belated New York premiere at The Second Stage Theatre in a peerless production by David Cromer with a cast led by 2016 Tony winner Reed Birney and co-star Annette O’Toole. This low-key play by Letts is unlike any of his other four plays to have been presented here. It may leave you close to tears and emotionally drained. The play is not so extraordinary as much for what it says, but what it leaves unsaid.

Ken Carpenter (played by Birney) is a 57-year-old insurance salesman in Lincoln, Nebraska. On a typical Sunday after he and his wife Nancy (O’Toole) have been to church and visited his mother Cammie (Kathleen Peirce) in a nursing home, he has a mid-life crisis where he finds he no longer believes in God. As a result he feels empty and bereft. Nancy can’t help except to suggest he speak with Pastor Todd (William Ragsdale). When Todd discovers that Ken has not had a vacation alone in 20 years, he suggests that Ken take a break to find himself. The second act finds Ken in London alone where he had been stationed in the Air Force some 40 years before. 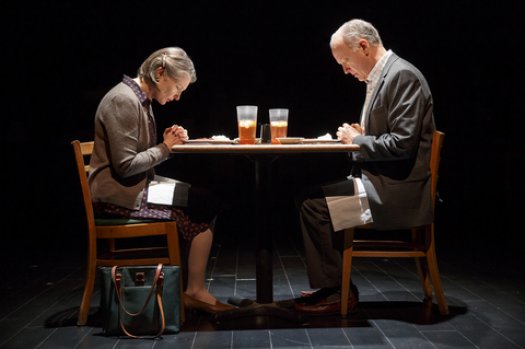 Annette O’Toole and Reed Birney in a scene from “Man from Nebraska” (Photo credit: Joan Marcus)

Birney seems to have cornered the market on sensitive, ordinary guys and his performance is similar to his awarding-winning “Erik” in The Humans. However, here he is extremely sympathetic and heartbreaking while in the earlier play he was revealed to be complicit in criminal behavior. Birney’s work is so subtle and low-key that he suggests worlds of unspoken feelings, which is quite a remarkable feat. O’Toole, who recently appeared on the New York stage in Hamlet in Bed in 2015 and Southern Comfort in 2016, just keeps getting better and better, and her emotional collapse as Nancy is extremely well delineated. As their daughter Ashley, Boras beautifully captures the whiney demands of the adult child with a black and white view of the world who has never seen her parents as separate people with needs of their own.

Mensah makes the wise and compassionate Tamyra into a memorably original character who continually surprises us. As her boyfriend, a kind of latter day hippie, Moore has all of the requisite joie de vivre. Armbruster is very vivacious as the American divorcée out for a good time. Ragsdale’s Reverend Todd negotiates a fine line between comic and meaningful. As his 75-year-old father, Tom Bloom is irrepressible as a senior citizen who still has a zest for living. Peirce’s Cammie is a frightening portrait of a woman beset by dementia. 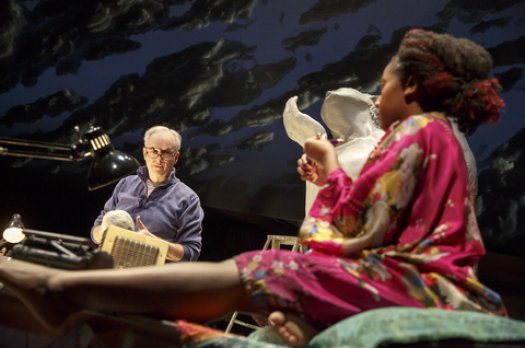 Reed Birney and Nana Mensah in a scene from “Man from Nebraska” (Photo credit: Joan Marcus)

In order to deal with the many short scenes, Takeshi Kata’s clever set design has several settings side by side in the back of the stage that are either brought forward or played from there which allows for smooth and quick transitions. Designer Keith Parham’s pools of light brilliantly pick out and isolate each set as needed. Sarah Laux uses her costume design to define her nine characters’ very different personalities. Daniel Kluger’s sound design suggests off stage worlds we don’t see, as well as the perennial television sets at the nursing home and Ken and Nancy’s house.

Director David Cromer does for Tracy Letts’ Man from Nebraska what he did for Thornton Wilder’s Our Town. What might have been clichéd or overly familiar in his hands becomes something extraordinarily new and moving. Reed Birney turns Ken Carpenter’s search for meaning into a dark night of the soul that we can all relate to. Low-key and subtle in its dramatic effects, Man from Nebraska is an important play to finally reach New York.