Pete Simpson as Angelo and Rinne Groff as Isabella in a scene from Elevator Repair Service’s “Measure for Measure” at the Public Theater (Photo credit: Richard Termine)

Having created stagings of books by famous American novelists (Fitzgerald’s The Great Gatsby, Hemingway’s The Sun Also Rises, and Faulkner’s The Sound and the Fury), the inventive Elevator Repair Service has turned its attention to William Shakespeare for the first time as a resident company at The Public Theater. The Marx Brothers meet Monty Python in their inventive but exhausting version of Measure for Measure, Shakespeare’s problem comedy reset in the 1930’s and mostly played at a breakneck speed. There are some clever devices making this dark play a sunny slapstick comedy (a plus) but overall it is too frenetic, making it difficult to follow or keep up with the pace (a minus). If you have never seen the play before, it is probably very difficult to follow. It becomes all about the production while at times making a joke out of the play. And at two hours and twenty minutes, it simply overstays its welcome.

Director John Collins, founder of ERS, has set the play in an office or conference room with three long tables (in Jim Findlay’s design which eventually grows tiresome)  and a great many stick telephones by which the characters often call each other to relay Shakespeare’s lines as if they are working from their offices. The walls of the set become screens for the text to scroll upwards through most of the play; at time we even see it five ways including the ceiling and with four panels in the back as well as on the back wall. Whether this is to remind us that this is a play of language, it is usually distracting and not very revealing. Often the actors speak so fast that it impossible to follow them and then in a brilliant coup de theatre one scene (that between brother and sister Claudio and Isabella) is spoken so slowly that it seems to reveal hidden meanings not noticeable before.

Dressed in 1930’s costumes by Kay Voyce, the cast looks like they are in a Hollywood movie of the period and the unit set allows the play to move swiftly. The production remains faithful to the plot while some of the traditional male roles have been given over to actresses (the Provost, Elbow and Abhorson here combined, and Pompey the bawd. Gavin Price and Susie Sokol play multiple roles so well that it is almost unnoticeable when they reappear as someone new. 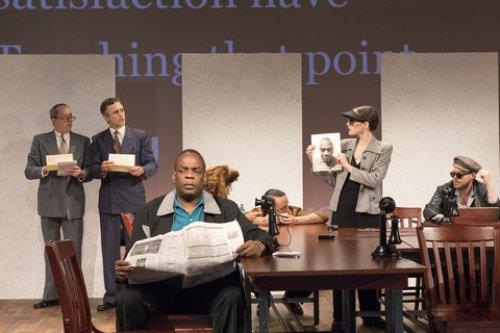 Shakespeare’s timely play deals with the letter of the law versus the spirit of the law, as well as abuse of power and sexual harassment. Having been lax in enforcing the laws during his 14 year reign, the Duke of Vienna finds that there is too much vice in his city. However, realizing that he is not the person to make changes, he appoints the upright and severe Angelo in his place and pretends to leave on a long diplomatic mission. In fact, he remains in town disguised as “Friar Lodowick” to witness the effect of the new administration.

With his new powers, Angelo immediately begins enforcing the repressive laws already on the books: the bordellos are shut down and Claudio is arrested for fornication and sentenced to death, though he and his pregnant girlfriend Juliet are awaiting the negotiation of the dowry in order to marry. His friend Lucio, a vulgar and rambunctious man about town, insists that Claudio’s sister Isabella, a novice nun soon to take orders, visit Angelo and plead for her brother’s life.

Attracted by Isabella, Angelo agrees to pardon Claudio but only if Isabella spends one night with him. Overhearing Isabella tell Claudio in prison that she cannot succumb to Angelo’s plan, Friar Lodowick offers a solution: substitute Mariana, Angelo’s jilted fiancée, in what has come to be known as the bed trick. While Angelo does not live up to his part of the bargain demanding the head of Claudio as proof of his execution, things are eventually returned to their rightful place when the Duke reappears and resumes his rule. This may be a dark problem play but it is also a comedy and at times it is even funny. 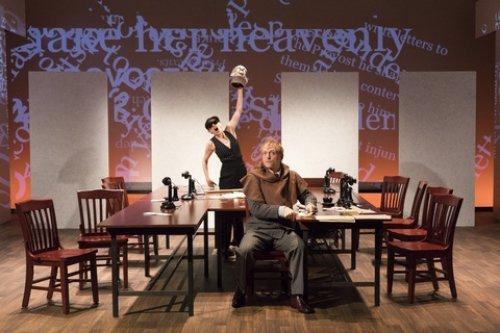 Maggie Hoffman as the Provost and Scott Shepherd as the Duke in a scene from Elevator Repair Service’s “Measure for Measure” at the Public Theater (Photo credit: Richard Termine)

All of the cast have appeared in Elevator Repair Service productions in the past and are fully attuned to Collins’ concept although several different styles are represented. As The Duke with a British accent, Scott Shepherd impresses as if to the manner born, a courtly ruler who assumes his divine right of leadership. Dressed in a tight black skirt and matching cape, high heeled shoes and a feathered hat rather than the usual nun’s habit, Rinne Groff is commanding as an impassioned and rational Isabella. Pete Simpson’s Angelo is a bureaucrat who has let power go to his head.

Greig Sargeant makes Claudio a dour, glum presence, a surprise as he is usually seen as a bon vivant playboy. On the other hand Maggie Hoffman is amusing as an efficient, frenetic Provost, warden of the prison, while Lindsay Hockaday with a big mustache (who also plays an overwhelmed Juliet) is expansive as the pimp Pompey. April Matthis makes a strong impression as a tenacious Mariana, a role that is often downplayed. Mike Iveson’s Lucio is less outrageous than expected though equally bawdy and brazen in a low-key manner.

Elevator Repair Service’s Measure for Measure is an ambitious experiment of a play seen twice before in only the last few months. As directed by John Collins with the company, the play has been gimmicked up with enough ideas for several productions. At its best, the show reinvents Shakespeare for modern times; at its worst it is distracting, confusing and hard to follow. If only it had stuck to the clever idea of Shakespeare comedy as a marriage of the Marx Brothers and Monty Python.

Measure for Measure (extended through November 12, 2017)

Running time: two hours and twenty minutes with no intermission