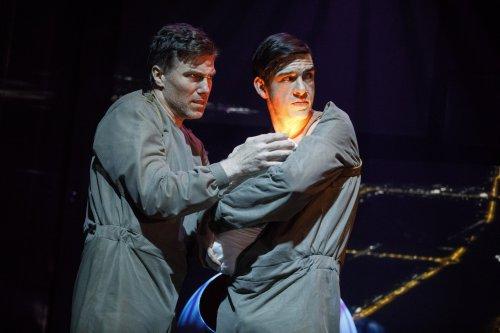 “Dude, I’m pregnant,” says one man to another at the beginning of the tiresome and not funny Mankind. It’s a futuristic satire where women are extinct, men get pregnant and abortion is outlawed. The first act concludes with a cringeworthily religious ceremony that incites the audience to stand and recite a hymn and also involves passed around gold replicas of a dead baby. The convoluted inanity intensifies in the second act with tepid skewering of cults and reality television.  All that’s missing is Ming The Merciless.

Playwright Robert O’Hara’s fertile premise might have made for a provocative, sober sci-fi take on gender roles, sexuality and parenthood. Instead, it’s broadly conceived and lame. The flat dialogue is in the vein of Abbott and Costello with numerous jokes about “fathers” since there are no mothers. The “Dude, I’m pregnant” bit gets painfully recycled.

Jason and Mark have been hooking up for a month and Jason discloses that he’s pregnant.  Not feeling ready for such a commitment, they opt for an illegal abortion and get caught up in the legal repercussions of a totalitarian government. 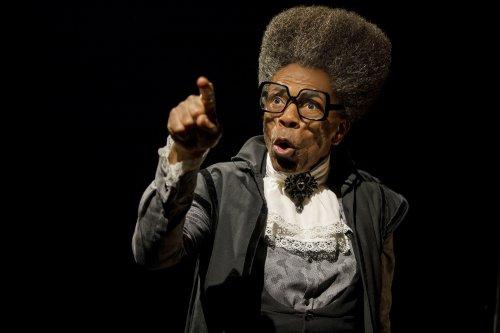 Mr. O’Hara’s visually energetic direction does inject swift pacing to his cartoon-like vision and he has the cast appropriately in overdrive.

Bobby Moreno and Anson Mount gamely perform as Jason and Mark, respectively. Mr. Moreno and Mr. Mount have a fine chemistry together and both have a forceful commitment to their superficial roles.

With a wild beehive and wearing judicial robes, the great André De Shields makes the most of his appearance as a malevolent prosecutor.  Mr. De Shields’ precise and honeyed diction and commanding physical presence elevates this deficient material considerably. De Shields also charismatically appears in several other parts. 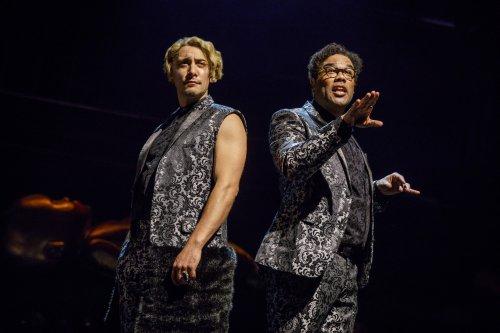 Overblown, hollow and pointless, Mankind is watchable but makes no impact.