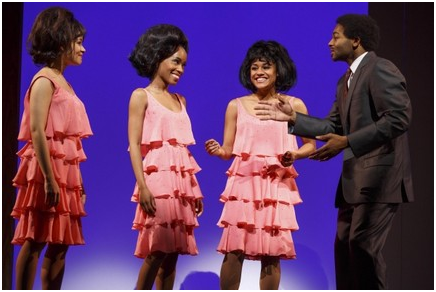 In this huge and loving tribute to himself, his music, his stars, Berry Gordy is producing and writing an overstuffed, overcharged, oversized musical in thirty-six settings, fifty-eight songs, twenty-two musicians, forty-one performers, to an additional complement of twenty-nine production entities, and three producers, one of which, of course, is Berry Gordy. Even if they sell out to the walls on the strength of the fans for the music, beautifully orchestrated and performed, it can’t possibly make enough money to pay for itself. The sheer pandemonium of audience response has to be payment enough which is probably all the coin that “BG” is really after and he gets it in waves, cascades, deluges. “BG” has squeezed a cavalcade of events from 1938, before the actual founding of Motown to 1983, the 25th anniversary celebration that he is reluctant to attend, in this, Gordy’s already selective telling. He couldn’t contemplate fitting in the forty years thereafter. Which nobody could have stood anyway, overwhelming as the first 25 years were. 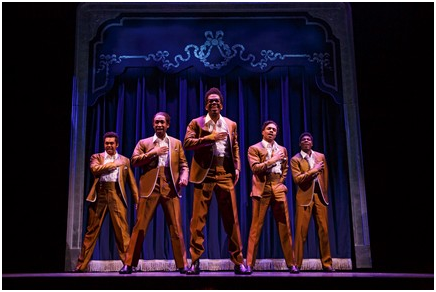 The sheer quantity of the talent Berry Gordy discovered and developed is staggering. And quite as staggering is the sheer quantity of talent playing these now famous star entities. In addition to the eighty plus characters played by the show’s huge company, the show’s four stars, Brandon Victor Dixon as Gordy, Valisia LeKae as Diana Ross, Charl Brown as Smokey Robinson and Bryan Terrell Clark as Marvin Gaye, names so familiar it would seem impossible to fill their shoes, but so convincing are they that the audience reacts to them as if they were really the stars. Diana Ross in her “Reach Out and Touch” number brings down the house. It’s not Valisia LeKae, it’s Diana Ross, every glittering inch. 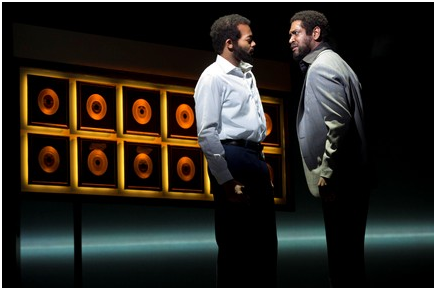 Brandon Victor Dixon as Berry Gordy and Bryan Terrell Clark as MarvinGaye in a scene from “Motown: The Musical” (Photo credit: Joan Marcus)

And that is just one of the pulsatingly real re-enactments. Little Raymond Luke, Jr. (alternating with Jibreel Mawry) as a very young Michael Jackson summons roars of applause. Song after song, number after number elicits gushes of nostalgic, and even, brand new love, happily extending an overextended generosity of Motown hits that director Charles Randolph-Wright manages to mount with swift precision and zeal. Everybody pitches in, David Korins’ set design is everything from awesome to klunky, constantly in motion, trying to be something for everyone. Esosa has devised costumes for the hundreds of costume changes, from actual modesty to its actual opposite. And wigs? Designer Charles G. LaPointe leaves no hair unturned, miles, generations of wigs upon wigs. Talk about awesome. Peter Hylenski’s sound design burrows right through you. Natasha Katz’s knowing lighting keeps us focused where we’re supposed to be. From Ethan Popp’s music supervision to Patricia Wilcox and Warren Adams’ vivid choreography, the whole vast enterprise is a well-oiled machine. 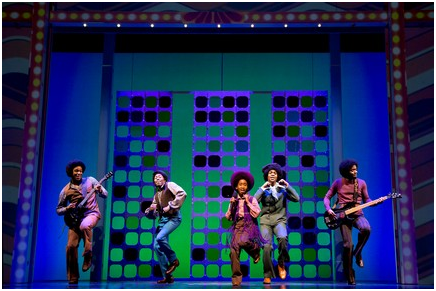 Raymond Luke, Jr. as Michael Jackson with the Jackson 5 in a scene from” Motown: The Musical” (Photo credit: Joan Marcus)

Emerging through the make believe is the real goal. As much as every single one of the performers yearns for the spotlight, for success, for fame, striving endlessly to achieve, ultimately they find themselves at the place they have never even named, that is not mentioned in this unruly bundling of egos and talents, business and guts. They arrive at the pinnacle: acceptance, respect, total recognition. It’s a helluva journey. In this, Gordy’s account, he may have smoothed out the rough spots, he may have polished off the sharp spots, but he didn’t wipe out all the hurt along the way. And it is not just churning product out for the music business. At its best, Motown has been a world changer. You’ve got to hand it to him. Come June, he enters the Songwriters Hall of Fame. And he’s only 83.
Motown (through January 18, 2015)
Lunt-Fontanne Theatre, 205 West 46th Street, in Manhattan
For tickets, call 877-250-2929 or visit http://www.Ticketmaster.com
or http://www.Motownthemusical.com