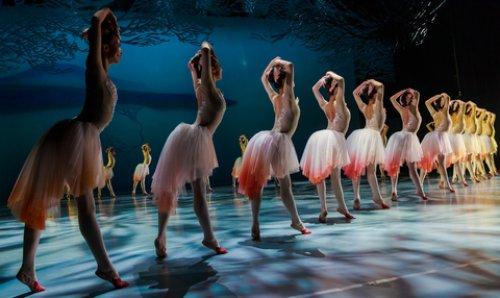 Despite a title that conjured a PBS documentary, the Shanghai Dance Theatre’s ballet Soaring Wings: Journey of the Crested Ibis was a work of art.  It overflowed with imagery ranging from the darkly despairing to the naively hopeful, the winged creature of the title a metaphor for hope and humanities’ dire effect on nature.

Ibis, a gentle work staged in a spectacular manner, filled the David H. Koch Theater stage with dozens of performers, telling an intimate love story while simultaneously—and cleverly—preaching conservation.  The background to the central tragic romance was the slow extinction of the Crested Ibis, which playwright Luo Huaizhen, director/choreographer Tong Ruirui and choreographer He Tao fleshed out They were greatly helped by the projections of haunting landscapes by scenic designer Zhang Jiwen and the costumes of Zhong Jiani which ranged from peasant garb to the elegant, flowing attire of the chorus of Ibis.  Xing Xin’s lighting turned the stage action into wonderfully varied images.

This love story clearly and unapologetically took many cues from Swan Lake.  A young man, played with a combination of humility and passion by Wang Jiajun, and the head of a flock of Ibis, divinely danced by Zhu Jiejing, meet and begin a relationship clearly defined by the choreographers’ inventive, smooth entwining of their two bodies, their longing gazes and the flow of the chorus across and around the large stage. 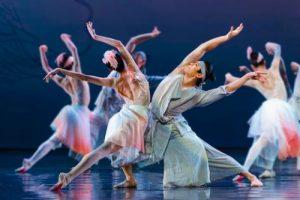 Ibis opened with scenes of harmony between a bustling small village—clearly from a distant past—and nature.  The young man meets the queen Ibis and a series of picturesque rendezvous become nervous encounters as human civilization encroaches on the Ibis’ territory.  When the man ages, he sees his beloved in a display case in a museum from which he frees her, leading to a touching coda that consummates their relationship in sweeping choreography.

The famous Chinese ability to subsume themselves in crowds was evident in the flowing choreography for the mass “flight” of the Ibis across the stage.  The precision of the corps de ballet did not, however, lessen regarding each dancer as an individual as they flew past in ever-changing patterns. The creators of Ibis also gave life to the inhabitants of the small town and the young modern urbanites who show up at a museum to learn about the birds with which they had peacefully co-existed.

The outstanding feature of Soaring Wings: Journey of the Crested Ibis was Tong’s exceptional use of the chorus of birds, their poses, formations—even managing to inject some humor into the drama.

Unlike the usual empty pageantry of other state-sponsored troupes, the Shanghai Dance Theatre puts a human-scaled spin on this work.