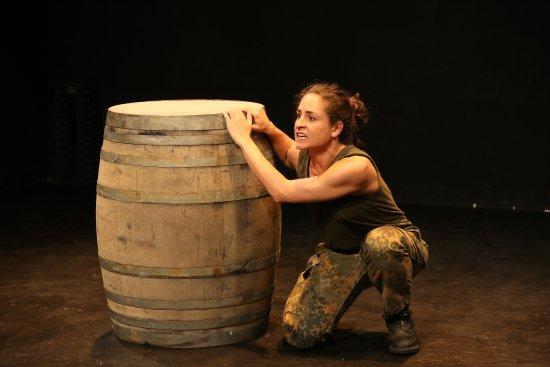 It’s no secret that more than 400,00 people have been killed in Syria over the last six years. But despite the ongoing barrage of daily reports covering the war in Syria, the reasons for the Syrian war remain murky. In his two, one-act plays, Angel and Echoes, Henry Naylor attempts to provide some insights into what has become perhaps the worst of the numerous sectarian wars in the volatile, middle-eastern part of the world. More specifically, Naylor focuses in each of these plays on the plight of women, in the region, where their diminished gender status makes every aspect of life more of a challenge than it is for men.

Presented together on the same bill, Angel & Echoes is part of the Brits Off Broadway Festival at 59E59 Theaters (where, it’s worth noting, Echoes originally played last year). As written by Naylor, enacted with ferocity and vitality by Avital Lvova, and directed with dispatch by Michael Cabot, Angel proves the far more effective (second) half of the evening. That may be because it’s told with an in-your-face immediacy and gumption that elude Echoes, which juxtaposes the lives of two different women, who lived in that region of the world at very different times.

In Echoes, we meet Tillie (Rachel Smyth), a “Victorian pioneer woman,” whose “Christian desire” to produce “children for the Empire,” takes her from Ipswich to India, in search of a husband. (As we’re told, “There are no men in Ipswich” and “There are four men to every woman in India.”) Though there’s more than a century between them, Tillie tells her story in alternating fragments with Samira (Serena Manteghi), a contemporary Syrian native, who was “groomed” for “jihad.” At first, they seem like opposites: Tillie in her all-white, flowing, Victorian gown, and Samira in her all-black “djellaba” and “hijab.” And where Tillie is all subdued restraint, Samira is easily excited and excitable–which is also how they are played, by Smyth and Manteghi. 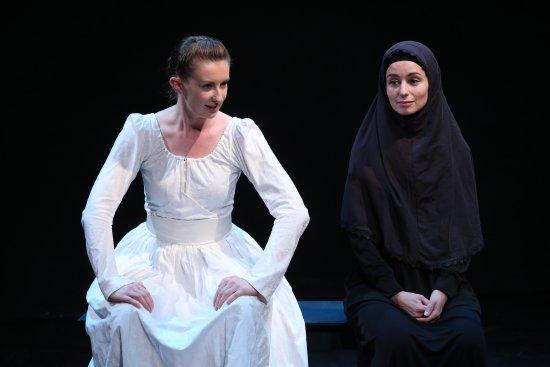 While Tillie finds her husband, a Lieutenant, on a ship to India, where they will live together, Samira finds hers, Akeem, on the Internet, in her friend Beegum’s bedroom. “By Skype,” says Samira, adding, “I have borrowed [Beegum’s] full veil and shield.” Akeem is British, and he lives in Ipswich. “You have a beautiful soul, sister,” he tells Samira. “When you marry me, I will make you a queen.”

Samira describes riding in a minibus to Raqqa with five other brides-to-be, where they will stay in a women’s hostel, “till our fiancés return from fighting.” After she marries Akeem, she’s to share their marital home “with two other females,” one is Akeem’s first wife. The other is a young girl–who Samira mistakenly assumes is their daughter–as she’s a 13-year-old, Yazidi slave: “She sleeps on the floor like a pet,” says Samira.

As they continue to tell their own stories, Tillie and Samira cross over into each other’s space, at one point even sharing the same bench, on the otherwise sparse stage, or black box of a set. After reporting on their respective wedding nights, in bed with their husbands, they also describe going to a market square, where Tillie is confronted by an “old beggarman”–who is horsewhipped by the Lieutenant–and where Samira encounters the “sweet-sour scent of rotting meat” before she notices the fence, which displays “impaled human heads.” Before long, Tillie will also refer to “the stench of rot and decay and death.” By the end, these women, who seemed so very different, have become very similar. They are “echoes” of each other, albeit living in different times and in different places.

Echoes has been directed with a sort of calming influence by Emma Butler, which is ironic, considering the turbulent lives both Tillie and Samira describe. But despite its greater ambitions and the poetry Naylor sometimes achieves with Echoes, it has much less of an impact than Angel. That may be because while Tillie and Samira are describing their violent lives, Angel is reliving hers, during the course of her monologue. 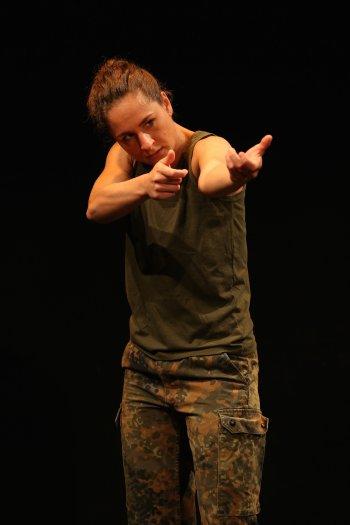 The extremely economical Angel gets right to the point, when Rehana (i.e., “Angel”), “a Kurdish Amazon warrior,” recalls being a 12-year-old farmer’s daughter–just across the border from Turkey, in Syria–when she is asked to shoot her injured  dog, Bizou. “This is a lesson you must learn,” says her father, as he hands her a gun–a lesson which proves extremely useful later, since the somewhat older Rehana kills 100 soldiers, in her effort to retain her independence during the Syrian war.

Now 19 and clad in army fatigues, Rehana relates her living near Kobane, a “bland border town where nothing used to happen.” Perhaps the most surprising element of Rehana’s story is the many American references and proper names she includes matter-of-factly in her monologue, such as William Shatner, Beyoncé, and Mariah Carey.  Naylor’s startling point is that contemporary Arabs have been far more connected to our world, than we might have imagined.

Angel’s story also entails “the smell of sweat and moral decay,” as if viscerally connecting her to Tillie and Samira. She’s eventually shackled, “valued at $350,” and “selected for a rape by a man of influence.” Before being raped, Angel manages to go to the bathroom, where she “opens the wounds” on her wrists, pulls down her underwear, and squeezes her own blood into her crotch, rendering her “unclean” for the rape. She’s a fierce fighter for life on her own terms, in other words, who receives a suitably fierce and gripping performance from Avital Lvova. Long after a kind of Syrian-war numbness has overtaken many of us, Naylor is to be applauded for coming up with such a shocking, convincing, and effective piece.