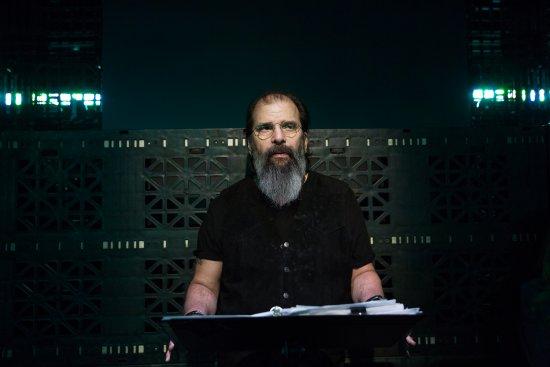 Steve Earle as the Narrator in a scene from Richard Maxwell’s “Samara” (Photo credit: Julieta Cervantes)

The work of experimental playwright Richard Maxwell is an acquired taste as his plays follow their own rules and create a world of their own. The facts are always vague and leave a great deal of interpretation up to the viewer. The tone is at the same time philosophical and existential. This is not for all tastes. Those who expect their theater to be linear and simple to follow had best stay away.

His new play, Samara, commissioned and being given its world premiere by Soho Rep in its new home at the Mezzanine Theatre at the A.R.T./New York Theatres is unusual in several ways. Firstly, it is the one of the few of Maxwell’s 20 plays that he has not directed himself. This one has been staged by Soho Rep’s artistic director Sarah Benson. It also marks the Off Broadway acting debut of country-rock singer-song writer who plays the Narrator and also wrote the background score for the play, plus one song. The cast whose ages span 78 years includes legendary 92-year-old stage actress Vinie Burrows as well as 14-year-old Jasper Newell who had already made his Off Broadway debut in 2014 at the Public Theater.

Although the title Samara suggests that the play takes place in the Middle East, the events and dialogue make it seem like it is taking place in the Old American West. A messenger in the frontier town of Samara is sent by horse to an outpost six days away through the mountains in order to collect a debt from a man he has never met. However, the difficult terrain takes him 11 days and he arrives almost dead and without his horse. At the inn, the Manan, the barkeep, and the Drunk, his proclaimed lover, are not glad to see him and worry that the rainy season will keep him there for months at their expense. 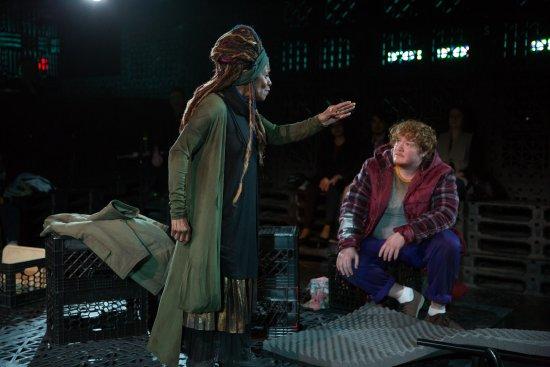 Eventually the Manan and the Drunk make the trek back to civilization and on the outskirts of Samara stumble on the Messenger’s mother and two older brothers, Cowboy and Beast, who are making their own community of three. Earle who has been narrating the stage directions all along then tells the story of a contemporary father and daughter on an eerie car trip on a mountain road at night, possibly the same road the other characters have traveled but at a later date. A light show concludes the play before the cast returns and all do an Irish jig in place. That’s all there is.

The play seems to be in the genre of the classic Western movie though highly poeticized and slow-paced. It resembles the 60’s films of Sergio Leone and Sam Peckinpah but with much less plot and without the scenic vistas. It follows the rules of the old West but creates a mysterious world of its own. Very little is revealed by the characters about themselves, most of whose names are generic (the Supervisor, the Messenger, the Drunk, the Cowboy, the Beast). Much could be read into the events but they remain opaque and obscure as do the characters who reveal little. This is a Samara of the imagination, not a real geographic place.

The set by Louisa Thompson is the most unusual production element: the entire theater is painted black and both the set and seats for the audience are made up of black plastic pallets or interlocking crates. The on-stage pallets are piled up in two sections creating different landscapes. Earle’s score played live by Ivan Goff on the Uilleann pipes and Anna Wray on percussion stationed at opposite ends of the venue gives the performance an otherworldly quality but remains ambient sounds. Burrows gets to sing a sweet new lullaby with words by Earle towards the end of the play. Matt Frey’s lighting is hard on the eyes on the all black space, but gives the audience a respite during Earle’s storytelling towards the end which is performed in total darkness. 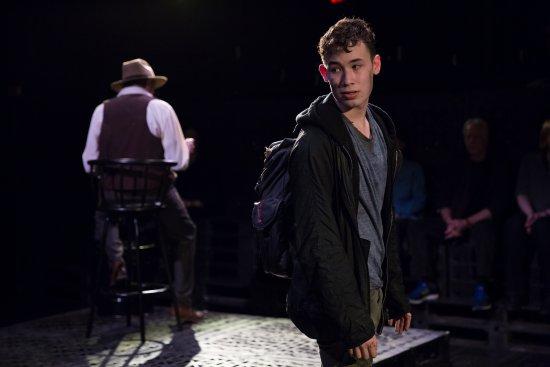 Benson’s direction is unobtrusive and low-key, with characterizations which immediately indicate the actors’ roles. This may be as much due to the Western costumes by Junghyun Georgia Lee as to the direction. Aside from Burrows’ impassioned and authoritative acting as Agnes, the mother of the three men, the rest of the actors give performances which are flat and uninflected as if trying not to put any emotion into words that could be taken in more than one way. Even Earle’s narration is low-key and unemotional. The most complex role is that of Becca Blackwell as the Manan. As Blackwell is a bearded transgendered performer, the word “manan” might stand as a mash up of man and woman, but as usual in a Maxwell play no explanations are given.

Samara will strike some as a meditation on solitude, integrity and the code of the old West. It may strike others as tedious and pretentious. Others may simply be confused or await answers that are not forthcoming. Richard Maxwell has forged a career as an experimental playwright and director. If you are intellectually curious or interested in alternative theater, this may be as good a place to start with his work as any.