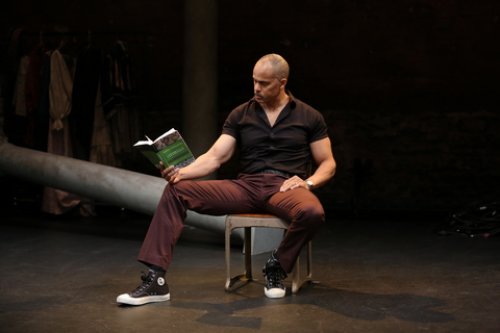 Performed at white-hot fury, Keith Hamilton Cobb brings his (mainly) one-man show, American Moor, to Off Broadway’s Cherry Lane Theatre, under the auspices of Red Bull Theater. Using the framework of an actor’s audition to play the role of “Othello,” Cobb uses this as jumping off point to discuss Shakespeare, race relations, Othello (the play and the character) and the state of the American theater. Provocative and angry, American Moor takes Othello the man apart from the inside out, from the point of view of an African American male who has had 30 years’ stage experience. It is a tour de force performance that you will not forget although if you are Caucasian you are likely to feel more than a little guilty by the time the play is over.

Waiting to audition for the title role in Othello, Cobb playing The Actor first tells us that he fell in love with Shakespeare when he first heard it spoken from the stage as it was intended to be, and realized he wanted to be an actor. Told by an early drama teacher that “Acting is reacting,” Cobb declares that “young American men of African descent, whether they voice it or not, have a great deal of external stimuli to react to, all the time.” As proof of this, he tells us that when an acting teacher gave an assignment to prepare a monologue from Shakespeare, he shot down all of Cobb’s initial choices and suggested he try Aaron the Moor from Titus Andronicus, or the Prince of Morocco from The Merchant of Venice, two of the few Black roles in Shakespeare. 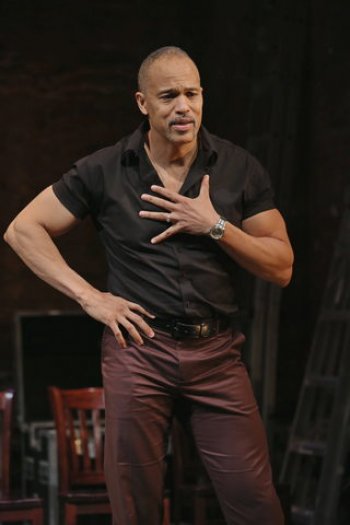 At this point a voice in the theater (played by Josh Tyson who we never see only hear) introduces himself as the young, white director Michael Aaron Miller. With three decades of experience on the stage, Cobb resents that the only question the director has for him is how tall he is, and predicts he will next say “What Shakespeare was trying to say here..,” which is exactly what happens as the director attempts to explain the role to a man who has lived many of the same experiences in America. This leads to Cobb’s problem with the American theater: “a little white man is asking me if I have any questions about being a large Black man, enacting the role of a large Black man in a famous Shakespeare play about a large Black man which for the last fifty, sixty years has been more or less wholly the province of large Black men.”

After Cobb beautifully performs Othello’s speech to the Venetian Senate, the director asks him to try it again and be more ingratiating, i.e. subservient. This leads to his meltdown where he explains to us that Othello “is the only large Black entity in the room,” something he knows a great about and “walking through the door, purely by virtue of being born Black in America, I know more about who this dude is than any graduate program could ever teach you.” These thoughts are addressed to us the audience, but at some point in analyzing the role of Othello from the inside out from the point of view of an American Black man who has had similar experiences, he voices his thoughts to the director, risking his chances to get the role. 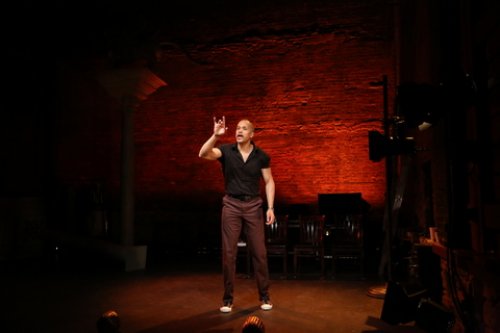 Cobb is titanic in this piece bringing his resonant voice and impressive physical presence to bear on the most famous classic role for a Black actor in the canon as well as his thoughts about race and the theater. His justifiable anger when the director tells an anecdote about a woman who drove across the country in diapers to confront her rival as an example of the effects of jealousy is enough to flay one alive. His analysis of the man Othello and his relationship to the white Venetians is a brilliant explication of both character and society. Cobb’s understandable problem with white directors who want to tell him how to play a Black man exposes race in America from a new point of view. American Moor may make you angry but it is always enlightening and right on target. Although Cobb’s passion gets the better of him, you will never feel that he has gone too far or misrepresented things as they are.

Directed by Kim Weild (a white woman), the staging keeps the pace moving so that one doesn’t really notice the time go by. Wilson Chin’s set offers a marble pillar and a winged statue of a lion (the symbol of Venice) for a suggestion of a conventional production of Shakespeare’s tragedy. Cobb’s casual rehearsal costume which serves to show his magnificent physical shape is the design of Dede Ayite. Alan c. Edwards’ lighting is always subtle and unobtrusive. Though we never get to see Tyson as the director until he comes up the aisle to the foot of the stage at the end of the play, we get a sense of him from his pronouncements from the center of the theater. Keith Hamilton Cobb’s American Moor is a tour de force performance which puts Shakespeare, race and America in a different perspective that is unforgettable once you have seen the play.