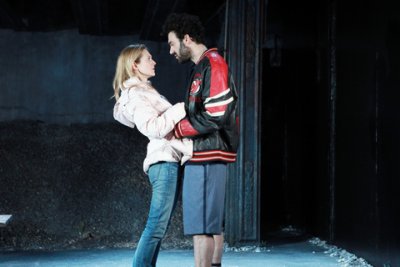 A bus stop outside of Elizabeth, New Jersey, might not seem like a particularly significant place for most people, but for one Polish immigrant woman named Darja, this otherwise nondescript bus stop served many times as the backdrop for moments of hardship in her life. Spanning Darja’s 20 years in Elizabeth, the New York premiere of Martyna Majok’s Ironbound is the story of Darja’s life as it unfolded in front of this bus stop, and the chance encounters that occurred there along the way.

Darja, the grounding force of the entire production, is played with rawness and vigor by Marin Ireland. Ms. Ireland—no stranger to the New York stage as of late—delivers an unnerving performance as a woman who has had no run of good luck in her time in America. Jumping in time between the early 1990’s, the year 2014, and stopping in the middle (2006) along the way, Ireland’s performance is riveting and heartfelt from beginning to end—no matter the decade.

When we first meet Darja, she is in the company of her current lover Tommy, a brassy and aggressive Morgan Spector sporting a New Jersey Devils track jacket and oversized, baggy jean shorts. In no way resembling a traditional relationship, Ireland’s Darja and Spector’s Tommy are seemingly at war with each other, drawn to one another just enough not to walk away but always toeing that same line. Tommy, accused of infidelity, is making his own case for the good things he has done for Darja, despite his promiscuous behavior. Neither of the two are willing to back down, resulting in Tommy driving away in his car, leaving Darja alone at the bus stop in the middle of the night.

The show flashes to 1992, where a much younger and less cynical Darja is found—at that same bus stop nonetheless—laughing and flirting with Josiah Bania as Maks, Darja’s one true love and eventual husband. Bania is a youthful and attractive male, bringing out a different side of Darja entirely. Together the two seem happy, a characteristic not to be found in Darja’s present day life. Bania and Ireland’s chemistry is palpable, and this youthful affection seen in Darja only deepens one’s sympathy for the character as she continues to fall through time. 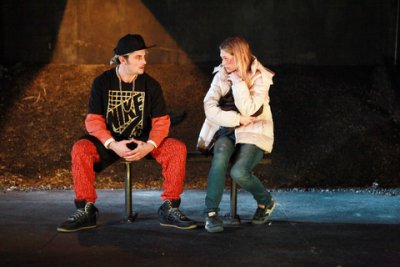 Eventually, Maks gets a new job in Chicago and has to leave Darja—now a mother to a young boy—on her own in New Jersey. While trying to raise a child all on her own, things for Darja take a turn for the worst. She finds herself out of work and homeless, sleeping out on the streets under the protection of that one constant in her life—the bus stop. This time in her life has her running into Vic, a threatening-looking Shiloh Fernandez who turns out to be more sympathetic than initially perceived. Fernandez’s Vic is a bizarre character of the night who works in a dark underworld, but beneath his shifty façade lies a big heart and a comforting friend. Though he only appears in Darja’s story briefly, Vic’s presence is one not so easily forgotten.

For the New York premiere of Ironbound, director Daniella Topol has procured truthful performances from her actors who drive the story from beginning to end. Working with a small cast of four, Topol’s production is peppered with private moments that reveal deep, glaring truths about the characters’ inner lives. The scenic and lighting design by Justin Townsend is simple—a bench placed center stage that represents the bus stop is the only major set piece—and it performs its duty in that it doesn’t distract from the performances at hand.

Ironbound is unsettling and unapologetic, and is most notably grounded by a visceral and electric performance from Marin Ireland. Though Majok’s latest is a mostly ominous tale, by the end there is the hopeful implication that our leading lady just might get the happy ending she always wanted.