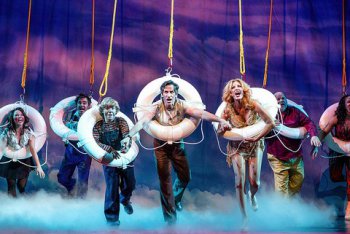 The off-Broadway, belly-laugh-filled musical, Disaster!, made the leap to Broadway in a posh production starring an A-list of musical theater veterans.  Perhaps, some of the “let’s-put-on-a-show” charm of the original has been lost in the transition, but watching these charmers giving their all in the service of Seth Rudetsky and Jack Plotnick’s wacky libretto is the ultimate in theatrical escapism.

Seth Rudetsky and Jack Plotnick’s libretto mocks all the famous disaster films of the seventies, like Jaws, Earthquake, The Poseidon Adventure, The Towering Inferno, Ben, etc., and squeezes every Bible worthy catastrophe onto the Nederlander stage, all the while using hit songs from the seventies, sung live, to punctuate the libretto with music that makes singing—and dancing—along difficult to avoid.

The action takes place on the opening day of a shoddily built floating gambling casino in the Hudson River run by Tony (a properly sleazy Roger Bart).  Beautiful lounge singer Jackie, (a daffily elegant Rachel York), hopes to marry the shady Tony after her stint in the casino’s cabaret.  She has brought along her twins, Ben and Lisa (both hilariously played by Baylee Littrell). 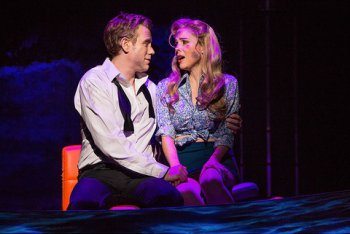 Meanwhile two cater waiters, Chad and Scott (macho Adam Pascal and nerdy Max Crumm), try to be smarmy womanizers with mixed success.  Chad is accidentally reunited with super-efficient reporter, Marianne (the wonderful Kerry Butler) who jilted Chad at the altar several years before.  Poor, bumbling Max never quite makes it with a “chick.”

Dour Dr. Ted (Mr. Rudetsky), a disaster specialist, warns all who will listen of impending doom from every calamity, including earthquakes and tidal waves.  He is, of course, ignored until his predictions come true, in spades. 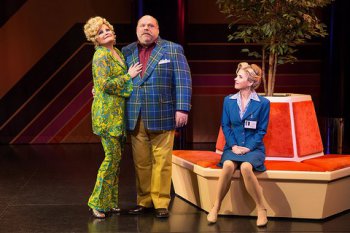 And, speaking of things Biblical, Sister Mary Downy (a stupendously deadpan, on target Jennifer Simard) is waylaid onto the boat where she has to confront her dark relationships with both God and one-armed bandits.

Also on board are the doomed middle class, Jewish couple, Shirley (a lusciously daffy Faith Prince) and her loving husband, Maury (Kevin Chamberlin who makes the most of an under-written part).  Adding to the mayhem is the stowaway, ex-disco-diva, Levora (a divine Lacretta Nicole) whose attempts at regaining her former glory are waylaid by her little puppy dog.

Choreographer JoAnn M. Hunter uses the seventies songs wittily and the director Jack Plotnick keeps thing going at a breakneck speed, aided by the posh scenery of Tobin Ost and the period and character perfect costumes by William Ivey Long.

Everyone on stage seemed to be having a ball, their infectious energy and good spirits contagious.