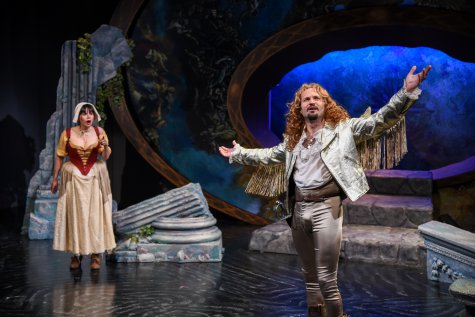 Rarely performed in English language countries, Moliere’s 1665 prose comedy Don Juan is considered a masterpiece in France. In any case, it is a very strange play with its first three acts comedic, and its last two leading up to tragedy. Its plot follows the legend closely except for the addition of Dona Elvira, the abandoned wife who does not appear in the original Tirso de Molina play in Spanish on which the story is based. Its title character may just be the first anti-hero in French drama, not only a seducer and a betrayer but also an atheist and a blasphemer. The original production was withdrawn after 15 performances due to the outcry over its anti-religious tendencies. The problems with the play today are somewhat different.

The Pearl Theatre Company’s express aim in reviving this curiosity according to translator Jess Burkle, responsible for this world premiere adaptation, is “to connect the experience of the play in the original French to American audiences in 2015.” Burkle’s method is to use “alliteration, idiom, and mixed metaphor” as “the key to getting us all to pay attention to Moliere’s glowing words.” Much of the problem with Hal Brooks’ production is that while all of the characters aside from Don Juan (who is clothed as a rock star) are dressed in 17th century costumes, the text is made up of contemporary language.

The continual use of excessive alliteration (“brings bonus benefits of benevolence,” “Doubtless my devilishly duplicitous departure,” “please parse these pleasant platitudes,” “Scrumptious Charlotte, surely such spotless splendor…,” “visual vapors that vexed our view,” etc., grows artificial and tedious. (Do people really speak like this?) While some of the characters speak in perfectly formal language, the text is also studded with contemporary expressions that stick out like the proverbial sore thumb: scum buckets, guesstimating, boys will be boys, syncopation, cockamamie, ten bucks, the pits, screws up, off putting, the guy, dress for success, etc. The bad puns addressed to the Stone Statue of the dead Commander (“we wouldn’t want to take your company for … granite,” “It’s enough to make you lose your marble!”) are obvious but not funny. Nor do the mixed metaphors like “You can lead a horse to water but you can’t change horses mid-stream” work as comedy. The line that received the biggest reaction at the performance under review dealt with Don Juan’s musing about his middle years, a truly preposterous remark. Unfortunately, nothing else in this adaptation came up to this mark.

Had the cast been dressed in some outrageously satirical costuming for the 17th century setting, this kind of comedy might have worked, but as all of the actors aside from Don Juan are dressed in period-accurate clothing, this modern language just seems anachronistic. Costume designer Anya Klepikov has dressed Don Juan in a silver leather jacket with fringe like a country western star and little wings on the shoulders, tight shiny silver pants with a codpiece that suggests a continual erection, a modern update on the traditional legend. However, as he is the only character dressed this way and the other characters do not react to his obviously contemporary costume, the visual joke doesn’t work.

In addition, attempting to perform the play’s 14 characters with six actors requires a certain amount of doubling. However, having a man play a woman (Chris Mixon as the country wench Mathurine) and a woman play a man (Jolly Abraham as Don Alonse) only adds to a confusion of styles. While part of the play is handled like a series of vaudeville sketches, other parts are staged as one would expect from a traditional Moliere comedy. Distracting still is that the rustic characters (Charlotte, Pierrot, Mathurine) are given so bizarre a dialect as to make it difficult to listen to their speech. It almost seems as if the director and the translator did not trust the original material and thought that it needed a good deal of doctoring to make it work for a contemporary audience but this halfway solution does not appear to be the way to do it. 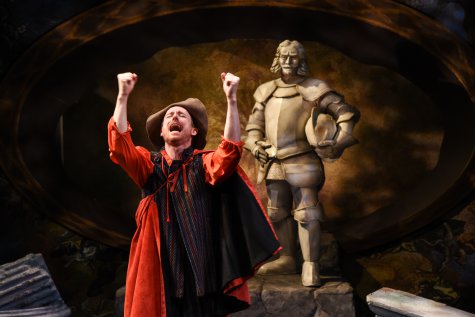 Brad Heberlee as Sganarelle and Chris Mixon as the Statue in a scene from the Pearl Theatre Company’s revival of Moliere’s “Don Juan” (Photo credit: Russ Rowland)

With his long golden ringlets, Justin Adams looks every inch the aging rock star. Unfortunately, there is no variety to his acting so that his Don Juan remains a very difficult protagonist to like. On the other hand, Brad Heberlee as his long-suffering servant Sganarelle uses so many different styles that it is difficult to keep up with him. Aside from the rustic characters played as comic foils, the rest of the characters are played fairly straight. Jolly Abraham is quite conventional as Donne Elvire, Don Juan’s castoff wife kidnapped from a convent, but  gives a comic turn as the hot-headed Don Alonse trying to defend his fallen sister’s honor.

Pete McElligott is more successful as the seemingly cowardly nobleman Don Carlos (Don Alonse’s brother) and again as the cowardly rustic Pierrot attempting to win Charlotte back from Don Juan. Playing five characters, Mixon is best as the scary Statue (in a costume that truly looks like it is made of stone) come back from the dead to get his revenge on Don Juan who has killed him in a duel. As Don Juan’s father Don Louis, the merchant Mr. Sabbath, and as Don Elvire’s servant Guzman, he is not sufficiently different to make these separate characters. His Mathurine in her peasant costume is more of a cross-dressing joke than anything else. Isabella Curtis as the peasant Charlotte who turns Don Juan’s head, the starving Beggar he meets in the forest, and his servant Violette gives able support in a traditional manner.

The setting by Harry Feiner which is used for all five of the play’s acts is a bit of a mystery. The front of stage is set with variously dilapidated Greek or Roman pillars. However, in the back is a circular mural in Renaissance style with an oval opening which at times looks like a skylight, but at other times is used as an entrance for the characters. Is the mural meant to suggest a mansion’s ceiling? It is never made clear. These disparate elements (none of which seem to be in the same play) are distracting for the play’s five locales. The sound design by Jane Shaw sounds Mozartian which only draws attention to the production’s mash-up of styles.

The Pearl Theatre Company is to be commended for attempting a play as difficult and as rarely staged as Moliere’s prose comedy Don Juan. Unfortunately, in seeking to make it relevant for a contemporary audience, it instead becomes a mixed bag of various tricks which do not help the play much or our enjoyment of it. The problem of the libertine protagonist still needs to be solved in some other way for the 21st century.