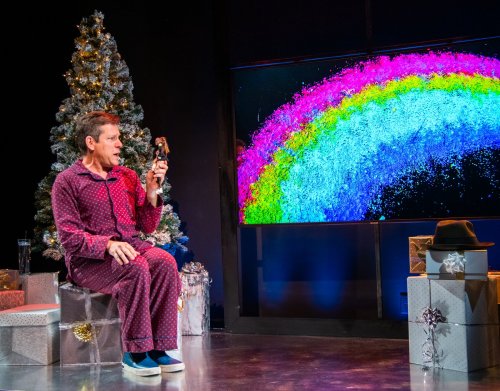 Christmas shows in New York City are as ubiquitous as piped-in holiday muzak, and The Santa Closet is just one of the many festive offerings available to fill your theatrical stocking this season.

Houses on the Moon Theater Company’s delightful and earnest mission is to “dispel ignorance and isolation through the theatrical amplification of unheard voices.” The Santa Closet, another one-man show written and performed by the company’s co-founder Jeffrey Solomon, doesn’t reach the lofty goals of some of his other plays; however, the newly updated, tenth-year anniversary production of this frothy, zany tale is nevertheless aloft with quite a few grins and chuckles.

As the buzzing audience files into its seats, it takes in the merry scenic design by Claire DeLiso, consisting of two Christmas trees (one inverted, as though in a sign of topsy-turvy things to come), video screens, and wrapped Christmas gifts as seats and staging platforms.

An announcement requesting that all phones be silenced and all candy canes be unwrapped occurs in tandem with Solomon’s entrance onto the stage in a pair of pajamas. Solomon’s penchant for playing multiple characters in his shows is in full force here, and he begins this play by donning a fedora and introducing himself as Sid, Santa Claus’ Jewish agent, hankering for a pastrami. He declares in his best Brooklynese that he’s about to tell us the true, previously untold story of Santa. 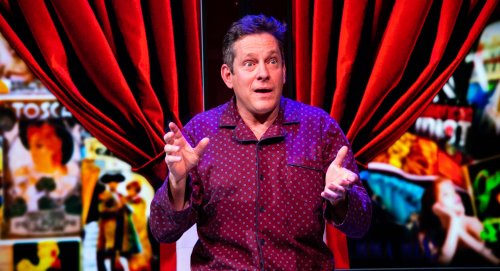 Solomon continues portraying each of the play’s many characters to tell the story. He first transforms into the young lad Gary, who has asked Santa for a “Sparkle Ann” doll. Then, as Gary’s mother Trish, he declares he doesn’t mind that Gary is “sensitive and artistic” and wears shower curtain rings as earrings, but as Gary’s father Frank he expresses no tolerance for Gary’s burgeoning, unspoken homosexuality at all. Frank refuses to give his son a doll for Christmas but says if Santa gives it to him, well, he can keep it.

As Pete, the elf foreman, questions the doll gift, and Santa Claus reluctantly concedes to giving Gary a truck for Christmas instead.

Gary’s bestie Cheyenne comes to Gary’s defense when he doesn’t get the doll he wants from Santa; Solomon’s portrayal of Cheyenne includes some cringe-worthy racial stereotypes, but the laughter from some women of color in the audience helped to ease the discomfort of watching this marginalized characterization at the performance under review.

Providing some further dimension to the story, Rudolph, the red-and-sometimes-lavender-nosed reindeer (pronouns he, him, his) speaks out in spite of Santa’s buckling to pressure over Gary’s gift:

I’m very proud of everything we have achieved here in Christmas-Town. In the early seventies we broke the color line and opened up the workshop to Elves of color. We put in access ramps throughout Santa’s workshop…and we brokered a deal with the chief Rabbis of the Reform movement in order to honor the requests of Jewish children without superseding Chanukah …But… I’d been pushing for us to adopt a more relaxed attitude towards gender and do away with the so-called “Soldier for Jimmy, Dolly for Sue” policy, this whole color-coded gender facism- let’s break up the binary, man. 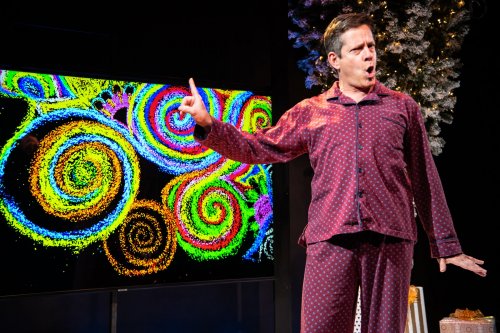 All hell breaks loose when Jose, a drag queen and gay man of a certain age, claims he was with Santa during the Stonewall Riots, and it’s revealed that this declaration led to the hiring of actress Beatrice Ponds (famed for her one-woman version of The Cherry Orchard) as Santa’s figurative “beard,” and thus relegating Santa’s lover Giovanni Gepetto, great-great-great-great-great grandson of Pinocchio, to the shadows.

Pressure from Mary Ellen Banfield, president of Families Against the Gay Agenda (FAGA), and the massive negative publicity of his being outed causes Santa to denounce his role as the legendary gift giver, and he and lover Giovanni fly away in Santa’s sleigh, never to be heard from again (except by way of Santa’s best-seller Santa Claus is Coming Out). There is much fury over Santa’s abdication, for and against, and his agent puts a button on it all when the mayhem dies down and the world grows accustomed to a Santa-less existence:

It’s a living, but I gotta’ confess I miss the old days… No, not Christmas, please. That’s the day I eat Chinese food, but what Santa stood for. You know what I’m talking about? Giving directly from the heart without expecting anything in return. Who’s going to do that now, you? Please, don’t bullshit me, darling, I’m an Agent.

The play concludes ten years later, when Gary, now identifying as the queer and non-binary Garen and who is going to prom with their boyfriend, writes a last letter to Santa:

Dear Santa Claus, it’s been awhile since we’ve talked…and I am not even sure where you are…but if you ever decide to go back to work, you still have a huge fan in Wisconsin….My parents don’t always understand, but they try. So we’re good. Happy. Which, is well, better than before. Anyhow, when you’re ready, you know where to find us, Santa Claus. We’re keeping the lights on for you.

Wearing nothing more than a man’s pajamas and sometimes a hat, Solomon portrays every one of the characters with only voices and physical traits to identify them. This acting feat is quite a marvel to behold, although with so many characters to play, some broader strokes and extreme accents are employed to ensure each character stands out from the other. A story with less incidental characters might have allowed more subtle nuances to define each personality, opting for quality characterization over quantity.

Clever and witty video projections designed by Yana Biryukova adorn the stage at perfect moments throughout the play, and the lighting design by Christopher Chambers skillfully aids in Solomon’s transitions between scenes and characters.

Amidst the laughs there are a few poignant moments like Garen’s final letter to Santa; however, they go by quickly. Joe Brancato and Emily Joy Weiner’s otherwise fine co-direction might have varied Solomon’s pacing during such subtle moments in order that they received more emphasis. All told, The Santa Closet is fluffy holiday fare, bringing rainbows and smiles for the Christmas season.

Houses on the Moon Theater Company