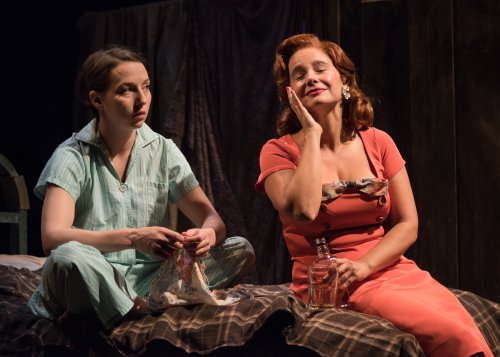 Rebekah Brockman and Rachel Botchan in a scene from The Pearl Theatre Company’s revival of “A Taste of Honey” (Photo credit: Russ Rowland)

When we think of the Angry Man movement in Britain in the late 1950’s, we usually think of such plays and movies as Look Back in Anger, Saturday Night and Sunday Morning, This Sporting Life, The Caretaker, Room at the Top, The Entertainer, all written by male authors. However, there was one woman who wrote in this kitchen sink genre/working class milieu, 18-year-old Shelagh Delaney whose claim to fame was the ground-breaking A Taste of Honey. Seen today in The Pearl Theater’s revival, the first in New York in 35 years, the play tackles a great many subjects that we take for granted today, but which were decidedly uncommon for the stage in 1958 when the play was first performed: dysfunctional families, single parents, unwed mothers, homosexuality, racism, feminism, and sexual liberation.

A Taste of Honey was reputedly inspired by a visit to a West End London theater to see Terence Rattigan’s Variations on a Theme, a modern update on Dumas’ The Lady of the Camellias. Delaney’s reaction to this admittedly weak play from one of the reigning British playwrights up until the advent of the Angry Young Men movement (which put him out of style) was that she could do better. Many of the same elements occur in both plays: a fraught relationship between a mother and a 17-year-old daughter, a female protagonist who has lived off rich men, a heroine with a much younger lover, a character with a chronic cold, problems with leading characters paying their bills, and a young man presumed to be gay by his acquaintances.

On the other hand, Rattigan is supposed to have replied that he could have written a better play about love among the working classes of Manchester, England, had he chosen to, though he continued to write mainly about upper class characters. In 2016 Delaney’s dramaturgy looks a bit creaky. Three of the play’s four scenes begin with two characters arriving at the heroine’s empty apartment, and the use of the on-stage jazz trio seems like a self-conscious Brechtian effect at this date. The snatches of song by the leading characters also seem to be an awkward distancing device. There is a good deal of intentional repetition in the dialogue which tends to become noticeable in the course of the play. Nevertheless, A Taste of Honey has the raw energy only seen in first plays by new authors and is still compelling. 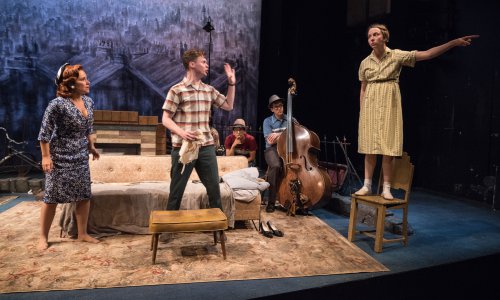 The play begins with Helen (described as a ‘semi-whore’ by the author, a lady of the camellias from a different social stratum) and her nearly 18-year-old daughter Jo moving into yet another shabby apartment in Salford, a derelict suburb of Manchester, in northern England, where Delaney had grown up. However, Helen’s latest fancy man, the much younger but well off Peter (meeting Jo for the first time) has followed them to the new digs and wants her to come away with him. Still in school, the rebellious, liberated and ungainly Jo has an adversarial relationship with her indifferent mother who keeps going off with men and leaving her on her own for long periods of time.

However, this Christmas, the gamin-like Jo has a boyfriend, a black sailor in the Royal Navy, who isn’t likely to remain in Manchester very long. Helen leaves to marry Peter before Jo, who has been looking for love in the most desperate way, finds out she is pregnant, but the sailor has left town. Jo takes up with Geoff, a sensitive art student, who is most likely gay, and they set up housekeeping together. When Helen (who has been living with Peter) gets wind of the situation, she returns to take a look for herself.

Director Austin Pendleton made some choices which don’t help the now creaky play. Although Peter is described as ten years younger than Helen, Pendleton has cast the ever-reliable Bradford Cover who unaccountably looks to be Helen’s age or older. This changes the dynamic of the play as with a younger man it would be obvious why Helen doesn’t think she has much hold over him. While the apartment is described as dirty with junk all over it, Harry Feiner’s set is spotlessly clean. This changes the environment a good deal and makes Jo’s life much less intolerable than described. In addition to the on-stage jazz combo which was also part of the original 1958 London production, Pendleton has several of the characters occasionally speak directly to the audience which makes this play more surreal than the kitchen sink milieu would imply. All of this makes the revival much less affecting than it might have been. 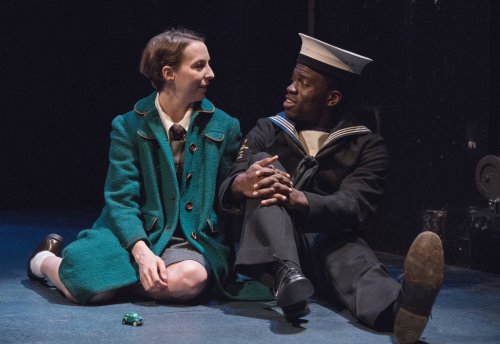 Rebekah Brockman and Ade Otukoya in a scene from The Pearl Theatre Company’s revival of “A Taste of Honey” (Photo credit: Russ Rowland)

The production is held together by the winning performance of Rebekah Brockman as the 18-year-old Jo, gawky and graceless, but very feisty and independent. Though she is just a child when we meet her, she is very much her own person. Slowly she begins to grow up right before our eyes in the nine months of the story. As Helen, Rachel Botchan makes a strong impression as a self-absorbed woman who always lands on her feet and has a way with the quick barbed dialogue. However, as dressed by Barbara A. Bell, she seems a bit too chic for the Salford environment and her Northern accent is much too posh for this working class community.

John Evans Reese gives a sensitive performance as the high-strung, nervous Geoff who is willing to look after Jo and take on her responsibilities but can’t fight Helen. Ade Otukoya as Jimmy, Jo’s sailor boyfriend, has the decided appeal of the exotic stranger who knows the wide world which is still a mystery to Jo. While Cover is fine as the possessive, drunken lout who has turned Helen’s head, he is unable to give him the callowness of youth. The jazz trio made up of Max Boiko (trumpet), Phil Faconti (guitar) and Walter Stinson (bass) acquit themselves well as musicians but they don’t add much to the play as they look bored at all times and are often badly placed by Pendleton so that they are unfortunately seen in the way of the main characters.

A Taste of Honey’s assortment of many adult themes makes this 75-year-old play still worthy of our attention. The Pearl Theatre Company’s revival directed by Austin Pendleton dilutes its effectiveness with a series of intrusive choices. However, Rebekah Brockman’s breakout performance as the 18-year-old Jo makes this a compelling evening nevertheless.

A Taste of Honey (extended through October 30, 2016, in repertory with Public Enemy)