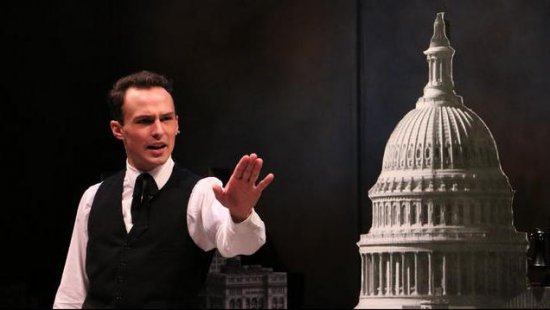 Since Hamilton carried off the Pulitzer Prize for Drama earlier this year it was inevitable that someone would think to revive that earlier Pulitzer Prize-winning musical about another New York political hero, Mayor LaGuardia, affectionately known as “The Little Flower.” The first full scale New York revival and the first Off Broadway production ever, The Berkshire Theatre Group’s staging of the Bock & Harnick musical, Fiorello!, has moved to New York’s East 13th Street Theater from Stockbridge, Massachusetts. This delightful production proves that not only is this rarely revived show still fresh and witty, but that with its young and vital cast, it is still a captivating, heartwarming evening in the theater.

While Austin Scott Lombardi does not look much like the diminutive roly-poly lawyer and politician who became a NYC hero, he is as much a bundle of energy as Tom Bosley (Broadway, 1962, heard on the original cast album), Jerry Zaks and Danny Rutigliano (New York City Encores! 1994 and 2013) who preceded him in the role.

The entertaining and spirited book of the musical, a collaboration between novelist Jerome Weidman and director George Abbott, tells the story of two episodes in the early life of one of New York’s most popular mayors, Fiorello H. La Guardia, a man of incorruptible integrity, who made many enemies with his overweening ego, domineering personality and lack of tact. The show begins in 1945 with the mayor reading the comics over the radio due to a newspaper strike. This causes him to reminisce about his early career. We then flashback to 1915 when Greenwich Village lawyer La Guardia decides to run for Congress as a Republican in the Tammany Hall dominated 14th district of Manhattan in order to fight policemen on the take, long entrenched political hacks, and corrupt courts. 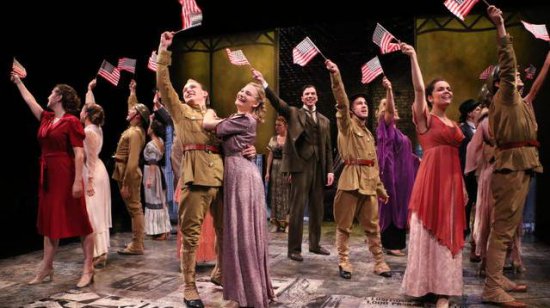 With the help of Republican party boss Ben Marino, used to losing in this district, and Fiorello’s loyal office team made up of Morris, Neil and his secretary Marie who is secretly in love with him, he wins the election by a landslide, appealing to all the segments of the population, particularly the Italian and Jewish vote. Along the way he bails out sweatshop union organizer Thea Almeragotti and falls in love with her. A staunch believer in helping the Allied forces in World War I, he enlists in the Air Force and leaves for Europe. Act I ends when he returns a hero from the Italian front. The second act, which picks up ten years after the war is over, follows his first two attempts to become mayor of New York, the one in which he was unsuccessful against the popular but corrupt James J. Walker and the one in which he won the first of his three terms.

Although the score does not feature songs that became famous outside of the show, there are many treasures in this bouncy and witty second Bock and Harnick collaboration. The political satire is pungent in such songs as “Politics and Poker,” “Little Tin Box” and “The Bum Won.”  “Marie’s Law,” “I Love a Cop,” and “The Very Next Man” are clever anti-romantic love songs. The haunting ballads “Till Tomorrow” and “When Did I Fall in Love?” ought to be better known and heard more often. “Gentleman Jimmy” is a toe-tapping pastiche of production numbers from the 1930’s, while the show’s anthems “On the Side of the Angels” and “The Name’s LaGuardia,” which both sport many different verses, are rousing and high-spirited. The current production has been neatly trimmed down from the 42 actors the show was written for by lyricist Sheldon Harnick, the only surviving member of the original writing team.

Under Bob Moss’ vigorous and energetic direction, the cast of 20 young actors grab hold of the show and never let up for a moment playing a multitude of colorful New York types with energy and verve. The musical numbers are excitingly staged with excellent period choreography by Michael Callahan. In the title role, Austin Scott Lombardi, making his Off Broadway debut, is a forceful and charismatic presence as the lawyer who is always on the right side of every issue and never takes no for an answer. As his love interest Thea, the beautiful Italian American from Trieste, Rebecca Brudner is a charming presence, impressively maintaining her Italian accent even during her musical numbers. Katie Birenboim obtains our sympathy as Fiorello’s long-suffering secretary with her wry view of the world. Chelsea Cree Groen and Dan Cassin are an engaging if unlikely romantic couple as the savvy sweatshop seamstress and the dim-witted cop who arrests her best friend for picketing. 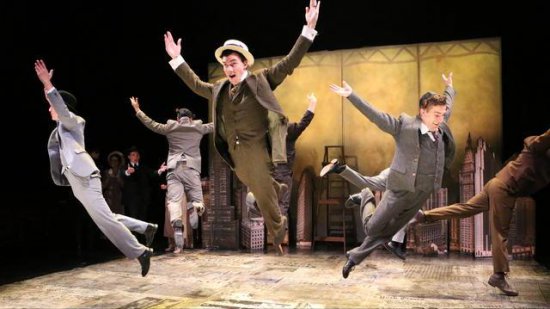 Matt McLean makes Fiorello’s office manager Morris a convincingly world-weary presence, as well as a hen-pecked husband, while Michael Sullivan is amusing as Neil, the wide-eyed switchboard operator. As Republican neighborhood political party boss Ben Marino, Rylan Morsbach is a shrewd steward of public opinion. Seen briefly, Maureen Glessner is dynamic as Broadway star Mitzi Travers in her “Gentleman Jimmy” production number. Ana Lovric stands out in the large cast at Mrs. Pomerantz, an Italian American member of Fiorello’s constituency who trusts his ability to right all wrongs. Under the musical direction of Evan Zavada (also on Keyboard 1 along with musicians Alev Gökçe Erem on violin and Robert Frost on Keybord 2), the singing is glorious. Credit David Alan Stern with various and convincing New York accents, including Lombardi’s Italian and Yiddish.

Carl Sprague’s witty unit set features cutouts of New York’s most iconic buildings from the early part of the twentieth century. The attractive costumes by David Murin cover both the pre-World War I era in the first act as well as the Great Depression in the musical’s second act. Matthew E. Adelson’s lighting design cleverly turns the New York miniatures various colors for appropriate mood changes. Fiorello! is the fourth Bock & Harnick show to be revived in the past 12 months including Fiddler on the Roof and She Loves Me on Broadway, and Rothschild & Sons in its revived version for Off Broadway. This engaging and cheerful production of the Tony Award and Pulitzer Prize winning Fiorello! is another reminder of how talented these collaborators were.