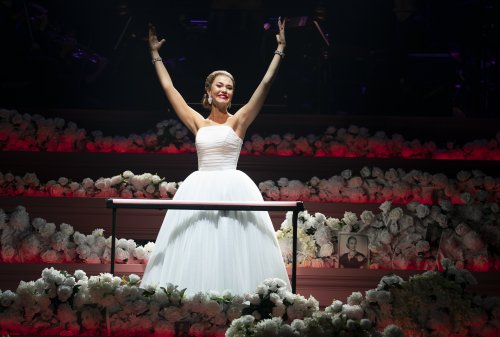 Abandoning elaborate scenery and projections for her spirited deconstruction of Evita, director Sammi Cannold still conjures up theatrical magic. Ms. Cannold’s exhilarating and fresh take on composer Andrew Lloyd Webber and lyricist and librettist Tim Rice’s classic rock opera is fast-paced, dynamically performed and visually stimulating. “You Must Love Me,” the Oscar-winning original song written for the 1996 film adaptation which was sung by Madonna is included.

This ingenious minimalist spectacle is steeped in native authenticity, transcending the flat 2012 Broadway revival that starred Elena Roger and Ricky Martin. For those who experienced the original production, Cannold’s radically different vision is as accomplished and artistically valid as Harold Prince’s. Cited as a member of this year’s Forbes Magazine’s “30 Under 30 in Hollywood & Entertainment,” Cannold who is in her mid-20’s, emerges here as a major force in the theater.

The back wall of the bare stage is structured as a series of arched-entranceways adorned with small light bulbs, vividly changing colors. Up above and on view is the 24-piece orchestra led by music director Kristen Blodgette. A wheeled staircase is periodically manipulated by cast members, transporting us to various locations.

“A New Argentina” zooms through space and time depicting Eva and Juan Peron’s rise in Argentina with the support of disenfranchised crowds and is the first act’s electrifying finale. “Perón’s Latest Flame” has snooty aristocrats pushing around clothing racks hanging with opulent finery in differing formations. “The Art of the Possible” ’s witty musical chairs allegory becomes a chilling exhibition as the cunning soldiers move with menace in shadows wearing gray Nazi-style uniforms.

“Requiem” employs a wild floral motif inspired by Eva Perón’s funeral. The stage is covered in white flowers in large planter boxes  which later rise and frame the stage in flowers. “Don’t Cry for Me Argentina” has Eva on an arrangement of the planter boxes resembling the steps to a classical building. During “Rainbow High,” courtiers hold up and move around large caricatures of Cleopatra, Queen Elizabeth I and Lauren Bacall. “I’m their savior, that’s what they call me, So Lauren Bacall me…” Indeed! This sequence evolves into a thrilling montage showing Eva’s whirlwind European tour.

Less successful of Cannold’s usually inspired flourishes and devices is the novelty of having two actresses play Eva. The debatable rationale for this is that at the start of the show she is 15-years-old and having a performer of roughly that age makes a statement about the unsettling aspect of the character having sex with men much older than her. The young Eva later reappears several times to silently commune with the older. Arguably this is an unnecessary distraction, but it doesn’t mar the piece’s impact, we take it in stride as an experimental flub amidst so much achievement. For the first 25 minutes, the talented and charming Maia Reficco diligently plays the young Eva to modest effect. 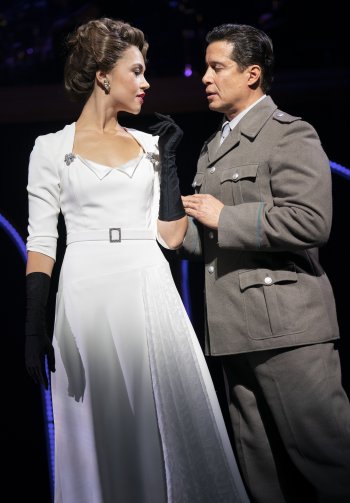 Then the show is jolted as glamourous, magnetic and fierce Solea Pfeiffer with upswept blonde hair takes over as Eva. Ms. Pfeiffer’s star quality is palpable, and her titanic vocal abilities allow her to sail through the notoriously difficult score with seeming effortlessness. Pfeiffer delivers a grand musical theater performance, making this an Evita with a great Evita, in a league with Broadway’s first, Patti LuPone.

Wearing all-black, the sleek, sensuous and youthful Jason Gotay is a charismatic Che who has the realistic essence of being from the mob of protesters. Possessed of an amazing tenor voice that lands every high note with ease, the beaming Mr. Gotay is commanding as the cynical narrator. Cannold omits any inferences to Che Guevara as there were in past incarnations, and so here he is simply symbolic of the people of Argentina.

Having a Latin presence informs and magnifies the suave Enrique Acevedo’s winning portrayal of Juan Perón. Mr. Acevedo conveys cold pragmatism and sunny devilishness throughout. Particularly effective is his smooth delivery during “A New Argentina.” 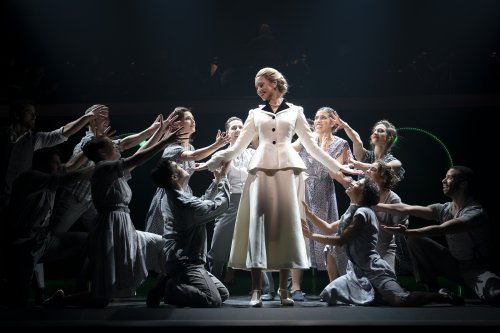 Philip Hernández gloriously croons and bring pathos to the role of Magaldi, Eva’s discarded first paramour. The forlorn Maria Cristina Slye sings a haunting “Another Suitcase in Another Hall” as Perón’s mistress.

Cannold’s tremendous physical staging is complemented by the plentiful and assured dances of co-choreographers Emily Maltby and Valeria Solomonoff. Artfully combined are snazzy tango moves with soaring jumps and twists out of Jerome Robbins. A neat bit is the soldiers striding about and extending their legs while caressing their rifles. Ms. Maltby and Ms. Solomonoff’s striking sequences are enacted by the large and terrific ensemble. 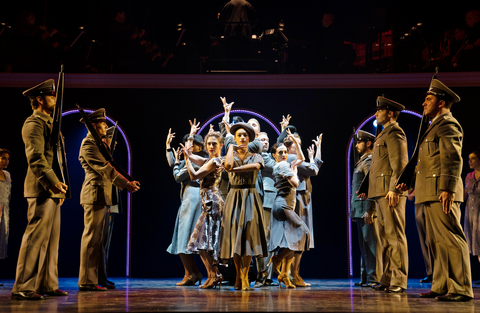 A fantasia based on the life of Eva Perón (1919-1952) who rose from poverty to become Argentina’s first lady after marrying general and eventual dictator Juan Perón, Evita was released as a concept album in 1976. Mr. Rice’s conceit was an audacious landmark in that it celebrated a controversial celebrity. Mr. Webber’s thunderous diverse score was a supreme unison of pop, rock and musical theater.