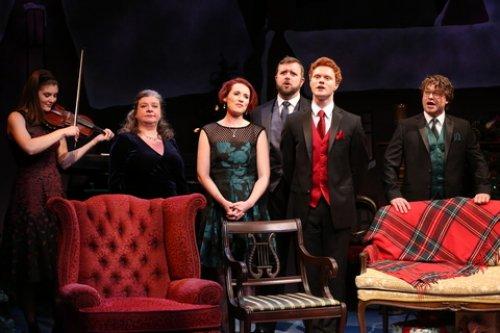 Every year, those of us who celebrate Christmas—along with those of us who don’t—find ourselves hitched up to some kind of time machine. Suddenly, there in our soundscapes, are reminders of Christmases past, including ones we never actually lived through. This year, kids whose parents have no memories of Bing Crosby, Burl Ives or Gene Autry as living people will hear their voices on television or wafting through stores and restaurants. And they’ll enter those voices in their memory banks, just as previous generations did.

It’s far from earth-shattering, this notion that Christmas may be perceived at least in part through the lens of collective memory. But memory, collective or otherwise, can sometimes prove faulty. That’s something Welsh poet Dylan Thomas recognized in “A Child’s Christmas in Wales,” a 1952 prose piece, recorded for radio, that morphed into a 1954 book. The narrator of the piece claims that he doesn’t quite recall “whether it snowed for six days and six nights when I was twelve or whether it snowed for twelve days and twelve nights when I was six.” 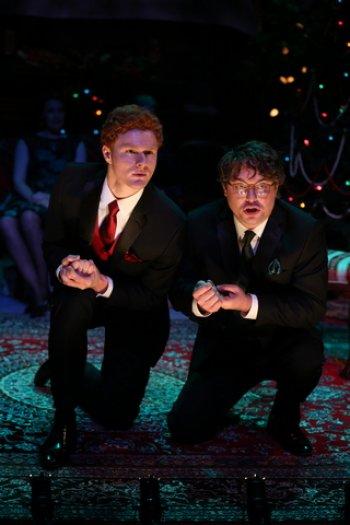 Nicholas Barasch and Ashley Robinson in a scene from the Irish Rep’s 2018 production of “A Child’s Christmas in Wales” (Photo credit: Carol Rosegg)

Still, we need to remember. Charlotte Moore, Irish Repertory Theatre’s artistic director, stresses our reliance on holiday nostalgia and tradition in her adaptation of Thomas’ piece, which is staged every few years by the company. (Moore has directed the current version.) The six characters who recall the Christmases that Thomas remembered keep insisting on how important it is that each Christmas be identical to the one before.

That such a demand becomes increasingly difficult to meet as one grows older is perhaps the sole bittersweet note in a production that is otherwise upbeat, celebratory and free of any significant dramatic conflict. Nothing really life-changing happens in the play. Children play in the snow, presents are shared, dinner is served, the uncles smoke cigars, ghost stories are told, and Aunt Hannah spikes her tea with rum. That’s about the gist of it.

The six actor-singers in the show portray people from our own era. Costume designer Barbara A. Bell dresses them in contemporary clothes: the men in tuxes with different-colored vests, the women in fashionable party dresses. James Morgan’s scenic design, on the other hand, gives us Christmas as it’s depicted in the homiest of old-timey Christmas cards. It’s simultaneously an exterior and interior set, with gingerbread-like houses looming over a comfy Grandma-and-Grandpa-ish parlor. The fireplace seems to be fused to the landscape. 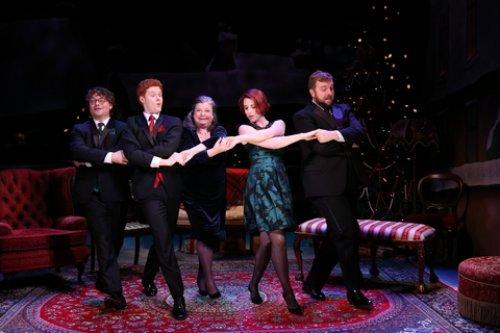 It’s a very presentational show. The six ensemble members comprise a sort of group narrator, working in tandem to relate the memories of the Thomas character for the audience—sometimes sorting out how it all really happened and sometimes taking on the roles of characters from the memories. Nicholas Barasch plays wide-eyed “Dylan,” who is totally swept up in holiday magic. Naomi Louisa O’Connell is his mother and Dewey Caddell his father. Extended family and friends are played by Margaret Dudasik, Polly McKie and Ashley Robinson.

In some ways, the piece is as much a musical recital as a play. It’s filled with song: traditional carols and Welsh airs, as well as more recent compositions (some penned by Moore). Each cast member gets at least a couple of good solo spots—with Barasch and O’Connell perhaps making the best impressions, musically speaking. But the group numbers—especially the ones in round and quasi-madrigal style—are among the most enjoyable. Musical director John Bell accompanies it all on the upstage piano. He also provides a lovely overture, with slight hints of a jazz sound at points. Dudasik makes the score fuller at times with her violin playing. There is also some dancing in the piece (jigs and the like), though no choreographer is credited.

It’s not for the theatergoer who wants a strong narrative. But it’s all very nicely done—elegant and comforting. And it might work just as well, or maybe better, if the casting were a bit more diverse. If it’s indeed the case that all who celebrate the holiday share a communal longing for some quintessential version of Christmas, it wouldn’t be such a stretch to have, say, a young black actor take on the Dylan role or a woman of Asian descent portray the tippling Aunt Hannah. After all, we’ve already got multiculturalism in gear with an Irish-American theater company celebrating the work of a Welsh writer.