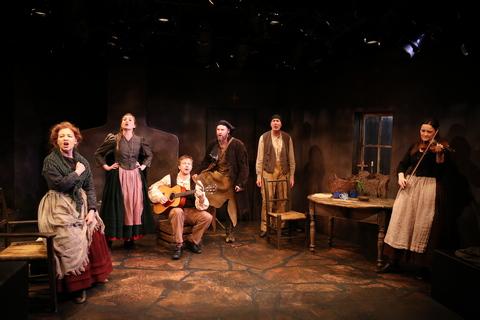 It’s impossible to discuss the history of modern Irish drama without reference to William Butler Yeats, Lady Gregory, and John Millington Synge, who, at the beginning of the last century, helped to found the National Theatre of Ireland. With Three Small Irish Masterpieces, this literary trinity receives a heartfelt, if somewhat exaggerated, nod from the Irish Repertory Theatre, which, over the last few decades, has proven its own indispensability, too.

In truth, only the much better known Synge offering, Riders to the Sea, could rightly be called a masterpiece, though Lady Gregory’s The Rising of the Moon comes very close to earning this accolade as well. As for the equally obscure The Pot of Broth, which Yeats wrote in collaboration with Lady Gregory, it’s by far the lightest of the three works, both in tone and content. While it’s entertaining enough to hold your attention for its brief running time, calling it a masterpiece is, at best, a tribute to good old-fashioned Irish hyperbole. 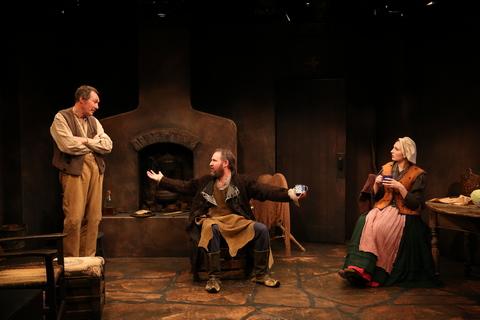 Colin Lane, David O’Hara and Clare O’Malley in a scene from “The Pot of Broth” by William Butler Yeats in collaboration with Lady Gregory (Photo credit: Carol Rosegg)

After a lovely musical preface from her impressively versatile cast, director Charlotte Moore leads off with Yeats and his comedic tale about a tramp (David O’Hara) who tricks a gullible peasant couple (Colin Lane and Clare O’Malley) out of their supper using a stone. O’Hara is wonderful as he delivers his character’s blarney with quick-witted and shameless conviction. But because the husband and wife are such drips, the outcome is never really in doubt, and, so the tramp’s ever-increasing duplicity feels like overkill.

More problematically, while the husband is essentially a blameless cipher, Yeats thoroughly stacks the emotional deck against the wife. In a soliloquy, the tramp castigates her as a renowned miser who “would skin a flea for its hide,” foreshadowing an overdrawn comeuppance that’s difficult to enjoy, because who wants to root against a peasant? Some critics believe that The Pot of Broth is actually an oblique satire aimed squarely at the British, but, if so, it’s a muddled one. 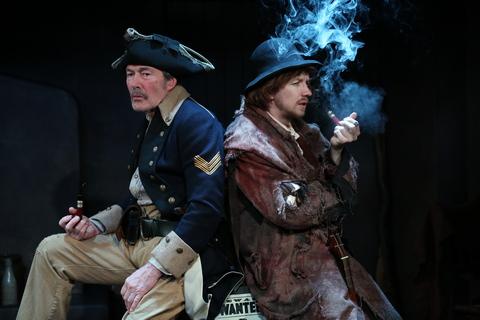 Britannia is a much more obvious preoccupation in Lady Gregory’s solo effort, a noirish gem about a late eighteenth century Irish sergeant (Lane), under the Crown’s command, who is tasked with staking out a harbor expected to be an Irish rebel’s point of escape. His watchfulness, however, is continuously interrupted by “a ragged man” (Adam Petherbridge) with a fondness for teary-eyed ballads and chit-chat. As the hour grows later, their banal exchanges become laced with suspicion and deceit that eventually gives way to soul-churning truths.

You can likely guess a major one, but that doesn’t matter. Under Moore’s sure-handed guidance, The Rising of the Moon is not about what happens but, instead, why it happens. Aided tremendously by Michael Gottlieb’s claustrophobic lighting, James Morgan’s catch-all set is shrunk down to a wooden barrel, on which the soldier and putative balladeer wage a verbal battle between duty and conscience. It’s a testament to the skill of all involved that the resolution leaves us satisfyingly in the dark. 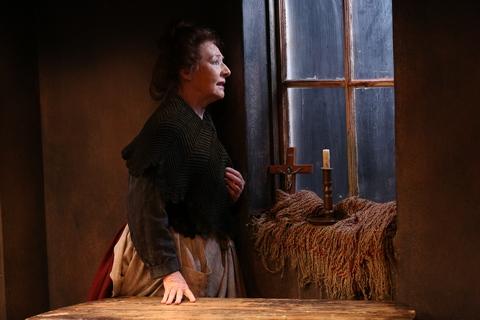 Finally, there is Synge anchoring the Irish Rep’s theatrical triptych with his remarkably condensed tragedy about a poor Inishmaan family slowly being destroyed by two worlds: the natural one that’s supposed to sustain them and the spiritual one that’s supposed to protect them. The talents of Moore’s actors and crew are all put to good use in this emotionally devastating story, as a widow (Terry Donnelly), who has lost four of her sons to the sea, reckons with the possibility that she may have just lost another one.

After receiving a bundle of clothes that washed up on the Irish mainland and could belong to their missing brother, the widow’s two daughters (O’Malley and Jennifer McVey) fret over whether to tell their mother the potentially grim news. Though, in truth, nothing really needs to be said, since experience has taught this beleaguered family that suffering is always a foregone conclusion, despite the crucifix above the door. To cruelly reinforce the lesson, the last son in the house (Petherbridge) is himself about to sail off, against his mother’s wishes, and you don’t need an ominous vision to figure out how that will turn out. But, of course, mom still receives one. 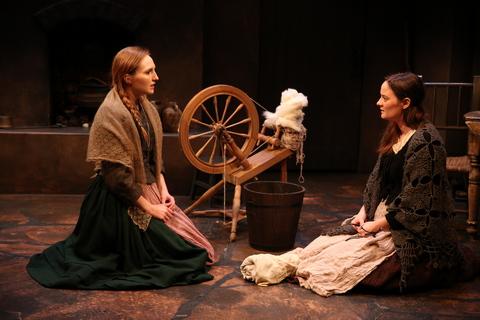 With this last play, the production team achieves a particularly haunting verisimilitude as Morgan’s humble cottage and Gottlieb’s evanescent lighting tear at your heart before a single word is spoken. And, as in the other two works, it seems as if Linda Fisher has somehow managed to pull her costumes directly out of a history book.

Occasionally, Synge’s poetic language gets lost amid all of the abject misery his characters endure. But the actors, especially Donnelly, make sure we hear most of the touching beauty nestled between the wails.

Running time: one hour and fifteen minutes with no intermission