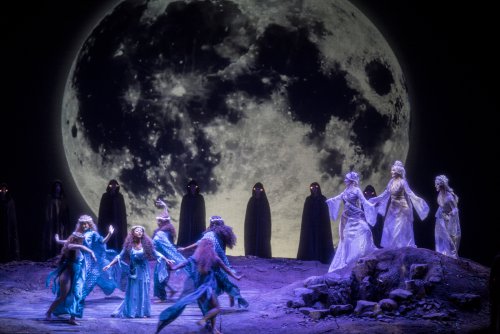 Ottorino Respighi is best known here for his frequently played, colorful orchestral tone poems The Pines of Rome, The Fountains of Rome and Roman Festivals.  The New York City Opera’s production of his opera La Campana Sommersa gave New York audiences a fine opportunity to experience a different side of Respighi’s artistic oeuvre, one in which he exploited his ability to paint images and evoke moods with his music.  Although his skillful use of the orchestra is still evident, this opera’s score is uneven, one that seems to take its inspiration from too many diverse sources such as Wagner, Puccini, with even a touch of the twelve-toners.

Based on a 1896 Gerhart Hauptmann play, Die Versunkene Glocke, itself based on various versions of this dark fairytale, La Campana Sommersa (libretto by Claudio Guastalla) is a fantastical rumination on loss and obsession cloaked in the form of a colorful folk tale that includes elves, fauns, fairies, witches and even a few mortals.

The story, with its clashing of the mundane and the otherworldly, has a long history in literature and the performing arts.  Think Andersen’s bittersweet The Little Mermaid, Dvorak’s fantastical Russalka and Ashton’s wondrous ballet Ondine.

The title in English is The Sunken Bell, referring to an ill-fated church bell that is destroyed by a mythic creature, a Faun, (Glenn Seven Allen, a charismatic stage presence, even under tons of makeup) in cahoots with the misshapen Ondino (boldly and unabashedly sung by baritone Michael Chioldi), both of whom hate churches and particularly their bells which they think are sullying the beautiful countryside in which they live with their fellow fairytale creatures. 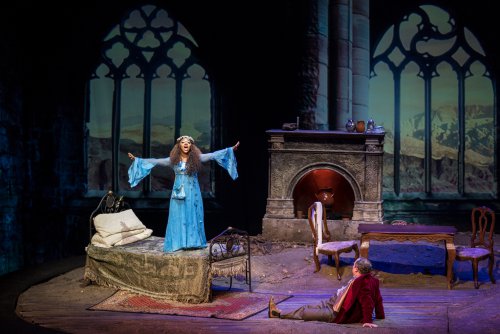 Among them is the beautiful elf, Rautendelein (soprano Brandie Sutton whose voice and acting went from tentative to a warm and remarkably moving interpretation of a half-woman caught up in obsessive passion), who is the object of Ondino’s affection.

The maker of the bell, Enrico, sung heroically by tenor Marc Heller (pinch-hitting for scheduled Fabio Armiliato who was indisposed) is first discovered suffering from an injury incurred during the demise and sinking of his beloved creation.  Rautendelein, overwhelmed with compassion, cares for him until he is returned to his hometown by his friends.

From thereon, the plot unwinds in true Romantic fashion in which the meeting of the natural and spiritual worlds always leads to disaster (as in ballets where sylphides and willis die when deceived by humans).

Rautendelein, mooning after Enrico, joins him and his wife Magda (Kristin Sampson, in a passionate, moving performance) in their hometown, disguised as a mute villager to care for the wounded bell-maker, curing and running off with him, much to the disgrace of poor Magda.  Things spiral downward tragically resulting in deaths, a forced marriage, shame and grief all around. 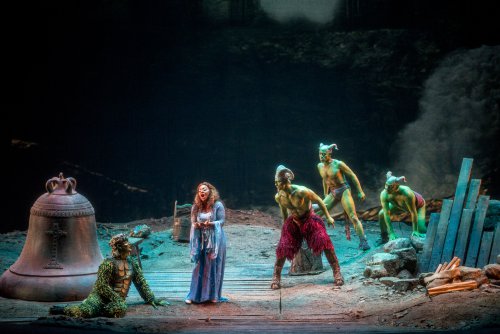 Other minor characters registered well.  Renata Lamanda as a Witch who helped Enrico made the most of her small scene at the end.  Philip Cokorinos was totally convincing as a priest who failed to squelch the passion between Enrico and Rautendelein.   The dancing, though simple, stirred up colorful images of the mystical dwellers of the glen.

Marco Nateri’s costumes were exquisitely and equally right for the poor townspeople and the imaginative forest elves and fauns.

This production was a co-effort with Fondazione Teatro Lirico di Cagliari whose orchestra joined forces with the New York City Opera Orchestra under the baton of Ira Levin who brought out every bit of color in the music.  Maestro Levin was sensitive to the needs of the singers, knowing just how to mold the orchestra’s sounds so that their voices soared over the often over-orchestrated score (not helped by the wrong-headed scrim used in the forest scenes).

The New York City Opera is again making its presence felt in the New York City music world and beyond.  Even if this season has been a bit uneven, the total dedication to presenting a difficult art form in its full expressive potency is what counts.  This current season will include a concert series and productions of such new operas as Angels in America (Péter Eötvös/Tony Kushner), Fallujah (Tobin Stokes) and Los Elementos (Antoni de Literes).

Running time:  two hours and 40 minutes including one intermission