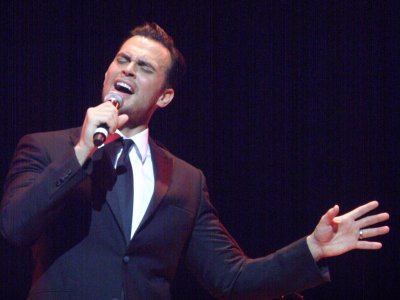 “Your Song,” dedicated to his husband of two years, was a dramatic highlight of Cheyenne Jackson’s eclectic concert at The Town Hall.  His distinctive, soaring voice richly realized that Elton John classic.

Entering the stage resplendent in an elegant white dinner jacket, bow tie, and black trousers, Mr. Jackson instantly confirmed the vocal talent that has been the hallmark of his career with his opening number, “Stand By Me.”

“It’s been a rough two years,” Mr. Jackson observed. Deaths in his family, a disintegrating romantic relationship, and becoming sober were all detailed during his heavily autobiographical patter that was integral to this presentation.  This quirkily handsome Broadway performer dazzled his fans with a variety of songs and personal anecdotes during this 95 minute presentation.  Being openly gay has been characteristic of his career and this fact was expressed simply during his commentary.

“Like all 13-year-old boys I was obsessed with the leading ladies of jazz,” he joked in paying homage to Ella Fitzgerald with a delightful rendition of “A Foggy Day.”  Other standards included a soulful “Bésame Mucho,” and a stirring mashup of “I Get Along Without You Very Well” and “Don’t Get Around Much Anymore.”  Mellow numbers included “Falling Slowly” from Once and Joni Mitchel’s “A Case of You.” 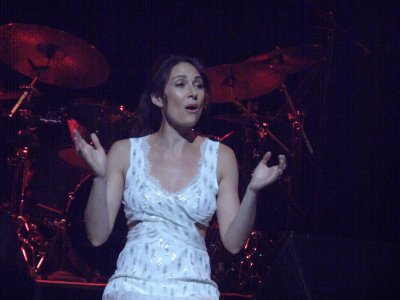 “ ‘We had running water after five years,’ my mother likes to correct me,” Jackson said in describing his poverty stricken upbringing in rural Washington.  Reminisicing about his beloved grandmother who had a fondess for alcohol led to a song funny and moving song about red wine that he wrote himself.

There was no theater where he grew up and so he created his own theater in the woods with his brothers where they pretended to be superheroes.  “Of course, I was Wonder Woman.”  Seeing a production of Les Misérables while in high school inspired thoughts of performing.

The aftermath of 9/11 instigated soul-searching, and he quit his advertsing agency job and moved to New York City at the age of 27 to pursue his dream of being a performer.  There, with contacts from friend and fellow performer Marc Kudisch, he got an auditon for and then a part in Thoroughly Modern Millie, in 2002.  The lead in the 2005 Elvis Presley jukebox musical, All Shook Up followed.  He performed a rocking Elvis Presley medley of “Follow That Dream,” “Your Teddy Bear,” and “Can’t Help Fallin’ In Love With You.”

“I want to do a duet with him!” Jackson declared before performing a wistful version of George Michael’s “Kissing a Fool.”  He is soon heading to Los Angeles to begin filming a leading role in the television series American Horror Story.  His co-stars will include Lady Gaga, and he did a spirited version of her song, “Edge of Glory.”

Jackson’s good friend Laura Benanti made a brief special appearance.  She joked with the audience and sang “A Quiet Thing” (from Kander and Ebb’s Flora, The Red Menace), a cappella while sitting at the lip of the stage.

Her appearance gave him off-stage time to change into a black jacket. After analyzing why the 2009 revival of Finian’s Rainbow that he starred in flopped (“The plot!”), he sang a wonderful “Old Devil Moon.”  Moderate audience participation was a feature of the night with fans calling out remarks to Jackson.

There was also a great deal of comical interplay with the accomplished 26-year-old musical director Willy Beaman who was on piano.  Beaman led the excellent band that included Vancil Cooper on drums, Michael O’Brien on bass and Steve Bargonetti on guitar.

Having recently toured with three different programs, this concert was composed of his favorite numbers Jackson explained.  It was also a monumental event for him.  He turns 40 next month and with his televison career ascendent this will be his last such event for the forseable future.  “I’m feeling good,” he stated emotionally as the show concluded.  Following a groundswell of applause, he returned for a rousing encore of Sam Cooke’s “A Change Is Gonna Come.”