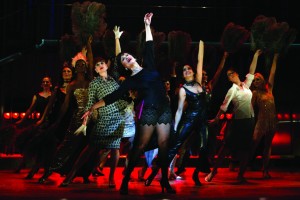 The Roundabout Theater is all about reviving and hopefully revitalizing classics of the American Theater. Let’s give it a 9.5 for this first Broadway remounting of “Nine.” Although it has only been twenty-one years since “Nine” first appeared on Broadway, this overtly sensual musical proves intoxicating enough to have inspired its director David Leveaux. Leveaux, whose direction of “Electra” starring Zoe Wanamaker excited Princeton’s McCarter Theater audiences, has, with this his first musical effort, not attempted to mimic the more dazzling but also more self-conscious artiness that marked Tommy Tune’s original direction. His staging is, nevertheless, quite effective on its own terms and probably more accessible than was the first production.

The 1982 Tony Award-winning musical, inspired by Federico Fellini’s autobiographical film “8 1/2,” has as its most unique asset, a surrealistically conceptualized mise en scene, a landscape filled with lusty and luscious women, and a melodic, full-bodied score with operatic pretensions by Maury Yeston (“Grand Hotel,” “Titanic”). To Leveaux’ credit, “Nine,” with its psychologically propelled episodic book about a director’s mid-life crises by Mario Fratti and Arthur Kopit seems much less confusing than it was before. Its numerous flashbacks, stream of consciousness affectations, and fantastical postures are still quite impressive but they no longer seem to be drifting about in the vapors of a Venetian spa. The cast is, however, consigned to wading barefooted through water in the opulent “Grand Canal” scene.

This production which began life, as did the current long-running revival of “Cabaret” at London’s Donmar Warehouse, is hardly revisionist. But more importantly seems to be closer in its dramatic spirit to Fratti’s original play “Six Passionate Women,” in which a Fellini-like director fends off a parade of imposing women. Fratti has taken umbrage at his program credit, which states “translated from the Italian.” The text is, as he told me, mainly his, with a few additional scenes written by Kopit. Evidently there is an amicable understanding between the two writers.

For all the handsome production values contributed by Scott Pask’s handsome silvery unit setting and Vicki Mortimer’s ravishing and revealing costumes, it is the presence and performance of Antonio Banderas, in the role of director Guido Contini (originated by the late Raul Julia), that pilots the action to perfection. Banderas, who is making his Broadway debut, proves an excellent choice both dramatically and vocally. That the Spanish-born actor was a member of the National Theater of Spain before he was discovered by Hollywood, accounts for his accomplished stage presence and the authority that he brings to both his singing and his character. As the revered Italian film director preparing to start a new project whilst anguished by past indiscretions and future insecurities, Banderas embodies Guido’s roguish nature with a compelling boyish innocence. During the course of his stay at the spa, Guido is not only visited by some of the most manipulative, bossy and loving women in this life, he is also tormented by the memories of the most seductive and conniving women he has known.

And what better way is there for these women of all ages and sizes to first appear in Guido’s mind than to see them all slowly descending a narrow circular staircase, each step and movement calculated to define them individually not to say open both his and our eyes. And what more endearing way for the director, currently at an impasse in his creativity, to confront his artistic block and a near tragic act than by regression to his youth, as a nine year-old (William Ullrich).

Broadway legend Chita Rivera’s role, as Liliane La Fleur (for which Liliane Montevecchi won a Tony), Guido’s anxious film producer, has been expanded, but somewhat awkwardly. Despite stopping the show expectedly with a tango performed with Banderas, and with a gloriously performed “Folies Bergeres,”

Rivera is asked to flirt with members of the audience. It looks forced and outside the frame of the show.

No performance is more sharply defined, or filled with more natural sensuality, that that of Mary Stuart Masterson, as Luisa, Guido’s long-suffering wife. Myra Lucretia Taylor, as the voluptuous tarantella-singing whore who introduces sex to the young Guido; Mary Beth Peil, as Guido’s radiant mother, and Laura Benanti, as Claudia, Guido’s former, but still beguiling protegee, are three more wonderful memories to cherish in a show that is chock full of them.