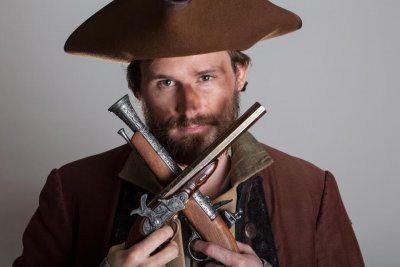 Eric Coles as Long John Silver in a scene from “Devil and the Deep” (Photo credit: James Wilson)

Robert Louis Stevenson’s Treasure Island is a piece of literature which, in addition to standing the test of time, has seen many different incarnations on both the stage and screen. Presented by Theatre East, Devil and the Deep is a musical reimagining of the timeless classic for a modern audience.

The story follows Jim Hawkins (Ethan Gabriel Riordan), a bright-eyed and incorruptible young boy raised by his mother, whose father passed some years ago. Together, Jim and his mother run a faltering family business, an old inn located in the port town of Bristol, England. As our protagonist, Riordan’s infectious innocence appeals to that innate sense of adventure which lies at the heart of the story. Jim’s mother, played by Raissa Katona Bennett, is extra protective of her only son and advocates for his innocence against all odds.

One night when Jim is closing up, a weary man of the sea stumbles into the inn seeking shelter. Sporting an eye patch, a gravelly voice, and a strong liking for a glass of rum, the man called Billy Bones (Kire Tosevski) sets the stage for this thrilling adventure. On the run from a mysterious band of pirates, Tosevski’s Bones warns of a treacherous fate should he be discovered by the unscrupulous. Of particular interest if he were to be found out, Bones is in possession of a map in which “x” marks the spot of the legendary and hidden treasure previously owned by the infamous Captain Flint. 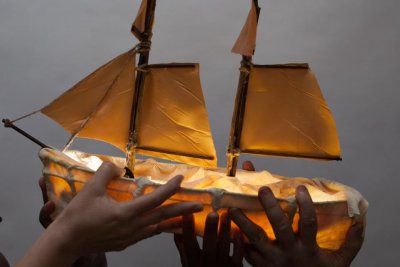 The schooner “Hispaniola” in a scene from “Devil and the Deep” (Photo credit: James Wilson)

Through a serious of events, Hawkins finds himself with an opportunity to leave his old life behind and embark on the journey of his life. Although hesitant at first, Mother Hawkins eventually comes to terms with Jim’s decision, and she sends her son on his way with the moving ballad “Be Who You Must Be.” Shortly after his departure, Jim is introduced to the mysterious sailor Long John Silver (Eric Coles), and this is when he takes his first steps towards adulthood in learning that not everyone is who they may at first seem to be. Coles’ Silver is dangerously likeable, but the irony of the character is in his ability to adapt to his surroundings effortlessly and his intent must be questioned. The musical score gives Coles’ strong tenor many opportunities to vocally shine.

In fear of spoiling the story for the uninitiated, so begins this wild and imaginative coming of age tale. In many ways, Devil and the Deep is quite innovative in its exploration of the classic text. Conceived by the team of Graham Russell (of Air Supply)  and Katie McGhie (music/lyrics), and Melissa Bell (book and additional lyrics), there are many moments which are marvelous in their ingenuity. A shining example is the character Cap’n Flint (Skyler Volpe), a talking parrot brought to life through the use of a puppet. With a gorgeous and life-like puppet at her disposal—designed by puppet masters Tanya Khordoc & Barry Weil, Volpe jaunts across the stage humorously, and is the catalyst for many moments of joy and laughter in the production. As self-aware in context as possible, the opener of Act 2, “Parrot Talk,” is hilarious and entertaining, and helps to remind the audience that this is an evening in which fun is meant to be had. 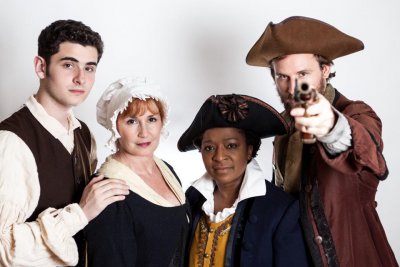 As if a talking parrot weren’t magical enough, the production and costumes are truly inspired. Conceptualized by Alisa Simonel-Keegan & Jim Keegan, the set design for this production is imaginative and destroys the perceived idea of value for a show presented in a black box theater. The lighting design (Jessica M. Kasprisin) is particularly beautiful, and is so unique in that it breathes a singular life into each separate exotic location.  The finishing touch in the quest for an unmistakable mysticism and adventurous spirit can be traced to the costume design (Adrienne Carlile) which sees every single pirate, sailor, parrot or person uniquely dressed.

Directed by Lisa Devine, this is a skillfully directed production which fires on all cylinders. Daunting, exciting, and ambitious, Devil and the Deep is the retelling of a world-famous story through a completely original lens, which pays homage to the source material in a way that is imaginative, inspiring and keen to the childhood spirit so oft forgot.