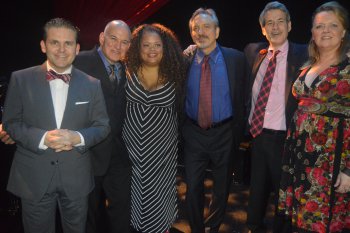 Who hasn’t heard of the Algonquin Round Table of the 1920’s and the fabled Oak Room cabaret where many notable singers appeared for decades?  Michael Elihu Colby, aka “the Algonquin Kid,” had the good fortune to be the grandson of the couple, Ben and Mary Bodne, who bought the fabled Algonquin Hotel  in 1946 after the death of its original owner Frank Case and restored much of its former glory after decades of benign neglect.

Colby’s fascinatingly entertaining autobiography, The Algonquin Kid, was turned into a one-time theatrical event as part of the Urban Stages’ Winter Rhythms series, hosted by Mr. Colby, produced and directed by Peter Napolitano, with Bill Zeffiro at the piano playing a rich list of songs associated with the many famously creative hotel guests and a few written by Mr. Colby himself.  As a real-life Eloise, Mr. Colby was witness to much history and this show, barely scratching the surface, was witness to his good fortune.

Robert Creighton, Natalie Douglas, Leah Hocking and Martin Vidnovic, four respected musical theater talents, wrapped their beautiful vocal chords around a cornucopia of songs either written by Algonquin guests such as Lerner & Loewe and Noel Coward or sung in the Oak Room by such artists as Greta Keller, Steve Ross and Andrea Marcovicci. 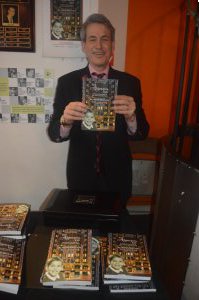 Writer Michael Colby with copies of his memoir, “The Algonquin Kid” (Photos by Maryann Lopinto)

Mr. Colby, helped by a well-organized slide show, gave a thumbnail sketch of the history of the Algonquin.  He is descended from generations of Southern Jews who were merchants.  His adventure-loving grandparents, Ben and Mary, invested in the hotel, renovated it and became famous for their hospitality, gemütlich atmosphere and beautiful decorations.

So star-struck were the Bodnes that they welcomed with open arms the scores of creative guests, many staying for free, and fostered their grandson’s musical aspirations.  Indeed, Mr. Colby is the author of a number of musicals, some represented here, a many of them rehearsed in a studio in the Algonquin Annex.  His stories of actors eager to be in his shows because they were so well fed by the Algonquin kitchen were amusing.

They also turned the Oak Room into the premier cabaret venue under the auspices of Donald F. Smith, founder of the Mabel Mercer Foundation and the New York Cabaret Convention.

Mr. Vidnovic began the musical portion of the afternoon with a robust “On the Street Where You Lived” by Lerner & Loewe who occupied room 908.  Also written in that room was the boisterous “I Could Have Danced All Night,” here sung with joyous abandon by Ms. Hocking.  Noel Coward was very well represented, too, his “Don’t Put Your Daughter on the Stage, Mrs. Worthington” and “Why Must the Show Go On?” hilariously interpreted by Ms. Hocking. 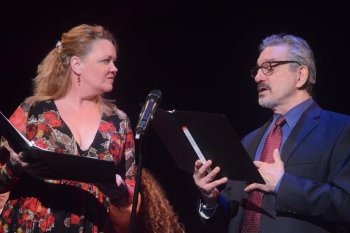 Leah Hocking and Martin Vidnovic as they appeared in “The Algonquin Kid,” part of Urban Stages’ Winter Rhythms (Photos by Maryann Lopinto)

From Rodgers & Hart, Mr. Creighton sang the droll “I Wish I Were in Love Again” with a twinkle in his eye and Ms. Douglas squeezed all the good-natured raunchy double entendres out of “Bewitched, Bothered and Bewildered.”  In her inimitable way, Ms. Douglas also turned “Summertime” (the Gershwins/DuBose Heyward) into a passionate art song.

Mr. Colby’s musicals included Charlotte Sweet, from which Mr. Creighton sang the Cockney “Vegetable Reggie,” and Mrs. McThing, from which Mr. Vidnovic and Ms. Hocking sang the charming “How Do You Make Magic?”

The list of the famous who rested their heads at the Algonquin would take up several pages of its own:  Marilyn Monroe, Ella Fitzgerald, Oscar Peterson, Mary Chase, Angela Lansbury, Laurence Olivier, Alec Wilder, etc.

The show ended with the audience asked to join in on a for-the-occasion re-write of Rodger & Hart’s “There’s a Small Hotel,” with new lyrics touting the storied history of the Algonquin—a fitting coda to a very charming show.