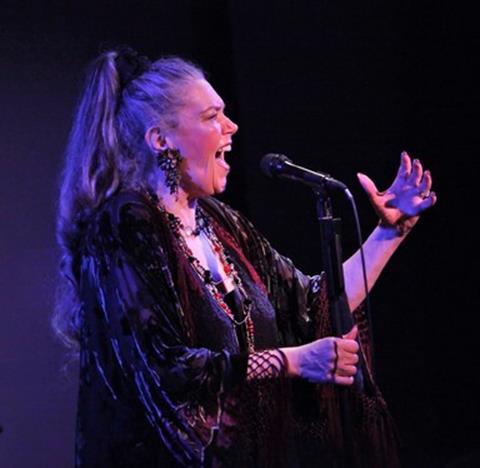 It was an intimate setting at the Metropolitan Room in Manhattan for Baby Jane Dexter’s cabaret, “Rules of the Road (Part 3),” where she sang a lot of sad love songs like “Willin’ Woman,” “Arm & Leg,” “Guilty,” and “I’d Rather Leave While I’m in Love,” to a small crowd of friendly faces.

In her deep, bluesy contralto style, she belted out about 15 songs; they were not all melancholy, though. She started out with an uplifting “I’m in Love Again” and ended with “Forever Young.” One of the more touching numbers was “Reach Out, I’ll Be There.” She also sang a quite lengthy “I’m a Woman” about a girl becoming a woman and she did a version of “Dame.” She sang tunes by Rodgers & Hammerstein, Cy Coleman & Peggy Lee, Peter Allen & Carol Bayer Sager, Holland-Dozier-Holland, Leslie Bricusse, Billy Roy, Leiber & Stoller, Mike Scott, Randy Newman, and John Bucchino.

Baby Jane is a striking woman with beautiful long, flowing hair and a nicely sculpted face that you would not forget if you ever saw her on the street. This all goes together with her powerful voice that resonates throughout the room; she has a presence and energy that causes you to sit up and notice her.

She has to be admired for going ahead with the show after her fall last month on her way to do the Marathon where she injured her eye, among other things. She came in sporting a cane, a still healing eye, and had to sit through most of the performance. I think that endeared her to her audience even more than her dynamic vocal which kept you enthralled no matter what she sang.

She sang all the songs herself but was accompanied by her longtime music director Ross Patterson on piano. His command of the instrument was flawless and they made a good fit. The legendary Baby Jane has performed in a variety of venues across the country including Reno Sweeney, The Ballroom, Eighty Eights, Blues Alley, Weill Recital Hall, and even The Kennedy Center. The Metropolitan Room, which will celebrate its ninth year in May, has been her New York base of operations since the beginning. She will be performing seven performances of “Rules of the Road (Part 3)” there during the holiday season. Baby Jane has released a number of CD’s and has received six major MAC Awards, two Nightlife Awards, and two Back Stage Bistro Awards over the course of her career.

Stephen Holden of the New York Times describes the impact of her amazing voice this way, “Applying her formidable contralto to the song, Ms. Dexter tosses thunderbolts, but they won’t hurt you; their big, crashing sound is driven by a big heart.” That about sums it up.

The Metropolitan Room, 34 W. 22nd Street, between 5th and 6th Avenues, in Manhattan