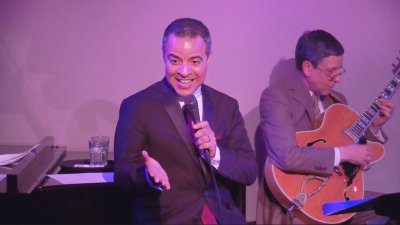 “Don’t you love this groove!” exclaimed vocalist Richard Malavet to the audience at the Metropolitan Room as his terrific band played a wildly exotic instrumental sequence from Irving Mills, Juan Tizol and Duke Ellington’s lush song “Caravan.”  It was one of the exciting highlights of Mr. Malavet’s wonderful cabaret act The Billy Eckstine Project: Songs In the Key of “B.”

“He was the premier balladeer of his generation and the first African-American to sing a song on network radio,” Malavet declared of the entertainer.  Billy Eckstine (1914-1993) was a Pittsburgh-born African-American jazz and pop singer, bandleader and songwriter. He sang with the bands of Earl Hines, Duke Ellington and Count Basie. During a career lasting over 50 years, Eckstine had several hit singles, toured extensively and appeared on major television network programs.

Besides breezily delivering his very well researched biographical commentary, Malavet, of course, sang.  Possessed of a richly expressive jazzy baritone voice, a delightfully assured idiosyncratic phrasing and a highly charming presence he rapturously performed a collection of songs “that put Mr. B. on the map.”

Powerfully opening with Harry Warren’s “You’re My Everything,” the show finished with an aching rendition of Burton Lane’s “Everything I Have Is Yours.”

In addition to the spectacular “Caravan,” Ellington was well represented by soaring treatments of “Do Nothing Until You Hear From Me” and “Sophisticated Lady.”

Sarah Vaughan was “his baby,” they had a long and warm collaboration and that was commemorated by a lovely version of Irving Berlin’s “Always.”

Johnny Mercer and Hoagy Carmichael’s wistful classic “Skylark” was a dramatic standout.  Wearing a dark blue suit, precisely gesturing, illuminated by striking lighting, and with the full force of the band, Malavet was commanding. 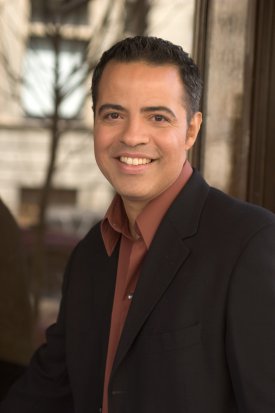 Those accomplished musical and technical elements endowed the presentation with the qualities of a full-fledged production.  Musical director Lafayette Harris, Jr. was skillfully on piano and the arrangements by Norman Simmons were fabulous.  Carlo De Rosa was smoothly on bass.  Four-time Grammy winner Vince Cherico on drums was pulsating. Grammy and Latin Grammy winner Peter Brainin on tenor sax was resounding. The dreamy tones of Tim Ouimette on trumpet beautifully enriched the numbers.  Lighting and sound designer J.P. Perreaux’s efforts added a dynamic theatrical dimension to the show.

“The Allman Brothers! That’s my song!”  Malavet joked about the rock band that released a popular cover of Eckstine and Hines’ “Jelly, Jelly” in 1973, before doing his own lively take on it.  An inventive reprise of this was the encore.

“It’s secretly my theme song” Malavet cracked before performing “I Apologize,” one of Eckstine’s signature numbers which was awarded The Grammy Hall of Fame Award in 1999.

“A Cottage for Sale,” “Prisoner of Love,” “Fool That I Am” and “Stormy Monday Blues” were among the comprehensive career selections performed during the show.

As he did last year in his superb Frank Sinatra centennial tribute, Richard Malavet brought focus to a great artist, this time with perhaps even more impact, as many people may not be so familiar with Eckstine’s accomplishments. Malavet’s incomparable vocal and performing talents gloriously corrected this possible ignorance with his highly informative and very entertaining The Billy Eckstine Project: Songs In the Key of “B.”