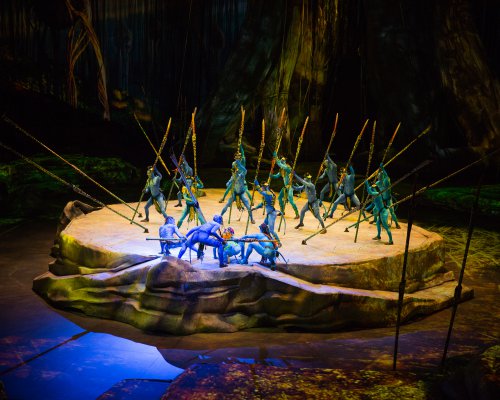 Toruk – The First Flight is a new departure for Cirque du Soleil. Inspired by James Cameron’s blockbuster film, Avatar, this 37th production is a plot-driven quest story of the Na’vi people 3,000 years before the events in the film, newly written and directed by Michel Lemieux and Victor Pilon, who also created the impressive multimedia.  Visually stunning, Toruk includes 20 sequences and changes of locale created by cutting-edge technology. The huge set, partly created by streaming video and projections, allows for a multiple of colorful environments on the moon Pandora, from lush green and purple gardens, to red deserts to huge waterfalls and active volcanoes. The performers are decidedly blue with tails, just as in Cameron’s conception, though none are seven feet tall as they were in the film. In this latest Cirque du Soleil show, the acrobatics are strictly in service of the storyline.

And that is part of the problem. Cirque du Soleil is famed for world class feats and flights of daring. Here the acrobatics look more like ballet and movement and aside from the impressive synchronization, the individual numbers are missing the wow factor. Another problem is that the dialogue is the Na’vi language invented for the film. Though there is a narrator called The Storyteller (played with authority by Raymond O’Neill), at no point does the audience know what the characters are saying. We look around for subtitles in vain. Once the quest story is set up, it becomes rather predictable so all that is left is the visuals which grow exhausting after a while. Never are we allowed to see any of the environments for any length of time as they are almost continually changing. 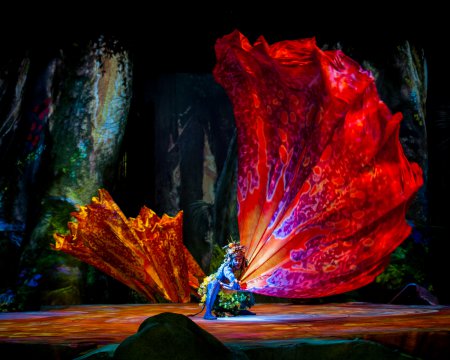 Toruk – The First Flight is the story of a rite of passage. One of the five clans on Pandora, the Omatikaya tribe who live at the foot of the enormous Home Tree with two story Loom, is preparing for the annual coming-of-age ritual. Ralu (a bold Jeremiah Hughes) and Entu (the more sensitive Daniel Crispin), friends since childhood, are the participants in this event. Unfortunately, Ralu passes the first trial, but Entu fails. An earthquake causes The Shaman/singer (a moving Priscilla Le Foll) to have a vision of a terrible river of lava threatening the Tree of Souls which is needed by the Pandorans to stay in touch with their ancestors.

While Ralu is given a talisman, Entu wanders off into a bioluminescent forest with Ralu in hot pursuit. Under the Tree of Souls, the young men are given a message that only the flying monster Toruk can help save the Tree, but that they must gather the five sacred objects, one from each tribe, before this can happen. When they are attacked by Viperwolves, Tsyal (an audacious and enterprising Giulia Piolanti) from the Tawkami clan saves them and lead them to this second tribe. In the course of the show’s two acts, the trio travel to each clan (the Tawkami or flower people, the Anurai clan or bone people, the Tipani clan or pole people, and the Kekunan clan or Banshee people played by a multitude of kites.) Although none of these clans believe the youngsters’ story of their quest, when the lava begins to flow, the prophesy comes true and the scarlet and yellow Toruk (an enormous kite) appears, as ominous as predicted. 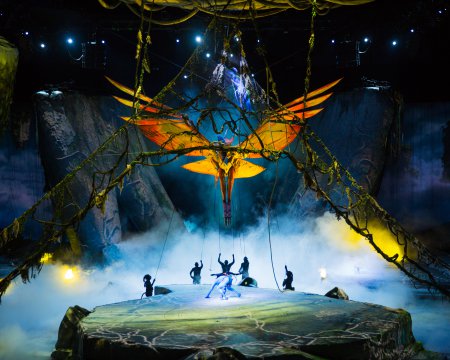 The show includes pole vaulting, giant flowers that rise up out of the ground, the building of the bone structure of the totemic Thanator, the high flying of the Toruk, a flock of birds played by kites, pulsating live drumming, two earthquakes, the lava flow, a three story water fall, and the rise of the river by which the Pandorans are saved. Along the way the questers are beset by various exotic animals played by 16 huge puppets (designed by Patrick Martel) which are manipulated from inside by the performers. As the trio travel from one clan to another, the environment before us morphs from one colorful place to another in Carl Fillion’s monumental set and prop design.

Another issue is that although the 115 costumes and makeup by Kym Barrett for the 35 performers are quite remarkable, the set which is the size of a football field is so remote that the audience is never close enough to marvel at these creations. It all looks like watching a movie from a block or two away from the action. Among the more successful elements are the magical lighting by Alain Lortie and the original score by Bob and Bill. Tuan Le and Tan Loc are responsible for the choreography while Germain Guillemot has designed the acrobatic performance.

Cirque du Soleil’s Toruk – The First Flight is an unusual spectacle. On the one hand, the visuals are breathtaking and awesome in their technological capabilities. On the other, the show is both predictable and remote in the huge scale of the set and staging. However, devotees of James Cameron’s Avatar will enjoy the chance to see Pandora live and the show does have memorably spellbinding moments which will stay in the imagination long after the event is over.