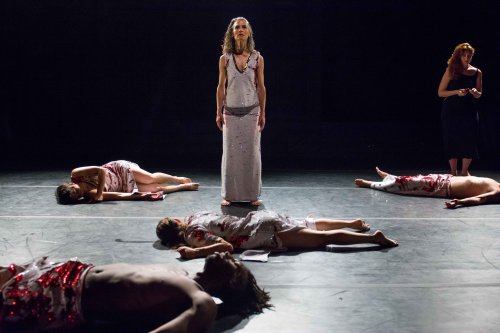 Between January 7 and January 12, 2020, The Joyce Theater presented a series of dance programs titled American Dance Platform in which two dance companies shared one evening (or matinee) giving audiences an opportunity to see two for the price of one. On January 10 and 11, Rosie Herrera Dance Theatre was paired with Rennie Harris Puremovement American Street Dance Theater.

Rosie Herrera Dance Theatre is a contemporary dance company based in Miami that works as a collaborative effort, choreographing as a group and pulling in styles from various forms of dance, drama and artistic endeavors. The program says: “RHDT is committed to expanding perceptions of the Latin American experience by creating visually striking, humorous, challenging, and deeply vulnerable work that aims to invoke empathy for the outsider.” They presented Carne Viva (Ed.: translated as either “Live Meat” or possibly “Raw Meat”) from 2016.

I personally prefer classical ballet with its technique and tradition, but that doesn’t account for my overwhelmingly negative response to the first part of this piece.  I was baffled and deeply bored: A strong man in white held up a small woman, as if she might have been a child, under her arms. She hung there, and hung there, and hung there some more, and he continued to hold her up until his muscles began to tremble. Perhaps that’s something that one might want to see at a weightlifting competition, but it doesn’t interest me. Later, three women touched his body with small, square patches, as if tending to his wounds. Then using similar motions, they placed slices of bread and made sandwiches on his body. Then they nibbled on the sandwiches. Just because they move, does that make it a dance? I might have tried to make some meaning from what was happening on stage, but I didn’t feel connected at all. Stillness can be a contrast, but if that is all there is, then it becomes tedious and boring. 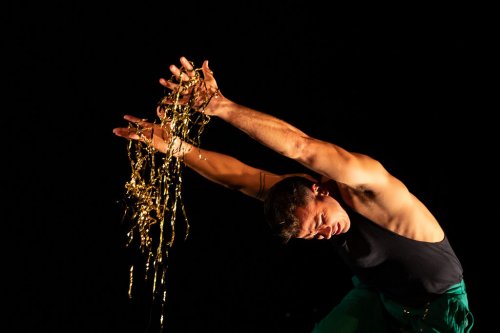 Although I don’t know how the second part related to the first, it was a marked improvement, a dramatic dance between two women. With each beat of music, there was a gesture of attack, part of a physical fight. One blow, stop, and then another. The two women circled one another and fought on. The give-and-take to the music was intense. The fight turned into a wrestling match that eventually turned into hugging. A sexual meaning seemed to arise, or perhaps it could have been any altercation that ends with conciliation, but it was dramatic and involving.

The costumes were designed by Rosie Herrera herself. The women wore short, burnt orange-colored dresses with tight rose-colored shorts underneath. Although the dresses seemed to be alike, each one was slightly different. David Ferri designed the lighting. There were no sets, so the lighting provided effective spaces.

After an intermission, the Rennie Harris Puremovement American Street Dance Theater exploded onto the stage with raw vitality. Harris, who choreographed most of the works, combined various styles of street dancing (mostly hip hop). His dancers were diverse, athletic, very, very energetic, full of personality and thoroughly entertaining. From the moment the curtain went up, they were moving, often in unison, sometimes individually or in groups around the stage. The heavy beat was infectious. 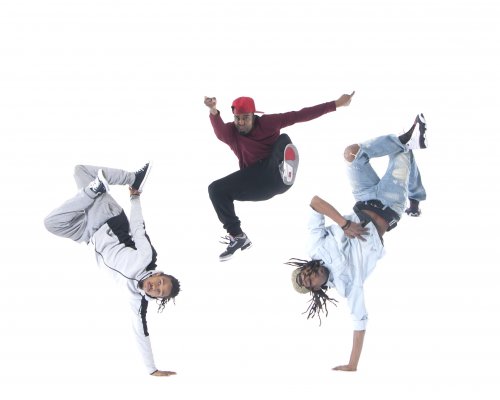 At some points, there were projected videos in which Harris described his company and its stated purpose: to promote an understanding of his community (mostly African Americans) and give them a platform for expression. (The company also performs an amount of outreach wherever they perform.)

Most of the dances were choreographed by Rennie Harris, who designed abstract and entertaining dance patterns incorporating hip hop and other street dances, sometimes using small gestures, isolated muscle twitches and astonishing gymnastics. One piece, titled “Locking Exposed” was choreographed with Hoodlockers, a separate group of hip hop dancers who sometimes perform with the company. And another unusual piece, titled “Black Promises” (with Beyoncé’s “Sandcastles” as music) was choreographed and danced by Kai Rapelyea (and directed by Harris.  Rapelyea’s dance was more of a dark drama, about the death of a friend. His ability to twist his body in an apparent double-jointed manner added to a sense of grief he projected. It was an example of how hip hop can be used for dramatic purpose or to tell a story.

The recorded music choices were various, with different instruments, vocalists and styles, but each had a strong beat that supported the movement. (Some examples: “Trinity Ov Me” by Osunlade, “Round, Round, Round” by Al Jarreau, and “Man with a Movie Camera” by Cinematic Orchestra.)  The individual dances were short, stylistically similar and went from one to another with only the change of music selections to indicate that they were different pieces and not part of a larger project. 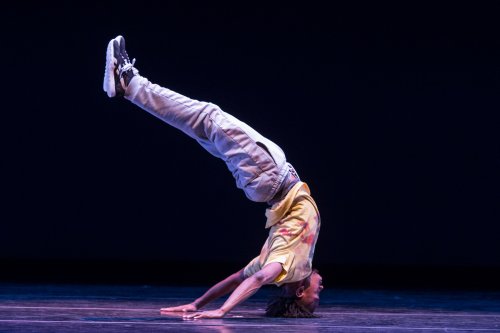 Although there was no set, the lighting by Bob Steineck must be noted. It was complex and clever, creating dramatic spaces and different backgrounds with colors, shafts of light or spotlights.

The overall impression of the company was that it was not an ad hoc, rag tag group of dancers who threw together a program off the street, but a creative organization of theatrical talents who understood how to entertain an audience. Frequently, members of the audience joyfully called out support or approval. The experience was fun, uplifting and inclusive – even for a balletomane.

The Joyce Theater, 175 Eighth Avenue, at 19th Street, in Manhattan

Running time: one hour and forty-five minutes including one intermission