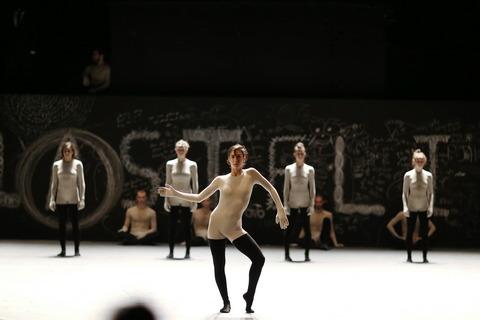 The Israeli-based Young Ensemble of Ohad Naharin’s Batsheva Dance Company presented the hour-long “Naharin’s Virus,” (inspired by Peter Hanke’s play, Offending the Audience) a messy, often visually confusing and thought-provoking, yet confidently danced work that incited anger, confusion, and ennui with its patterns of repetition and a narration that ended in a tirade of profanity.

The troupe is at The Joyce Theater for an ambitious two-week season, evidence of The Joyce’s confidence in its drawing power which, at least at the performance I attended, was more than justified by a sold-out house.

Naharin is known for having “invented” a movement language called Gaga.  Frankly, I’ve never been able to distinguish Gaga from any other movement palette.  If Gaga means disconnected bits of movement utilizing hints of modern, ballet, hip-hop, mime and even ethnic movements, then it’s not particularly original.  All these movement vocabularies were on display in “Naharin’s Virus” whose sixteen-member cast was put through their paces for an overlong hour.  (The work could easily have been edited down by at least twenty minutes and been more effective, particularly by eliminating a long monologue about a self-abusing young lady.)

Nevertheless, “Naharin’s Virus” was an intense, if mystifying experience that combined dance with a pretentiously ironic narration and the prolonged creation of a graffiti mural on the back black wall of a set (whose designer was not credited).  The tight costumes—white on top and black from butt to toe—were designed by Rakefet Levy.

By the end of “Naharin’s Virus,” the back wall—one of three that enclosed the stage—was covered by all sorts of chalked messages in many languages, including, of course, Hebrew, plus caricatures, obscenities, geometric shapes and even a graph-like line created by the first dancer on stage who seemed to be suffering as she clung to the wall tracing her emotional ebb and flow, using her own body as a template.

The narration, written by Handke and spoken in charmingly accented English by dancer Evyatar Omessy standing above the set in a faux business suit (designed by Zohar Shoef), was, at first, merely ironic as it described to the audience what they were seeing using the second person “you,” what they were thinking as they sat in the theater seats, and even how they would feel at the end as they gathered in small groups outside The Joyce discussing what we had seen.  But, a five-minute, rambling harangue using every disgusting swear word, insulting ethnic stereotypes (bizarrely, mostly aimed at Jews) and nasty dismissal of the intelligence level of the audience nearly put the kibosh on the often hypnotically choreographed work.

A floppy, tall, skinny balloon man, the kind used to advertise gas stations and supermarkets, flailing about aided by a fan greeted the audience pre-performance.  Its odd twists, turns and bends were later echoed in Naharin’s choreography.

As the house lights dimmed, vibrant Arab folk music blared, promising some good times, a promise definitely not fulfilled.  Instead, the music abruptly stopped as a young woman, her body bent and twisted and slowly undulating, clung to the back wall as she drew a long line that traced parts of her body as she moved slowly down the wall.

Soon a lone male dancer joined her, slowly walking across the entire stage to embrace her with no desire or delight, two elements missing from “Naharin’s Virus.”  She used his form to draw on the wall.

Six other men entered, blandly staring at each other across the stage.  Women joined them and Naharin’s distinct, limited movement lexis is revealed:  bent-over, twisted bodies; arms held stiffly away from the waist or high above the head with hands bent sharply at the wrist; slow undulations of the torso, sudden bursts of loose jumps in second position (legs apart); lots of ostensibly aimless walking that ended in the dancers forming discrete groups that moved in contrast to each other until they joined in a stage full of unison movement.  At one point the dancers lined up at the edge of the stage to scream at the audience, vocalizing being yet another “theme.” 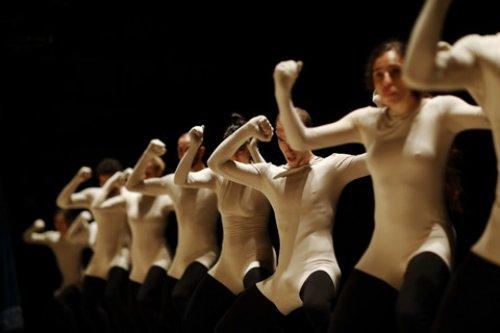 Despite the continual stop and go and randomness of the choreography, Naharin, thanks to the committed, trancelike performances of his dancers, managed to give “Naharin’s Virus” gravity, a sense of world-weariness and even wisps of emotional—though depressing—weight.

The constant, bothersome interruptions by the narrator (whose exhortations often spoke the obvious:  “You are sitting in rows. You are facing in one direction,” etc.) leading up to the grand finale of the stream of consciousness vileness that ended the show were a mere theatrical jest, totally disconnected from the choreography.  To be sure, he ended with an ironically pleasant “Thank you and good-bye,” as if that erased the previous five-minute rant.  “Naharin’s Virus” too often became a play with dancing.

The musical score, which varied from the aforementioned Arab sample to droning notes that harmonized to the famous “Adagio for Strings” by Samuel Barber, also seemed to exist for mood, rather than support the movements.

Avi Yona Bueno’s lighting was superbly moody, a character in itself.

Running time:  one hour with no intermission