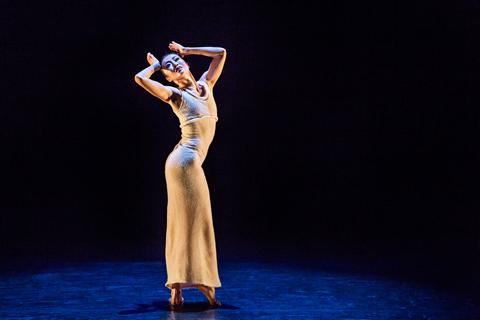 Right up there with all the major creative artists of the twentieth century is Martha Graham, the great choreographer and creator of a fresh approach to dramatic movement.  The great lady of dance passed away in 1991, but her company, formed in 1926, is still going strong under the artistic direction of Janet Eilber, the congenial hostess of the troupe’s performances in its recent season at the New York City Center, long a center of dance.

The program I attended included two early works, a late ballet and a work choreographed by Lucinda Childs, a dancemaker famous for her minimal approach to choreography.  From the intensely decorative “Ekstasis” (1933, reimagined by company member Virginie Mécène in 2017) to the explosive “The Rite of Spring” (1984) Graham’s singular approach to movement was evident.  Long accused of being old-fashioned, this program proved that when her works are well danced—splendidly in this case—they have much to offer contemporary audiences.

“Ekstasis,” danced by PeiJu Chien-Pott, her hair loose, her costume a tight tube of form-fitting jersey (designed by Graham, herself), stood still as eerie clacking percussion and quiet woodwind music passed through her body, eventually causing her hips to jut from side to side and her bent arms to move in increasingly large circles.  “Ekstasis” is clearly a remnant from Graham’s days with the Denishawn company which specialized in soft-focused versions of ethnic dance forms from all over the world, using them for their decorative effect rather than expression of deep emotions.  Ms. Chien-Pott was terrific, unabashedly decorative, yet adding emotional depth through her personal style and commitment. 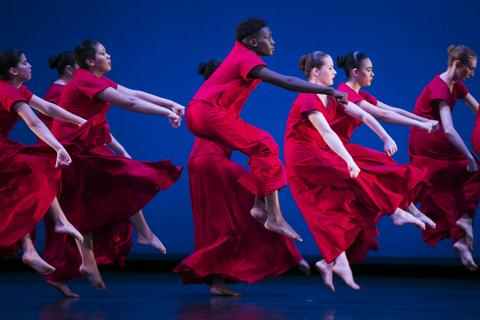 Graham’s “Panorama” from 1935 (restaged by Oliver Tobin and Amélie Bénard) is one of her passionate appeals to humanity’s need for freedom.  Using a large cast of thirty-three chosen from the Teens@Graham All-City Panorama Project, the work was performed in three sections:  Theme of Dedication – Imperial Theme-Popular Theme.

To a score of finely etched drumbeats and brass composed by Norman Lloyd, the large cast, dressed in Graham’s severely draped red costumes, entered in formal lines of stomping figures, an imposing sight.  They held their arms stiffly as their lines crisscrossed and melted into circles within circles, dividing into smaller groupings that seemed to compete with each other. They pumped up and down in place, their hands clenched dramatically.  Bodies tilted suddenly as arms shot up and down.

In a legato section some dancers stretched out on the floor as if posing for a sculpture as others looked on with disdain.  Next they jumped, if not exuberantly, then with dramatic intensity and pranced with high knees in ever-changing patterns.

“Panorama” is a portrait of a society torn by civil discord.

Graham’s “The Rite of Spring” (l984) is also a portrait of a society in turmoil.  She followed the basic story of a group meeting to decide the fate of a single woman, sacrificed to the ancient gods.  On a curving ramp—scenery by Edward T. Morris—The Shaman (a charismatic Abdiel Jacobsen) stands, his robes—costumes by Graham and Halston—adding drama to his movements.  Eight hunky men wearing only tiny black shorts perform large, athletic movements (leaps, kicks and cartwheels) eventually leading on eight women, one of whom, Charlotte Landreau (brilliant), is fated to dance to death.

This “Rite” is too schematic and its portrayal of ancient rituals too clean, but Graham knew how to use the powerful score—here played live by The Mannes Orchestra, conducted admirably by David Hayes—for optimal dramatic effect. 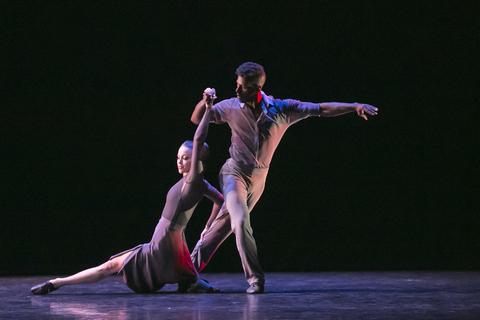 Like other modern dance companies—Paul Taylor, José Limón, etc.—the Graham troupe has invited choreographers to experiment with its dancers.  Lucinda Childs’ mildly dramatic “Histoire,” to music by Krzysztof Knittel and Astor Piazzolla, began with a formally attired couple, Lorenzo Pagano and Xin Ying, coolly going through the motions of romance via simple, clean ballet movements and lifts.  They are joined by three other couples who mimic, perhaps mock, the first couple.

Childs has abandoned her mathematical minimalism in favor of tapping into the emotions of the dancers.  However, nobody wins, nobody stays in love as the men and women walk past each other and off in separate directions at the end.