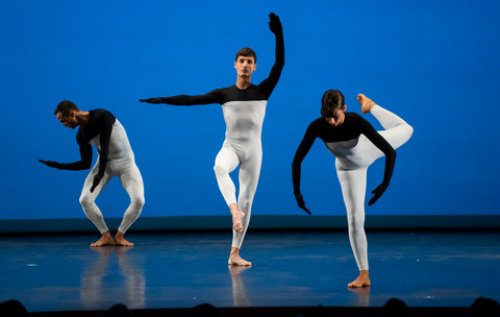 The New York City Center’s Fall for Dance has become a staple of the New York City arts scene, pulling in jaded dance fans and balletomanes along with total neophytes and skeptics.

Program 4 of the 2019 series included works by two esteemed modern dance choreographers and two by young “with it” dance makers.  All four had their fascinations and a few frustrations.

Dressed in Martha Skinner’s black and white body-hugging costumes (the black part extending down to the hands, like opera gloves), the eleven dancers performed this calm 30-minute work which was also lit by Ms. Skinner.  Key movement themes were centered on the arms which included stiff, out-stretched positions, elbows jutting out and birdlike undulations, all performed over balletic positions along with—never “to”—the John Cage score which consisted of tinkling piano notes and rasping percussion sounds. Interestingly, one of the four performers of the score was Robert Swinston, a former Cunningham Company member and the stager of this production.

The dancers managed the simple, calm movements well, but, frankly, several were not in tiptop professional dancer shape, muddying their lines, so important in Cunningham’s ballets.  Even though this work—like many of Cunningham’s—is performed with calm visages, but calm doesn’t mean unemotional or unengaged which these dancers were.  This performance lacked intensity and sense of purpose. 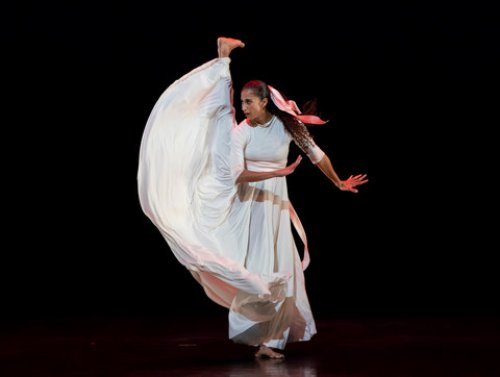 The late, great Geoffrey Holder created “Come Sunday” in 1968 for his wife, the splendid Carmen de Lavallade on the occasion of the reopening of the Ford Theater (where Lincoln was assassinated).  Alicia Graf Mack danced this solo under the tutelage of its original performer and did well in this passionate work to songs by Odetta.

Dressed in a long, white dress—another Holder/de Lavallade hallmark—Ms. Graf Mack began lying on the floor to “Glory, Glory,” slowly rising to her knees in a prayerful pose.  Working from worship to sadness through defiance accompanied by “Deep River,” “He’s Got the Whole World in His Hands” and “Joshua Fit the Battle of Jericho,” she moved more and more expansively as her confidence and pride increased. 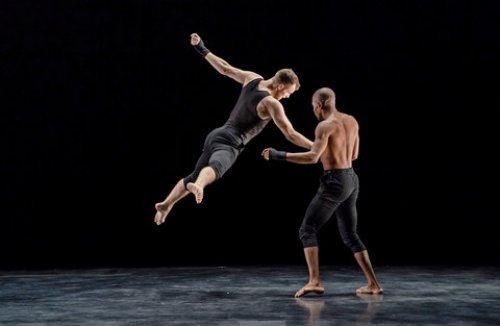 Madboots Dance, a contemporary dance troupe dedicated to LGBTQ themes is based in NYC.  Madboots contributed “For Us,” choreographed by the company’s artistic directors, Jonathan Campbell and Austin Diaz and danced with dazzling sensuality by David Maurice and Austin Tyson dressed in James Michael’s form-revealing black costumes.  “For Us” was created as a response to the mass shooting at the Pulse Nightclub in Orlando, Florida, in 2016.

Using Shirley Bassey’s “Somewhere” and Judy Garland’s “Somewhere over the Rainbow,” songs which elicit automatic emotional responses in many, the two men at first were in an emotionally combative mood, approaching and then avoiding each other lit only by a strip of lights sitting on the stage—lighting by Kate Ashton—giving them a dramatic chiaroscuro.

The voice -over reading of a sad, yet uplifting poem by Allen Ginsberg turned the emotional tide.  The two began partnering each other in more and more intimate ways, ending “For Us” in an embrace.  All the movements were tough, large and masculine, demanding great control by the dancers who performed remarkably, both technically and emotionally. 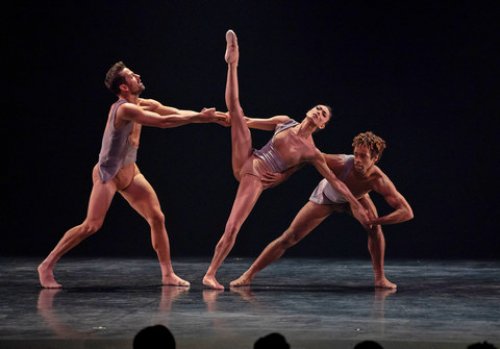 The final work, “Unveiling” by Sonya Tayeh, director of Tayeh Dance, known now as the choreographer of the Broadway hit Moulin Rouge!, used a trio which appeared to be about a female (the American Ballet Theatre star, Stella Abrera) an interloper interfering with a gay relationship between Robbie Fairchild (formerly of the New York City Ballet and the star of An American in Paris on Broadway and the West End in London) and Gabe Stone Shayer.

What made “Unveiling” the hit that it proved to be was the music performed live by the super-humanly talented Moses Sumney who stood on a small platform singing, wailing, thumping, rattling and otherwise issuing a spectrum of gorgeous sounds that supported Tayeh’s complicated portrait.

“Unveiling” was a world premiere commissioned by Fall for Dance.