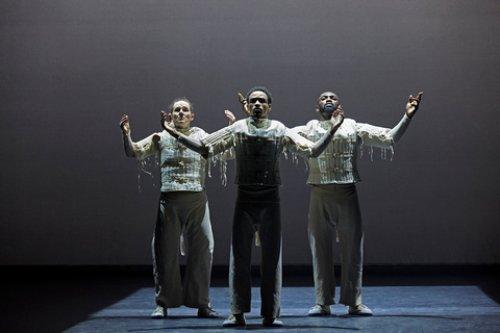 As the thumping score to Blak Whyte Gray began reverberating, filling the Gerald W. Lynch Theater, I wondered what Wolfgang Amadeus Mozart would have thought about Boy Blue’s powerful hip-hop journey and its often bleak, but loud score (created by Michael “Mikey J” Asante, one of the two Boy Blue’s directors).

After all, this performance was part of Lincoln Center’s Mostly Mozart Festival.  I can’t image “Wolfie” basking in the thumping percussion, the electronically muddled vocals and artificially created string sections, let alone the sensuality of the movement palette.  But, Mozart, himself, was an innovator who might just have tossed his wig away and boogied the night away with Constanze! 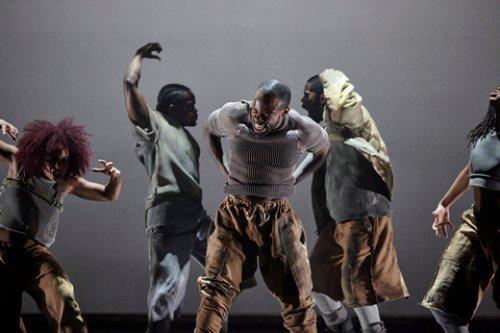 All three were trapped in a rectangle of light which gradually shrunk making their already frantic movements even more so.  The music boomed as they vibrated, twisted, pulsated and stopped with dramatic suddenness.  This was desperation of the highest order.

“Gray” used all the dancers in the company and similar musical accompaniment with the addition of a ghostly voice spouting loose phrases.  Here the choreography was freed to fill the stage in canons of movement that built to major unison statements.

“Blak” was another full-company section that was composed to similar percussive music, but was the only part of the work that included color:  a long red piece of cloth that was wrapped ceremoniously about one dancer, then used to gently corral the group and then as a colorful backdrop.  “Blak” ended on an upbeat note, the lights brightened with color and the movements obviously buoyantly joyous bring Blak Whyte Gray to an optimistic finale. 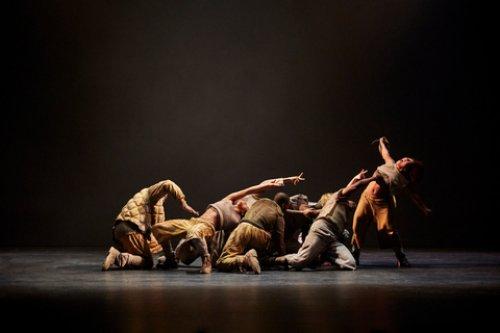 The choreography was a seamless blend of hip-hop, African, modern and copoeira dance forms with the addition of a detailed, expressive vocabulary of gestures that resonated with a range of emotions from anger to happiness (which helped soften the unrelenting darkness of most of the work).

All the dancers were terrific—more than terrific: precise, expressive and totally involved in the experience of communicating the woes—and to a lesser extent, the joys—of their community.   Aside from those mentioned above they were Theophillus “Godson” Oloyade, Natasha Gooden, Jordan Franklin, Dani Harris-Walters and Idney De’Almeida, all spectacular.

The brilliant, moody and exacting lighting was by Lee Curran who turned the stage into a mysterious world in which the dancers could play out the vision of Asante and Sandy.