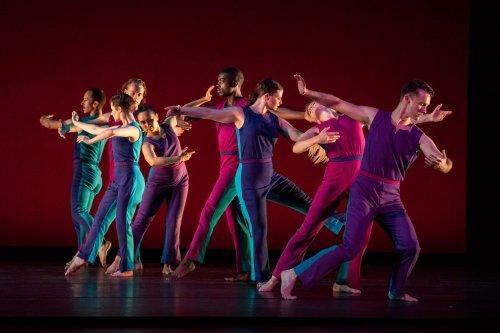 The Mark Morris Dance Group has been showcased in Lincoln Center’s Mostly Mozart Festival several times before and is always an honored guest.

Morris is that rare choreographer—others being Paul Taylor, George Balanchine, Jiri Kylian—whose movements can suddenly make you experience music differently. This doesn’t mean that his choreographic output is always topnotch. Indeed the three works his company danced at Jazz at Lincoln Center’s Frederick P. Rose Hall—none by Mozart, ironically—showed a fine craftsman at work dealing with the challenges each of three very different scores. (All music is played live at MMDG performances by the MMDG Music Ensemble and extraordinary guest artists.)

The world premiere “Sport,” choreographed to more than twenty bits and pieces by Erik Satie, appropriately named “Sports et divertissements” (played by the brilliant pianist Colin Fowler), was a not very exciting examination of every competitive sport from golf to sailing to swimming to running to tennis to etc.

Dressed in Elizabeth Kurtzman’s colorful one-piece overalls, the cast of twelve imitated in both exaggerated and subtle ways these activities, sometimes in silence and sometimes to the Satie music. Morris is imaginative enough to turn athletics into dance, but the work was simply too episodic and disjointed even with his use of repeated motifs—like dancers being dragged across the stage on large swaths of cloth—to give the work some unity and form. The end result was more of beautifully crafted mime than a full-fledged ballet.

The incredible, mood-enhancing lighting for “Sport” was by Nick Kolin. 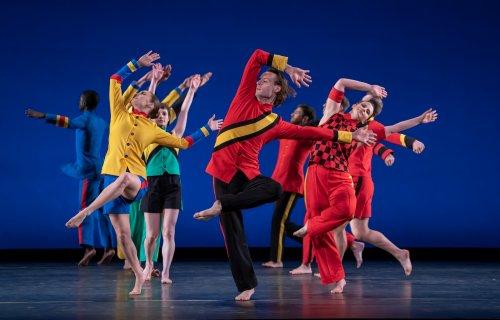 “Empire Garden” (originally commissioned by the Mostly Mozart Festival in 2009) was also informed by the music, this time the clever, yet glum, Charles Ives’ Trio for Violin, Cello and Piano which alternated barely tonal passages with wispy quotes from popular and martial songs from Ives’ early 20th century period.

Opening with a dramatic silhouetted tableau—again, an idea repeated until the last seconds of the work—the 15 dancers in Kurtzman’s brilliantly colored evocations of military band uniforms marched about in formations before breaking up into distorted, angular positions, jiggling shoulders and pointed gestures. Several times a single dancer was raised about the other as if giving a speech to the masses, here represented by sculptural groupings of the performers.

Whether Morris was mocking a more innocent period in America or just interpreting what he found in Ives’ complex score was difficult to discern. The work was performed with pinpoint accuracy and verve by the cast illuminated by Nicole Pearce’s masterfully ominous lighting. 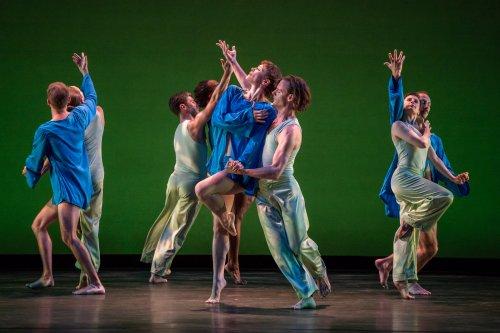 The most exuberantly gleeful work, and the oldest on the program, was “V” to Robert Schumann’s Quintet in E-flat major for Piano and Strings. Martin Pakledinaz’ costumes helped the audience to follow Morris’ formal patterns. Half the dancers wore pale green two-piece attires, the other deep blue variations, all made of flowing, silky material that often gave the illusion of floating. Michael Chybowski’s lighting made the costumes glow and also mirrored the romantic mood of the Schumann score.

True to its title, “V” used formations in that shape as well as moving lines that criss-crossed swiftly. Here Morris seemed more concerned with manipulating large groups of dancers in clever ways rather than emphasizing the camaraderie of these extraordinarily exuberant movers. He inserted a number of ballet steps that didn’t jibe with his more naturalistic movements—runs, lunges, low lifts and twirls—and were awkwardly performed by this barefooted company. Nevertheless he managed to fill the stage with eye-catching, decorative patterns.

The dancers were all brilliant and decidedly not from the same mold. Watching this diverse group of artists perform is like witnessing a microcosm of the world, an ideal world where all conflicts are solved with music and dance and led by a beneficent ruler.