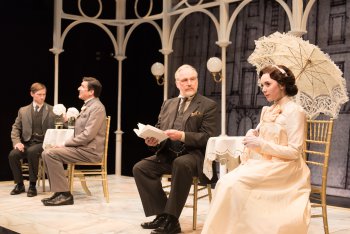 Begun in 1885, and completed and first performed in London in 1892, Widowers’ Houses was George Bernard Shaw’s first play. He was 36 years old and would be awarded the Nobel Prize in Literature in 1925.  This excellent revival is a fascinating opportunity to observe that the themes and style of writing Shaw would later become known for in his later works was there from the beginning.

Young, upper class Englishman Dr. Harry Trench is vacationing in rural Germany with his pompous best friend William De Burgh Cokane.  Trench is becoming romantically involved with the temperamental Englishwoman Blanche. She is the daughter of Sartorius, a wealthy self-made widowed businessman, and they are also staying at the same hotel.

When the subject of marriage is discussed, Sartorius will only give his consent if Trench’s relatives fully accept Blanche into the family.  Back in London, complications arise when it is revealed that Sartorius’ wealth is derived from owning several infamous slum dwellings.  Having taken care of many poor people housed in them as a physician, Trench is confronted with a moral dilemma.

While Widowers’ Houses is clearly influenced by his idol Henrik Ibsen with its shocking revelations and mockery of middle-class societal morality, Shaw entwines the plot with comedy and blunt pragmatism as he would later in Mrs. Warren’s Profession and Major Barbara.  As in those and in his many other plays, his characters verbosely state their opinions and observations often at length.  The result is drawing room comedy with depth. 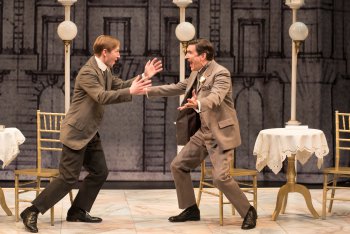 Director David Staller has ingeniously staged this small-scale production with numerous theatrical flourishes.  Scene transitions are accomplished with actors in character moving furniture, there are hilarious slapstick bits, voice-over recordings are heard representing a character’s thoughts and the very precise stage choreography all enrich the presentation while faithfully representing the author’s intentions.  Mr. Staller has also assembled a first-rate cast of talented actors who are all expert at crisply delivering Shaw’s wordiness while sustaining vivid characterizations.  There is also clever double casting.

As Trench, the animated Jeremy Beck wonderfully depicts the good doctor’s emotions and sympathetic personality with his classical and personable presence.

Jonathan Hadley is supremely effete as his socially preoccupied best friend, Cokane.  Mr. Hadley’s mellifluous voice, vibrant physicality and lively facial expressions mark his grand performance that is like that of a fop out of Molière.

Alternating between lavish graciousness and steely gruffness, the bearded and imposing Terry Layman is exquisite as the archetypal Shavian tyrant Sartorius.

Hannah Cheek riotously appears in two roles and verges on scene stealing with her comedic perfection.  First as a feisty German waitress (changed from a waiter in the original text) and then as a stereotypical London parlourmaid, Ms. Cheek makes a great impression as these stock characters.

A large white backdrop curtain with a black drawing of the exterior of a large house that is surrounded by white arches resembling street lamps are the beautiful hallmarks of Brian Prather spare Cecil Beaton-style scenic design along with gold wicker chairs and tables. 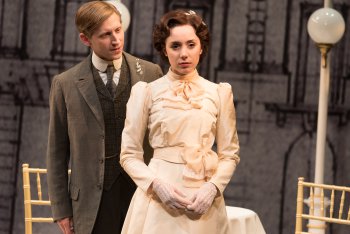 Presented by TACT (The Actors Company Theatre) whose mission is that it “reveals, reclaims, and reimagines great plays of literary merit,” in association Gingold Theatrical Group which specializes in reviving the plays of Shaw, Widowers’ Houses entertainingly achieves these goals with this play whose themes and concerns remain topical.